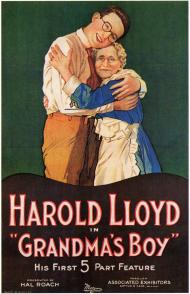 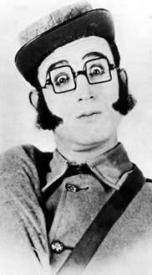 Grandma’s Boy holds the distinction of being Harold Lloyd’s first feature length movie. Although some sources give that honor to 1921’s A Sailor-Made Man, I disagree. That movie runs only 46 minutes, which is rather long for a short, but still nearly 15 minutes shy of feature length. Grandma’s Boy clocks in at just under an hour, making it, by today’s standards, Lloyd’s first true full-length movie. He would never again star in a short film.

Grandma’s Boy was originally intended as a sort of drama. Harold wanted to stretch himself as an actor and to focus a bit more on character development. He plays his usual Glasses Guy but he’s more meek and cowardly than ever. He lets the neighborhood bully walk all over him and monopolize his girl’s attention. He is afraid to shoo away a tramp that has made himself at home in Harold’s Grandma’s yard. The feisty old lady has to do it herself.

When this same tramp commits a robbery and shoots a man, a posse is formed to catch him. Harold is made a deputy but is so scared of his own shadow that he spends the night cowering under his bedcovers. His Grandma tells him a story about his grandfather’s exploits during the Civil War. She tells him his Grandfather was also a coward but was given a lucky amulet by a wizened old crone that gave him special powers. She then produces this same lucky charm and gives it to Harold. I’m sure you can guess where the story is headed from there.

Grandma's Boy does contain humor but the sight gags are less frenetically paced than in most Lloyd movies. In one scene the bully pushes Harold into a well, ruining his best suit. His Grandma gives him his Grandfather’s suit from 1861, which he proudly wears to call on his girl. During the flashback story set during the War Between the States, Harold plays his Grandfather. He looks exactly like Harold only with sideburns. The actor playing the bully is a Union General in a scene where Harold’s Grandfather must steal some secret plans.

Why is it that in movies about the Civil War they are almost always shown from the point of view of the Rebel Army? Lloyd’s Grandfather was a Confederate soldier as was Buster Keaton’s character in The General. Neither actor was from the South. Perhaps it is more romantic to be on the losing side?

On an historical note, I find it interesting that Anna Townsend, the actress that plays Harold’s Grandma, actually lived through the Civil War years. She was born January 5, 1845 in Utica, New York. That’s the very same year in which Scarlett O’Hara was supposed to have been born. Anna Townsend was a spry 77 when she made this movie. She appeared in several other Lloyd comedies, always specializing in funny old lady parts. She died in 1923.

Grandma’s Boy is not Harold Lloyd’s funniest movie but it tells a sweet story and has plenty of heart. 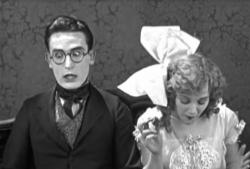 Harold Lloyd once said, during an interview with film historian Kevin Brownlow, “And if I had to choose my favorite of all my films, I would choose Grandma's Boy.” As Patrick wrote, it started off without as many laughs. Following a test screening of the film, when the audience didn't react as warmly to it as Harold had hoped, producer Hal Roach told him, “Harold, you're a comic, you've got to get laughs. Let's go back.” The result is a quite funny little story, but one with a bit of heart as well.

Patrick mentioned Anna Townsend, the actress that plays Harold's Grandma. Her age struck me as well. The advances in technology between the 19th and 20th centuries have been more dramatic than between any centuries in history. When she was a child, could she possibly have imagined that in her old age, she'd be seen by more people than anyone in the history of the world who'd lived before her? Beyond that though, she's quite the scene stealer as the feisty old lady. She and Harold share a couple of nice moments together. She's also still quite game for her age, letting Harold pick her up whenever he wants, and still moving around quite spryly on her own.

Perhaps part of the reason this was Lloyd's favorite of his films is that it's not just one of his thrill comedies. The jokes aren't reliant on the gimmick of climbing the side of a building or hanging off the side of a train. He's still playing his same stock, underdog, but optimistic glasses character, but he's at least a tiny bit more three-dimensional.

A good portion of the story involves the hunting down of a violent hobo. There's one line on the title cards that made me wonder if it didn't perhaps have a double meaning. Mildred Davis's character tells Harold, “Oh, I just KNOW you'll capture the tramp. It's a wonderful chance!” Given Chaplin's most famous creation, I wonder if this wasn't a wink at Lloyd's famous cinematic box office rival. Whether it was or not, Chaplin reportedly enjoyed this film, saying about Grandma's Boy that, "It is one of the best constructed screenplays I have ever seen on the screen.”

As funny and as charming as this film is, it's not my favorite of Lloyd's, even if it was his. I enjoyed it and laughed many times, but I still think that 1925's The Freshman is my favorite of all his features. 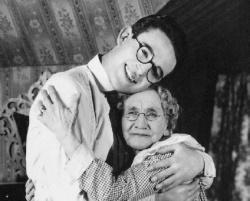 A problem with some of Harold Lloyd's, and for that matter Buster Keaton's, movies are not the films themselves necessarily, but with the audiences that to often watch them in anticipation of a big sight gag. We want to see one that will leave us wondering how they did it and how brave they were for doing it. Neither comic could sustain an entire film on such jokes so there had to be more subtle ones.

Here Harold gets laughed at by a bunch of girls staring at him in his tight pants after they shrink from being pushed into the well by the bully. He gets his finger stuck in a vase while trying to woo his girl. Sure, these are not the jokes that people often talk about when discussing Lloyd, but we cannot fault him for them either. These were silent films and as such he was doing what he could with the medium he had to work with.

One of my favorite bits is the Civil War flashback when Lloyd goes around the table knocking everyone out and places a lily in one person's hand after knocking him senseless. You have to cheer for him when, after his grandmother's story and the amulet, he races into action with new found bravado. The fight scene with the bully is the film's best moment. It lasts quite a while. They fight all over the yard and through a barn. This time the bully ends up in the well.

The one question I have, is what is with all the cats? The bully throws a board at a cat laying on the lawn of Lloyd's girlfriend's house. Later, when listening to his girlfriend play the piano, a litter of kittens bother Harold until he chases them away with a dog statue. When sneaking into the tramp's hideout he walks by yet another cat. Perhaps Lloyd is making a symbolic "scaredy cat" reference, or maybe he just liked cats. Either way, I found Grandma's Boy to be a thoroughly enjoyable film, but a big sight gag would not have hurt. 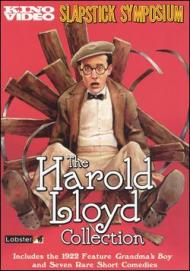