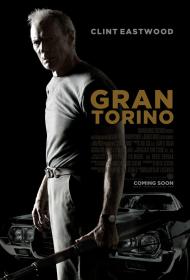 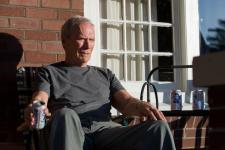 Walt is a part tailor made for Clint Eastwood.

Walt Kowalski is a role tailor made for Clint Eastwood and Gran Torino wouldn't be nearly as good a movie as it is if someone else played him. It is his performance as the crusty, bigoted widower whose life is changed when he becomes involved in the lives of his young neighbors that makes this an Oscar worthy film.

The movie opens with Walt's wife's funeral. He is a retired auto-worker living in the same neighborhood in a suburb of Detroit where he has lived for many years, despite the deterioration of the neighborhood and the fact that apart from himself, the entire block is now populated with Hmongs, an Asian subgroup of Vietnam and Laos. He's grumpily and humorously bigoted towards everyone and everything. He spends his time tending his house, his dog and his Gran Torino, a classic car that he helped assemble on the line in 1972.

When a teenage neighbor boy gets into trouble with a gang, Walt is forced to intervene. He soon finds himself caught up in the boy's (Thao) life and the life of his spunky sister, Sue. He's able to connect to them and teach them in a way he's unable to connect to his own family, who seem more interested in protecting their inheritance than they do in spending time with him, although to be fair, Walt is clearly not an easy person to get along with.

The movie moves inexorably towards its violent climax, but the ending might surprise you as it both was and wasn't what I was expecting.

The Hmong cast is mostly made up of non-professional actors and unfortunately sometimes it shows. Ahney Her is good as Sue most of the time, but in the scene where she is confronted by a group of gang-bangers and she has to be tough and smart-alecky, she doesn't quite pull it off. Likewise, Bee Vang as Thao, is adequate, but is unable to pull some of the movies tougher scenes.

But let's face it, this is Clint's movie and everyone else is just supporting him. And he plays his part like the old pro that he is. He also directs with his usual efficiency, keeping the movie ticking along at a nice pace.

At times this movie feels as old-fashioned as Walt. It's kind of like a Western set in modern times, with Clint as the retired gunslinger brought back out for one last fight. In the hands of someone else that have might seemed corny, but Clint makes it work.

Some movies you have to review with your heart and not your head. Gran Torino is one such movie. Intellectually I could nit pick certain things but I was so completely entertained and moved by it that I won’t go there. As Scott said the part of Walt is tailor made for Eastwood and he shines in what he has said will be his swan song as an actor. Think of a much older Dirty Harry with a bit of Archie Bunker thrown in. That’s Walt.

This movie makes a simple yet profound observation about race. It shows that most stereotypes have some basis in reality. It also shows that name calling can be both hurtful and humorous. Politically correct it isn’t, thank God. Walt is a product of his generation. A Korean War veteran and a product of America’s Golden Age of auto production. His relationship with Thao allows him to finally confront his demons while he provides a much needed father figure for the boy.

Gran Torino is also quite funny. Especially the scene where Walt takes Thao to the barbers and teaches him how to talk and interact properly with other men. Eric, I thought of you during this scene, I think you will find it as funny as I did.

I agree with Scott that this movie is quite old-fashioned in some ways but at the same time is very relevant to 2008. It used to be, for example, that movies with teenage gangs were nearly all just white vs. black or maybe Puerto Rican. Now there are Mexican and Asian gangs as well. I find it interesting that the one thing all of these gangs have in common is the music of Hip Hop. It has become truly universal.

Here’s hoping Gran Torino isn’t forgotten by the Academy. Clint deserves a nomination for Best Actor. This little movie wears its heart on its sleeve and what’s wrong with that? 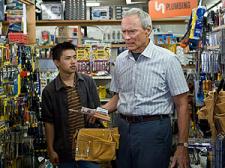 Walt shows Thao what tools he needs. Too bad Eastwood did not show Vang what acting he needed.

I never saw Walt as a bigot. Sure he calls people by derogatory names, but it is not so much too hurt them as it is just his way. The scene Patrick mentioned in the barber shop demonstrates this. Walt has fought for his country, lived a long life, married and raise two sons. He feels he has earned the right to speak his mind in any way he sees fit. Sure what he says may offend those who are thin skinned, but he really just wants to be left alone. He never goes out of his way to bother anyone, at least not until he is bothered first, and as Patrick wrote, many of his outburst are quite funny.

Eastwood makes this movie. His every grunt speaks volumes about Walt’s personality. Here is a man who no longer recognizes the world around him. Not only are the neighbors all ethnically different, but most young people bother him with their rudeness, ignorance and abrasive manners. His home and his car are the last things he has that connects him to happier times.

His sons have no need for him. They are financially set with wives and kids. It takes a poor, fatherless neighbor boy, Thao, for Walt to find a purpose in life again. Through Thao, Walt is able to right an old wrong and be the hero he has been inaccurately decorated as. The climax is a surprise and a great final scene of an amazing actors career.