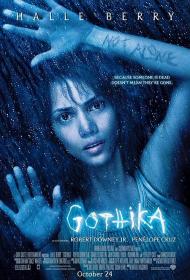 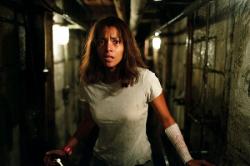 With some movies, particularly those of the supernatural variety, it pays to turn off your brain while watching. Gothika is such a movie. Oh sure, you could pick it apart for its plot holes, such as how Dr. Grey would never be held in the same prison where she used to work, but to do so would weaken what dubious pleasure there is to be gleaned from it. Taking each scene and frightening "jump" moment as it comes without trying to analyze it is definitely the best way to go with this one.

The plot, as revealed in the trailers, involves Dr. Miranda Grey (Berry), who works in a women's prison for the criminally insane. When driving home one dark and stormy night, she sees the ghostly specter of a young girl in the middle of the road. Three days later Dr. Grey wakes up as an inmate in the very prison where she once worked, quickly learning two things. One is that her husband was murdered, with all evidence pointing to her being the killer, and two that the girl she saw in the road has been dead for three years.

There's no doubt that this movie is creepy, but to an improbable degree. The prison, constructed on the outside like some gothic mansion, resembles an insane asylum from the 1800's on the inside (except for the constantly flickering fluorescent lights). This all adds to the spooky factor but takes away from any sense of realism.

At the opening of the film, Dr. Grey is in a session with Chloe (Cruz). During which Grey dismisses Chloe's claims that the Devil comes into her cell every night and rapes her. As the spookiness, including continued sightings of the ghostly girl and the words "Not alone" appearing as if by magic in various places, Grey begins to believe Chloe, or to at least suspect that there's more going on than science or logic can explain.

As the mystery unravels, and borrows from The Ring and The Sixth Sense, there are plenty of scares and thrills. Pretty much any time there's a dark corner or someone's back is turned, you can be certain something will jump out in an attempt to startle you. Enough of these moments work to make up for the ones you can see coming from a mile away.

For a doctor who claims to base her life on logic, Dr. Grey comes off decidedly hysterical even for someone whose husband just died. But perhaps that's just Berry playing to her own strengths; becoming hysterical won her an Oscar, so why not go with it again. The rest of the cast is adequate, including Robert Downey Jr., despite not being given much to do except become a suspect. This is definitely Berry's movie, as nearly every scene is shown from her point of view.

The visual style and scares make up for Gothika's weaknesses and provide an enjoyable movie going experience, especially if you're a horror film fan. 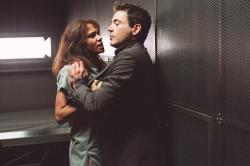 Scott got this one exactly right. Gothika does feature some genuinely startling moments - one in particular made nearly everyone in the theater jump. It also has some reality issues. But then most horror/thriller movies of this ilk do. The ending is also fairly predictable but done with enough flare that it works.

Halle Berry is good as usual. Robert Downey Jr., as Scott suggested, is under-used. He and Halle have a natural chemistry together. It would have been nice to see it progress a bit farther.

The over-all tone of the movie is very dark and unrelenting. I found myself getting frustrated watching Dr. Grey get stalked by the spectral girl figure. In one of the movies best moments the Dr. (impatience and anger finally overcoming fear) yells at the top of her voice… 'What do you want!!?' From this point on the movie shifts away from the supernatural and becomes more of a thriller.

Charles Dutton, most famous for his role on the television sitcom 'Roc', is good as Dr. Grey's husband. In a few short scenes he makes a lasting impression.

Halle Berry is reason enough to see a movie. And though this material is inferior to her talent it is still worth checking out. 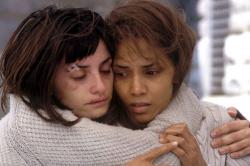 Gothika reminded me of Alfred Hitchcock's Rebecca (1940), where a woman finds herself in a creepy setting with suspicious characters and some unanswered questions.  Like Joan Fontaine, Halle Berry spends most of the movie in a large single building trying to figure out what is going on around her.  The formula is updated with some modern special effects and more action, but it's greatest strength remains the disturbing setting that wreaks of sinister opportunities.

Insane characters can be written to do anything without the writers having to justify their actions.  They simply have to establish that the character is nuts and leave it at that.  Gothika however, makes a great sympathetic point about the mentally challenged.  In an early scene, Miranda (Berry) tells a patient (Cruz) to trust her.  The patient responds, "You can't trust someone who thinks you're crazy."  Later in the movie Pete (Downey Jr) asks Miranda why she does not trust him and she repeats, "Because you can't trust somebody when they think you're crazy."

Like Scott, I noted some questions within the plot.  If the ghost of the girl wants to use Miranda to get revenge and solve the mystery, why does she nearly kill Miranda several times?   At one point Miranda says of herself, "I am a rational person. I believe in science. I don't believe in the paranormal, and I don't believe in ghosts."  If this is true why did MIranda not suspect that a man was sneaking into Cruz's room and raping her when she described the repeated rapes in terms of it being a demon?

The cast is interesting in that Cruz has a small role and is not made up to look good.  Even though he had been in movies for two decades, Downey Jr is in a supporting role.  Up to this point he was mostly starring in art house films, and "B" movies.  Chaplin being the biggest exception.  Berry works the hysteria to a bothersome level.  She rarely acts the rational person she claims to be.  At one point, my wife walked in from the other room and said, "What is that screaming?  It is so annoying!"

Gothika's setting and setup received more priority than the story. Everything takes place in dim lighting.  When Miranda hides in an indoor swimming pool the guards never think to turn on the light.  It is a hospital, it would have a back up generator.  I watched Gothika at night and it was worth a few frights, but not enough that I will ever make a point to watch it again.