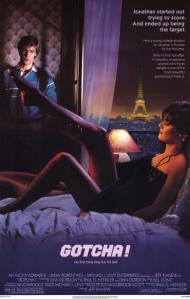 Gotcha! is a movie I loved when it first came out. I was the age of the main character and thought Fiorentino, and her accent, was the sexiest thing going. I showed this film to my fifteen year old and wondered if he would like it. I also was curious to see if I would still find something in it to enjoy.

Jonathan is a college undergraduate who plays a game on campus called Gotcha. It involves different students assigned to hunt each other with paint ball guns, and then "assassinate" them. Although he is good at this game of make believe assassinations, he is a huge loser with the ladies. His best friend, Manolo, is a stud who offers him sage advice on picking up women. "Just look them in the eye and say, "What time should I pick you up.""

Together, they fly to Europe for spring break. At first it seems Manolo will get all the action and Jonathan none. Fate steps in and Jonathan meets a beautiful girl named Sasha. She likes him for his innocence, and soon makes a "man" out of him. The price for the sex education is that she wants him to go to Berlin with her. In 1985, the Berlin wall was still up. West Berlin was the "American" side and East Berlin the "Russian." She reveals that she is a courier and that they must go to East Berlin to pick up a package.

Before you know it, Sasha is sneaking off for private meetings. Russians start following them around. Jonathan eventually becomes the courier. He gets chased and someone dies in his arms. After finally making it back home, he discovers the truth. He also finds out that he is not out of danger. He ends up playing Gotcha for real.

This film could not be made today without some serious editing. The whole Berlin sequence would have to be rewritten with another city in mind, since the wall came down. The sight of a college student running around campus with a gun is far too startling after recent campus shootings. Manolo would have to change one of his pick up lines. He gets a girls attention by claiming to be a Terrorist. "Swedish chicks dig terrorists."

The movie is a complete time capsule. The soundtrack is typical 80s techno pop. It even features Frankie Goes to Hollywood's Relax. My fifteen year old kept pointing out that the mere presence of a modern cell phone would have changed the out come of many scenes, let alone resolved the entire plot from the get go.

Although I still enjoyed this movie too a degree, it does not hold up very well. As my son also pointed out, there is not much action. The one death scene is not intriguing. The tension hardly registers. The best dramatic moment comes when Sasha tells Jonathan to, "Meet me at the Café Friedrichstrasse." Which is code for, "run away now!" I did not find Fiorentino as attractive this time around. Her hair cut is a bit to asexual. The accent I once found so alluring, is now a bit harsh on the ears.

Although this movie did not live up to what I remembered, it will always create a special memory for me. A couple of years after this film came out, I took a trip around Europe with a friend. Like Manolo, my friend Manuel is Mexican and a real ladies man. Like Jonathan, I am not. We did not get involved in any espionage, but this movie brought back many memories of that vacation, and for that, Gotcha! was worth the watch.

Eric, I wonder if it was because this movie didn't live up to your memory or if you were just too influenced by your son's reaction, but you are far too harsh towards this enjoyable little movie. Although it is dated, being very much of the 1980s, it still manages to entertain today. Okay, so it's not a classic, but as far as lighthearted, fast-paced movies go, it does the job. I am willing to concede that nostalgia played a part in my enjoyment.

Although today many people only think of Anthony Edwards as the guy who used to be on E.R., in the mid-80s his movie career was going strong. He appeared in Revenge of the Nerds in 1984, this film in 1985, and Top Gun in 1986. His director here, Jeff Kanew, also directed him in Revenge of the Nerds. He does a good job in the lead role, despite looking a little older than the 18 he's supposed to be, being 23 at the time. Still, he manages to play the innocent abroad believably and even by the film's end, when he's gained confidence, it's not overdone. He's not suddenly James Bond or anything, just a little more self-assured than when the film began.

I agree with Eric that the tension isn't that strong. The tone is too light for the audience to ever really feel that Jonathan is in true danger. There's also little mystery or pay-off to the courier operation. We never learn, for instance, what was on the film that Sasha goes to such trouble to smuggle out of East Berlin.

And talk about dated. Nowadays you'd only have to email or text the photos to someone to get them safely away and the very idea of a film canister seems quite quaint.

Fiorentino's haircut is very much of the time, but I for one still found her very sexy indeed. And I wouldn't care what accent she used.

Paintball was fairly new around the time of this movie and reportedly real Gotcha type games were being played on campuses around the country. This is supposedly the first Hollywood film to feature one of the guns. With all of the shootings on campuses, as Eric mentioned, I doubt it's a game still allowed to be played so openly and so freely on college grounds today.

The music does add to the nostalgia factor. There are actually two Frankie Goes to Hollywood songs on the soundtrack; "Relax" and "Two Tribes". And I imagine Eric, you probably had to explain to your son the running "I Love L.A." joke between Jonathan and the punk band he meets.

Okay, so maybe nostalgia played a huge part in why I enjoyed this movie and maybe kids today won't enjoy it nearly so much. I could see however, with some major rewriting (maybe a visit to South Korea with a crossing into the North?), this movie being remade today. The general gist of the plot is fun and losing your virginity to a sexy foreign spy never goes out of style no matter what the decade. 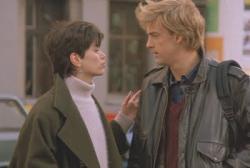 Eric is correct that many things in this film would have to be changed today for the story to make sense. But that fact alone doesn't make it a bad movie. Complaining about a cell phone or email is silly. After all cell phones and/or the internet would change the plot of nearly every movie made prior to their invention. And you wouldn't fault a modern movie that was set in the 80s for not featuring modern conveniences.

Scott freely admitted that nostalgia improved the movie for him. It did the same for me. I graduated from high school right around the time it came out. The clothes, hair styles, cars (and just about every thing else) really took me back. Even though I hadn't seen the movie before, it did provide a strong jolt of nostalgia. I know I'm getting older because rather than seeming old-fashioned the style and look of the movie seemed quite normal.

Anthony Edwards lacked movie star charisma. He's extraordinarily ordinary, but that works for the role here. It is fairly believable that he would be so gullible and naive about women. He falls for Sasha's lies without a second thought. Of course once she goes to bed with him she's got him. He's an average looking 18 year old virgin and she's a sexy, sophisticated older woman. At one point his buddy Manola even tells him that his, “Little head is thinking for his big head.”

Linda Fiorentino looks and speaks like a great star. Her face was stunningly beautiful and that smoky voice unforgettable. She had charisma to spare and should have had a greater career than she did. She may not have been the world's greatest actress but she was a Movie Star.

Gotcha! spoofs several other movies. Among them the James Bond series. The plot itself is James Bond lite. Jonathan travels to exotic locales and sleeps with a beautiful babe. At one point he even introduces himself as, “The name's Moore. Jonathan Moore.” Roger Moore, of course, was the current 007 in 1985. Clint Eastwood's catchphrase from Sudden Impact gets trotted out, “Go ahead, make my day.” And they even went all the way back to the forties to paraphrase the most famous line from Treasure of the Sierra Madre. At the climax of the movie Manola tells the CIA agents, “Don't show me your badges, we don't know nothing about no stinking badges.”

As a bit of escapist fluff -with the added benefit of a thick layer of nostalgia for those of us of a certain age- Gotcha! works. It wants nothing more than to provide breezy entertainment, and at that it succeeds.