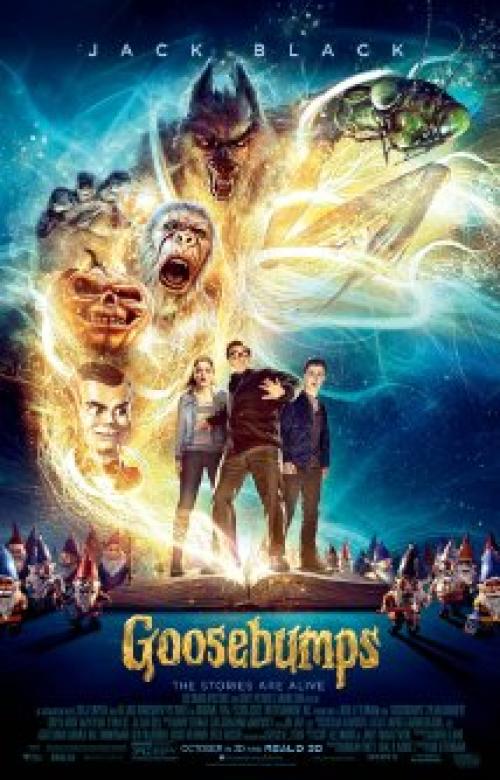 Jack Black, as R. L. Stine, proudly states at one point in the film that his books have sold over 400 million copies worldwide. According to Wikipedia, that number was accurate as of 2008. That makes him one of the most successful authors of all time. He has also helped to produce a television series based on his Goosebumps books and now there is this feature length theatrical film release. He has written hundreds of books but it is his young adult Goosebumps series that are his most famous. They all feature mildly scary elements and monsters suitable for the rated PG crowd.

Dylan Minnette plays Zach, the only child of a single mother, as his father has recently died. The film begins with them arriving in the small town of Madison, Delaware where his mother has just been hired as the assistant principal of the local high school that Zach will be attending. Before he can say, “I am lonely.” he meets the cute girl next door, Hannah played by Odeya Rush, who looks like a young, unglamorous Mila Kunis. Zach also gets a best friend/comic relief, named Champ.

Hannah just happens to be the daughter of a fictionalized version of R. L. Stine, whose monsters he has written about, come to life when the original manuscripts he keeps locked up are opened. One night, Zach and Champ sneak into Stine’s home thinking Hannah is in trouble. She is actually safe until they end up accidentally opening one of the books, releasing the Abominable Snowman, the first of many monsters to be freed. The three teens and Stine must find a way to get them all back in their books before they destroy the entire town. What follows is a CGI filled romp of chases and plenty of fun suitable for the entire family, minus the very young who may find some of this actually scary. My eleven year old nephew found the dummy to be creepy.

There are plenty of jokes to help keep it all very light and family friendly. There is some physical humor such as when the invisible boy slaps Champ. Zach’s flirtatious aunt, played by Jillian Bell steals all of her scenes, whether bedazzling something or pondering her relationship status. Jack Black goes from playing Stine as an aggressive recluse, “You see that fence?” he yells out his window to Zach. “Stay on your side of it.” He later rants about Stephen King but my favorite line of his is, “Every story ever told can be broken down into three parts. The beginning. The middle…And the twist.”

Originally slated for an August release, before moving to October 16, Goosebumps makes for a perfect seasonal movie going experience for the middle schoolers in your family. No one is shown being killed. The only blood is a minor scratch Zach gets on his forehead. There is no swearing and the love story never goes beyond a kiss and a hug. Let your inner twelve year old out and you too will find yourself enjoying some fun family friendly frights, even if you do not actually get any goosebumps.