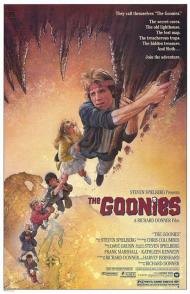 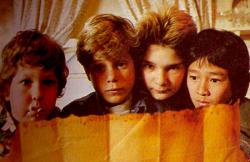 The Goonies should have become a classic family film. It has entertaining child characters with a pro family message. It is just too bad that the creators of this movie shot themselves in the foot making it.

The Goonies are a group of likable kids. There is the leader Mikey, his big brother Brandon, his friends Mouth, Chunk and Data. In true Hollywood stereotype, the bad people are rich folks who want to foreclose on the Goonie's entire nice middle class neighborhood.

To help save their life, as they know it, the Goonies use a pirate map and search for buried treasure. Along the way, they come across some bad guys who just broke out of jail with the help of their bossy mother, played by the always-funny Anne Ramsey. She has the most memorable line in the movie when she says, "Kids suck!"

The Goonies end up in caves making like 6th grade versions of Indiana Jones. They dodge falling rocks and bats. They traverse water falls, experience a first kiss, hit a far out water slide, and make friends with a "monster."

Sean Astin has some dopey dialogue as the dreamer in the group. "It all starts here." He dramatically says to no one in particular when they first find the tunnel. His "This is our time." speech to the group, as they are about to give up, is overly dramatic. As is the scene where he gets teary eyed when he talks to One Eyed Willie's skeleton. However, Astin plays it all with such sincerity that it does not get as cheesy as it could.

Jeff Cohen, as Chunk, steals the movie. Chunk is the funniest goony. His constant yelling and out of breath talking is almost nonstop. When the bad guys catch him and demand that he tell them everything, he takes them literally. He confesses to every bad thing he has ever done in his life. It is the funniest scene in the movie.

Where this, otherwise good, movie goes wrong is in the language. This is a family oriented movie, aimed at elementary school age kids. Yet, this movie includes all of the following words and terms, some more than once; hell, shit, damn, ass, bullshit, damn it and rotten bastard. Not only that, Mouth translates packing instructions to a Spanish-speaking housekeeper. He plays a joke by changing the actual instructions. He tells her that each dresser drawer contains a different drug; heroin, cocaine and speed, and not to mix them up. He tells her the attic is where they keep sexual torture devices.

Steven Spielberg, who produced and is given writing credit, reedited ET because he regretted putting guns in it. I wonder if he regrets the offensive dialogue in The Goonies. Even if you defend the dialogue by saying some kids that age talk that way, you are off base. This is a fantasy kids movie not Scarface Jr. The language is out of place.

I sat with my sons to watch, what I remembered to be, a good movie. I did not enjoy having to constantly point out to my sons that the kids in this movie use lots of dumb words. I had to lie about the translated captions to not have to explain drugs and sexual torture.

The Goonies is fast paced movie with lots of little detail thrown at you quickly. It really takes a second viewing to catch all of the dialogue. I will not soon let my sons have a second viewing, as their mother and I do not find children who swear at all amusing. What parent does? A little bit of editing and this movie could have become an annual Halloween tradition. 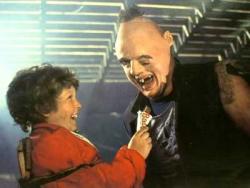 Jeff Cohen in The Goonies.

With all due respect Eric, this movie is clearly rated PG. It never claimed to be a G-rated family movie. Your outrage over the language seems a bit extreme. That said I agree with you that Chunk steals the movie. He has many laugh out loud moments. I wonder what ever became of Jeff Cohen? He was a talented child actor.

As a Steven Spielberg Production Goonies obviously had a decent budget to work with and the sets and special effects hold up well all these years later. I never saw it upon its initial release and only recently watched the entire movie. It is a fast-paced and exciting adventure movie.

I learned one interesting detail from the DVD. At the end of the movie when Data is excitedly telling the adults about their adventure he mentions a giant octopus which we never saw. It turns out that he wasn’t being hyperbolic. There was a scene that was cut from the final print that featured a giant octopus. It is included in the extras. The creature looks incredibly fake so it was a smart decision to leave this scene on the cutting room floor.

The acting by the four young “Goonies” is very good. Ironically, older teen Josh Brolin gives the most amateurish performance. He has definitely improved with age.

Whether the credit belongs to Spielberg or director Richard Donner, the story is perfectly paced. The characters are introduced in an amusing way and the plot kicks in right away. We go on the adventure right along with these kids and it is scary and exhilarating. Sorry Eric, but a few bad words or not I think this is a classic kids movie. 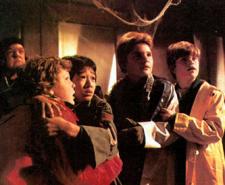 As an adult watching this for the first time, I was only mildly amused.

I don't know that I would call this a classic, but that is probably because I only just saw this movie for the first time through the eyes of an adult. I have no problem with the bad language certainly. I swore prolifically as a child and it never did me any fucking damage. Plus, Eric I thought you'd be ecstatic by the fact that at the end of the movie, when all of the children are reunited with their parents, you see quite clearly that all of the Goonies come from two-parent households! That's a first in a Hollywood children's movie, isn't it?

My biggest complaint was the slapstick humor of the villains. They never present a real threat. There's nothing about them that's even the slightest bit scary. I also found Shortround, I mean Data, to be just as annoying here as he was in Temple of Doom.

Chunk does get the funniest bits in the movie. I don't know quite why, but when he throws the Baby Ruth and hits Sloth in the forehead, I cracked up. And as Eric says, when he starts spilling his guts over every little misdeed he's ever done, it's easily the funniest moment in the movie.

I thought I had this movie figured out. At one point in the movie they discover a Lou Gehrig baseball card on a dead body. I thought for sure that the end of the movie after they'd lost the treasure that Mikey was going to pull that card out and find out that it was worth thousands of dollars and save the family house that way, but they never mentioned it.

I'm quite sure that if I had seen this movie as a child I would have loved it. As an adult watching it for the first time, I can only say I was mildly amused.