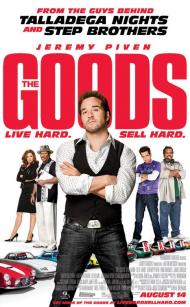 Not as funny as it wants to be.

The Goods: Live Hard Sell Hard does try to sell itself pretty hard, but it falls just short of delivering the goods. It does provide some laughs but overall isn't very satisfying. Co-produced by Will Ferrell (and with a cameo appearance by him) it feels very much like his style of comedy, but Piven is no Will Ferrell and never quite shoulders the movie nor embodies the character of the supposedly super-successful salesman.

As far as plots go this one is pretty simple. Piven plays Don Ready, a free-lance car saleman who, along with his team, goes around to car lots that are in trouble and helps them sell their inventory. In this case he is called to Selleck Motors, a rundown car lot run by Ben Selleck (Brolin) and his misfits salesmen. Selleck is under pressure to sell his lot and he wants to gamble on one last big sale to keep the lot open.

Piven lacks the charm to really pull off the lead role. Don is supposed to be the world's greatest salesman, able to talk anyone into anything, but frankly he's just not that charming. Near the beginning of the film he supposedly talks a flight attendant into allowing him to smoke on the plane, but his speech isn't nearly as persuasive as everyone acts like it is. That's partly due to the script, but also because of Piven. I'm not a Matthew McConaughey fan by any means, but Don should have been played by someone more like him.

It is the supporting cast though that provide most of the laughs, although not all of the jokes work and sometimes it seems like everyone is trying just a bit too hard. The character who made me laugh hardest was probably the old war vet who constantly over-reacted to everything, but the sole female salesperson is a close second and Brolin generates a few laughs as well. Ving Rhames on the other hand is given an unfunny storyline about never having made love to a woman.

One of Piven's few funny moments comes when he tells the story of how his old partner died. His partner is played in a flashback (and in a vision) by Ferrell. It's just a cameo appearance but it's one of the funnier moments.

As the poster makes a point of telling everyone this movie is from the makers of Talladega Nights and Step Brothers. In a nutshell that should tell you everything you need to know about this movie. If you found things to laugh at in those movies you'll find enough to make it worth your while to see this one. It shares both of those movie's comedic sensibilities. 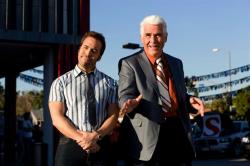 I agree completely Scott.  Goods: Live Hard, Sell Hard is not as funny as it thinks.  It relies too often on juvenile lines, "Everyone here told you their story, here's mine... I have hair on my balls and I sell cars. The end. " "Ahhhh, it feels like a Smurf jizzed all over my face!"  "If he moves that car, I'll eat my own pussy."

The problem with this kind of comedy is that everyone is delivering the punch lines and no one is the straight man.   Brolin should have been playing a much more grounded conservative character shocked by the way these people do business.  Instead he gets lines like, "Look, I may be old fashioned, but when a man tells me to wear my boner pants I wear my boner pants."

The closest the film gets to one is Jonathan Sadowski as Blake.  Don thinks he is his long lost bastard son.  Blake even remarks how much taller he is than Don in a scene where Don is talking as is father.

I like Rob Riggle and wondered how far the pedophile seduction would go.  Riggle plays a child whose body is middle aged.  Don't ask!  Babs drools over him most of the movie, flirting continuously.  Yeah this movie is that desperate for jokes.  Maybe Hollywood should stop buying screenplays from middle schoolers.