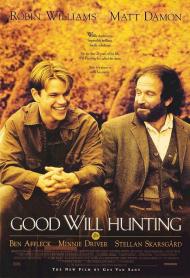 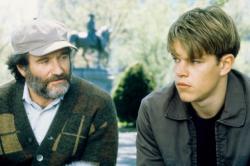 Robin Williams and Matt Damon in Good Will Hunting.

Good Will Hunting is one huge fucking ego trip for Matt Damon and Ben Affleck. A main theme of the movie is how being educated does not exactly mean that you are smart. In one scene Damon, quite sanctimoniously tells a Harvard student, "..you dropped a hundred and fifty grand on a fuckin education you coulda got for a dollar fifty in late chahges at the public library." Later he tells his shrink, Sean what history book he should read. Then just so as to not offend the uneducated working class they include a condescending scene where Will and Sean go one about how being a brick layer of a laborer is a very respectable job. Whatever, you cock suckin movie stahs.

Will is a math genius who was born into a shitty life. He was in foster homes and abused often. Now 20, he works as a janitor at MIT. He hangs out with his 4 best friends in bars and fights with guys they knew in school. Somewhere in there Will finds time to read every text book ever written, and go to the gym because his shoulders do not even look real.

After getting arrested, he is released into the custody of a very insecure professor who wants to feed off Will's genius. Their relationship is gay, only with math instead of sodomy. As part of his parole, he has to see a shrink. The funniest moments come when he outsmarts all of the therapists he sees. That is until he meets Sean, who came from the same neighborhood. After some time they develop a bond. Sean understands Will but the climax of their therapy is complete shit. "Not your fault." Sean keeps saying to him over and over again as Will slowly melts into an emotional cathartic crying fit.

Written by Affleck and Damon, Good Will Hunting is about not being scared of life. It is about having an honest outlook. It is about not being scared to deal with what life throws at you. Even though they made sure to throw in a scene or two where Will says he does not know how to paint or play an instrument, he still comes across too damn pompous. He seems to know a lot about everything, except that it was not his fault that his step dad beat him.

Good Will Hunting is a great movie if you can get past the fact that it is as much of a vanity piece for the writers as it is anything else. I can just hear their egos talking. We know what real education is. We know what history books give the real facts. We can quote famous people. See, we put it all in this movie. We are smart, and did you see my shirtless scene. Yeah, I am buff!