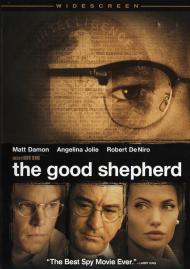 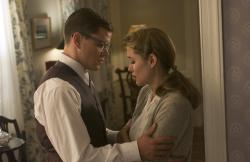 Matt Damon and Angelina Jolie in The Good Shepherd.

The Good Shepherd features great directing and acting by a very talented group of movie makers. The problem is that so much happens and scenes change so quickly that it is hard to keep up with what one scene has to do with another.

The story opens as the Bay of Pigs plays out as a disastrous endeavor. The CIA suspects someone from within tipped off Castro. The movie then flashes back to how one man, Edward, was enlisted into the secret service and eventual CIA. Edwards is a college golden boy. He is a member of the famous Skull and Bones organization. He mingles with the sons of senators and congressmen. He falls in love with a "common" girl but ends up marrying a sister of a fellow Bones member when he gets her pregnant. He ships off to England for the duration of World War II and does not see his son until he is 5 years old.

What follows is a bit confusing. There are American, Russian and British spies all coming and going. Everyone's loyalty is constantly in question. The only time the movie makes sense is when it centers on Edward's personal life. He and his wife do not love each other. He has an affair with his old college flame. The movie's best moments are between Edward and his son who grows up to join the CIA as well. I just watched this movie and do not know exactly who was doing what.

The best this movie has to offer is in the acting and direction, definitely not the editing. Damon is good as the very solemn Edward. He is a character so steeped in secrecy and tension that he hardly knows how to react to real people or normal situations. Jolie is pretty much wasted as his loveless wife. The film looks good the entire time, save for the fact that you may get lost more than once in the plot. 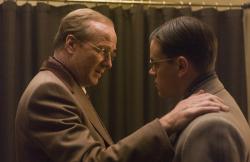 William Hurt and Matt Damon in The Good Shepherd.

Far from being confusing, I thought the whole movie was too predictable. The identity of the "traitor" was pretty obvious from a fairly early point in the story. As to figuring out what was going on, I've no idea which part confused Eric, because frankly I thought there was a distinct lack of subterfuge for a movie about the CIA.

I also don't really think this movie was anti-American either. There isn't any wholesale condemnation of the US or its policies. Just because Damon makes a racist statement doesn't mean the movie is condemning all Americans. It makes a point of portraying the CIA and other government officials as all being from the same rich, white backgrounds with many connections, both familial and educational, but come on, I mean that's how things were back then and in a lot of ways still are. There's always been a Good Old Boy network in this country, and while it might be a little more integrated today, it definitely still exists, and on both sides of the aisle.

The biggest thing wrong with this movie is Matt Damon's character and his motivation. There's only two times in the entire movie that he seems happy. When he's dating the deaf girl at the beginning and when he's first learning spycraft in London during the blitz. Both of those happy periods end badly however and for the rest of the movie and the rest of his life, he's depressed and depressing. What is it that keeps him going in his career? I know the movie sets up his father's suicide to be his motivating factor, but it hardly seems enough for him to condemn himself to a life of misery.

It is one thing to watch a short depressing movie, but it's quite another to watch a long one. Maybe if it was just Damon who was sad it wouldn't have been so bad, but every fucking character in this movie seems on the verge of suicide, with the exception of both of Damon's mentors played by Gambon and De Niro. And both of them have far too small of parts.

Eric is right that Jolie is wasted in her role. Her character is completely underdeveloped. I at first assumed, after it was revealed that she was pregnant, that she had only slept with Damon so that he would marry her, because secretly she was already pregnant by someone else. It was the only explanation I could think of for why she had sex with him so soon. If I'm right, I'll never know, because the movie never explains. And as for why she stays with him for so long, no explanation is ever given for that either. I know it was a different time back then, but people did get divorced even in those days.

So while I don't disagree with Eric about what's wrong with this movie, I do agree with him that there are many things wrong with it. It's too long, too depressing, and lacks real character motivation. 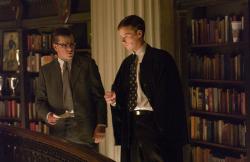 Matt Damon and Eddie Redmayne in The Good Shepherd.

If you aren't paying close attention, there are moments in The Good Shepherd that could get confusing, but it really isn't all that complicated. Like Scott, I figured out who the “traitor” was before Edward found his passport hidden in the binding of that copy of Ulysses. I agree that De Niro does a decent job as director, except for the plodding pace that is. The script is the real culprit, although it starts off well enough. I thought the first hour or so was terrific. But once the war ends the story really starts to meander – and for a spy movie it's really quite dull.

The big picture in The Good Shepherd is the creation of the CIA. Edward represents the ideal person for the job. He's a man and he's a White Anglo Saxon Protestant (the movie's title has Christian overtones, Jesus is often called The Good Shepherd). These were requirements for the job in those days (like Scott I don't consider the movie anti-American just for pointing out this reality). Edward is also intelligent and clear headed. He learned to suppress his emotions at a young age. After all, it takes a strong mental fortitude to be able to hide your father's suicide note, even from your mother.

As his father was distant and cold towards Edward, so Edward is distant and cold towards his own son. It's ironic that the very thing these men strive to provide for their fellow Americans is the exact price they themselves pay for their service to their country; a happy home life. They lead a life of isolation and solitude, never being able to trust anyone they meet. Nor can they confide in their wives or children. The movie sums up this lonely life in the final shot of Damon walking down that hallway, all alone, with only his briefcase for a companion.

The supporting cast is filled with famous faces even if most of them are terribly underused. Eddie Redmayne plays Matt Damon's son as an adult. This was his first American movie and just his second feature film. He has several decent scenes; his best moment comes when he discovers that his pregnant bride-to-be has been killed – and that his father may have had a hand in her demise.

Scott mentioned the lack of clear motivation for Edward, and I agree. Unless the point of the movie was to keep him as generic as possible. All we really know for sure is that he's a WASP with vague daddy issues resulting from his father's suicide. Apparently Edward was based on several real life men who played pivotal roles in the founding of the Central Intelligence Agency but the film is a work of fiction only loosely based on actual events. As such it could have used more zip and flavor. Watching The Good Shepherd is a bit like spending 167 minutes eating dry turkey on white bread with mayo.