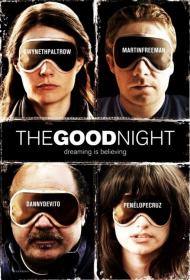 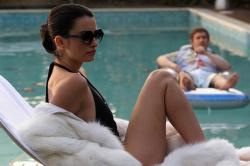 Penelope Cruz and Martin Freeman in The Good Night.

I really, really wanted to like this movie. With a cast featuring two of my current favorite British comedians, Martin Freeman (The Office) and Simon Pegg (Shaun of the Dead), and also starring Penelope Cruz and Gwyneth Paltrow, how could I not end up liking it? Turns out, quite easily.

Unfortunately, the cast is really the only thing this movie has going for it. The plot is mildly interesting and occasionally amusing, but it never grabs you in any real way and you can't help but think that if it wasn't for the fact that first time director Jake Paltrow wasn't Gwyenth's brother, this movie would never have been made.

Freeman stars as Gary, a former pop star reduced to writing incidental music for commercials. He's living with Dora (Paltrow) and their relationship is going about as far as his career. The only joy he finds in life is in his dreams, where he meets Anna (Cruz), a beautiful and sexy woman who is only there to fulfill his every desire.

In an effort to spend even more time dreaming, Gary takes classes in lucid dreaming from Mel (DeVito) and soundproofs his bedroom. And when his relationship with Dora comes to the breaking point, he finds himself with even more free time to dream.

The most entertaining parts of the movie are the humorous ones, but unfortunately, it too often takes itself far too seriously and ends up fairly depressing. Pegg, as Gary's womanizing former-band mate, provides most of the jokes and the movie would have benefited by featuring more of him.

Freeman and Paltrow are both wasted in their roles and could easily win the award for the most depressing on-screen couple in recent memory. Cruz is sexy as hell and it's easy to see why she would be someone's dream girl, but apart from her sex appeal is never given the opportunity to add anything else.

I suppose you could call the ending a "twist", but by the time you get to it, you probably won't care enough about the characters, to care about the twist.

So, despite going in fully expecting and wanting to enjoy this movie, it instead left me vaguely depressed and highly disappointed.