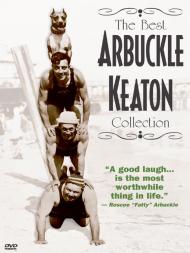 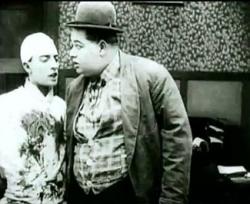 Three years after the making of Good Night, Nurse Arbuckle would be on trial for rape and his career would be over as a result. I am not sure that Arbuckle had much of a future in film anyway. At least not by what this movie demonstrates.

Arbuckle eventually goes home drunk to his wife, who immediately sends him to a sanitarium to have a surgical procedure that supposedly fixes alcoholism. Who knew that was all it took? At the hospital, things pick up a bit when Keaton makes a great entrance as a blood splattered surgeon, carrying a butcher knife.

The pacing improves with Arbuckle getting chased. He tries to hook up with a girl. He even goes drag. It was a gag he had milked many times before. Here he dresses like a nurse and flirts with Keaton, who responds in kind. It is easily the film's funniest moment.

Arbuckle wrote and directed his films but his creativity did not always seem very fresh. Judging by films like this, it was starting to become clear that Keaton was becoming the highlight of their films together. We have no way of knowing where Arbuckle's career may have gone had he never been involved in the Rappe scandal, but it is all too obvious that Keaton's was on the rise. 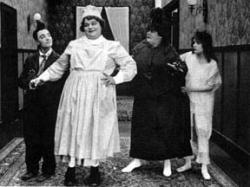 Eric questioned whether or not Arbuckle's career would have lasted and Buster Keaton wondered the same thing. In a 1960 interview with Studs Terkel, Keaton mentioned some advice that Arbuckle gave him shortly after they started working together. Arbuckle told him, "Here’s something you want to bear in mind, that the average mind of the motion picture audience is twelve years old. It’s a twelve-year-old mind that you’re entertaining." A few months later, after learning something of the business, Keaton told Arbuckle, "Roscoe, something tells me that those who continue to make pictures for twelve-year-old minds ain’t going to be with us long."

Personally, I have no doubt that Arbuckle's career would have continued. Not every movie should be aimed at twelve year olds, but it is possible to make a career by doing just that. Go ask Adam Sandler if you don't believe me. There's always room for lowbrow comedy. A better question would be, could Arbuckle make the move to features and sustain a full-length plot. I have a feeling that he would have figured out a way.

All that aside, I quite enjoyed this amusing little short. I agree that things pick up when Arbuckle gets to the sanitarium, but I laughed at the opening scenes of Arbuckle trying to light his cigarette in the rain. As an ex-smoker I can attest that we've all been there.

I do agree with Eric that the most outright funny scene in the entire short is when Keaton is flirting with Arbuckle in drag. The way they smile and tease each other is priceless. The scene is capped by the hurt expression on Keaton's face when Arbuckle manhandles him like a doll, tossing him across the hallway.

Like all of the Arbuckle/Keaton collaborations that I've seen, this one is fast paced and funny. Yes, it's very lowbrow and quite silly, but it made me laugh almost 100 years after it was made. That has to say something about it. 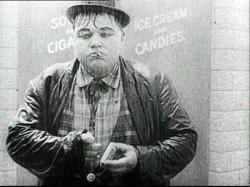 Good Night, Nurse! is quite amusing. Like Scott I laughed at Arbuckle's attempts to light a cigarette in the rain (see photo). I also chuckled when he helps his fellow drunkard get home by writing his address on his shirt, pasting stamps to his forehead and placing him on top of a mailbox.

It really hits its stride, though, after Arbuckle arrives at the No Hope Sanitarium. The hysterical female inmate that runs screaming from her room and leaps on Arbuckle cracked me up. Later she convinces Arbuckle to help her escape only to reveal that she is indeed insane by asking him to help her get back inside.

I concur with my brothers that the scene of Arbuckle in drag as a nurse is the highlight of this two-reeler. The facial expressions by both Arbuckle and Keaton are priceless.

Of course there is a chase sequence. In this one Arbuckle competes in a footrace for overweight men. He is actually running away from the sanitarium but gets mixed up in the race. The ending uses the common gag of having someone awaken from a dream (or in this case from anesthesia).

Even without his career ending scandal it is unlikely Arbuckle would have had as great a career as Keaton enjoyed but that is something we can only speculate about. Good Night, Nurse! is just one of his many short films that retains the power to entertain even today.