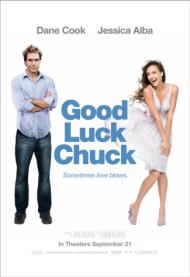 After watching so many movies nominated for an Academy Award, I decide to go light, hoping for some easy going, funny entertainment. I rented The unrated version of Good Luck Chuck. Like every CD Harry Connick jr as put out since the When Harry Met Sally soundtrack, I was sadly disappointed.

Charlie is a dentist who gets more sex than he can almost handle when women start thinking that having sex with him will lead them to their true love. At first he enjoys this new found ability, having plenty of anonymous sex with all kinds of women who want to get a husband. Being that this is a movie, the ladies are all attractive. To prove his ability, he does have sex with one ugly woman, "She's beached over there next to the giant garbage bag full of doughnut holes. Eleanor Skepple. She's angry, rude, and she smells bad. In addition to back acne, she's got front acne and side acne. You see that glass of water there? She keeps her teeth in that glass." Chuck's friend Stu points out.

One day Charlie meets and falls in love with Cam. Granted she is played by the always adorably hot Jessica Alba, but the movie never finds a reason for his being in love with her. Charlie refuses to have sex with Cam because he believes her to be the one, and having sex with her would send her into the arms of another man. They break up and poor Charlie may never find true happiness.

Dane Cook is a stand up comedian and the star of the movie, but most of the jokes come from his best friend Stu. "I'd suck a fart out her asshole and hold it like a bong hit." and " I'll tell you not satisfying. Last night I masturbated into a grapefruit. I put it into a microwave and heated it up a little bit, which helped, but... still." are a couple of his more crude, memorable lines.