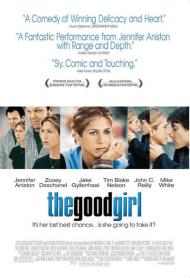 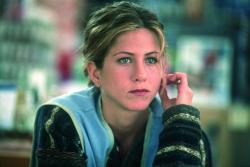 The Good Girl is real life through the Hollywood filter. It tries to portray real people in real situations with only the occasional flight of fancy.

It tells the story of a 30 something housewife who works at the local Rodeo Round-up(think K-mart done Texas style) and is going through a mid-life crisis. She has an affair with a much younger co-worker who is a sort of self-modeled Holden Caulfield caricature. Most of the film is taken up with her dealing with and trying to hide this illicit relationship. Her trying to end the affair and the events this sets into motion take up the climax of the movie.

The best thing this movie has going for it is the characters. They are all distinct and easily recognizable from people we all know. Aniston's character Justine was obviously a cheerleader in high school who got married too young, probably to the football hero of the local high school, only he is now a house painter who spends most of his time smoking dope and hanging out with his idiot partner, who you just know has been his best friend since grade school. The stock boy she has an affair with (Jake Gyllenhaal) is the depressed writer who only writes stories about young men who have been alienated by society, and which all end in tragic death. Even the minor characters who work with Justine in the store are all fleshed out and made real, and not with any lengthy exposition into their pasts, but by simple lines of dialogue.

One of the things being said about this movie is that this is the one that will turn Jennifer Aniston from a celebrity to an actress. Well, whether it will hold true or not, she does a hell of a job in this movie. She manages to submerge herself into this character, with accent and all, so much that you really are able to forget that she is Mrs. Brad Pitt. It is the first character she's played that isn't just a variation of her Rachel character from Friends.

The movie also contains some very funny bits among the pathos. Some of the small scenes in the store involving Justine's co-workers are laugh-out-loud funny. Although I did think that the male full frontal nudity by the character of Bubba was a trifle extreme just to get a laugh.

Where the movie falls down is that in between the laughter and the character study, there really isn't a whole lot going on, and what is going on, is sometimes a little boring. They were trying for 'real life' and sometimes 'real life' just isn't that interesting. Isn't that why we go to the movies, to escape from real life?

In the long run, The Good Girl will be remembered more as a chance for Jennifer Aniston to wet her acting chops than for anything else. 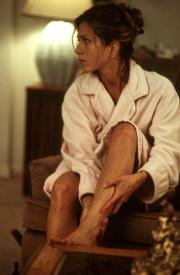 First, I must correct some errors in Scott's review. The store is not named Rodeo Round-up it is named Retail Rodeo. Tom, the Holden Caulfield wannabe is a cashier, not a stock boy.

Scott mentions quite a bit about how much this movie is about representing "real" people. The look of the film definitely does that. From the economical car to the one jacket Aniston's character always wears, the characters all look like common people. The big flaw the director did in going for real people is that everyone walks around depressed or just plain bored. Okay, working in retail is not necessarily exciting, but I do know lots of people who do it and most of them do not walk around in a fog looking numb to everything. In fact, the one cheery character in this movie causes people around her to wonder what she has to be happy about. They don't wonder for too long because she dies half way through the movie.

This movie is about people who are unhappy. I hated the dope smoking husband at the beginning of the movie. He has this pathetic no good friend and just sits around smoking dope and watching TV. By the end of the movie he is the most sympathetic character. He keeps his "friend" around because his friend is the only person who really loves him. He smokes dope to escape his life much like his wife had an affair to escape her life. He believes an obvious lie, because the truth is too painful to face.

This film has a wonderful message about happiness and life. We all desire to escape our lives at some point, and seek happiness. What price are you willing to pay to do it? This couple eventually finds happiness, but it took a rocky road to get there. 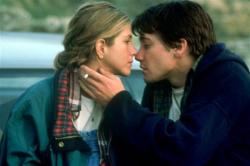 The Good Girl is a dark comedy featuring great acting and an intelligently written script. I was moved by the bittersweet ending. The story does a great job of showing how our choices and actions have consequences that we never intended or even imagined would happen. Justine’s decision to have an affair sets into motion a chain of tragic events.

By the end of the movie she has come full circle and is back to being the titular “Good Girl”. The most realistic thing about the movie is how it shows that everyone is flawed. Ordinary people sometimes make selfish choices that hurt others. Bubba, for example, blackmails his best friend’s wife into sleeping with him but he still genuinely loves Phil. He is Phil’s staunchest ally and worst backstabber at one and the same time.

Although Aniston is great in the movie and carries nearly every scene, the supporting cast is just as impressive. Both Jake Gyllenhaal and Zooey Deschanel have gone on to become big stars and this movie demonstrates their acting talents and screen charisma. It is interesting to note that while Jake’s character in the movie is named for the protagonist in "The Catcher in the Rye", in real life Zooey was named for a Salinger character as well.

Speaking of trivia, Jake’s character’s last name, Worther, is also a literary reference. It alludes to Goethe’s “The Sorrows of Young Werther” in which a romantic young writer falls in love with an older woman, is rejected, and commits suicide.

Mike White, who plays the bible study promoting security guard Corny, wrote the screenplay. He also wrote Chuck and Buck and Year of the Dog. He and his father (both gay men) have twice competed on the reality game show Amazing Race.

Given the weak box office showing of The Good Girl it seems America wasn’t ready for Jennifer Aniston to play a “regular” person. That’s a shame since this is far and away the best performance I have seen her give.