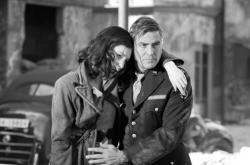 Cate Blanchett and George Clooney in The Good German.

My brother Patrick has long said that old movies are better than modern ones, while I believe the opposite. He enjoys the black and white cinematography with the atmosphere it brings and the larger than life acting that was done by the Stars of those days. I prefer the more naturalistic style of today's actors and filmmakers. With The Good German, director Steven Soderbergh tries to combine elements of the past and the present with, it must be said, mixed results.

Visually and aurally, the movie appears to be one that Warner Brothers might have found in an old vault, restored and then re-released. From the opening credits to the newsreel-like footage of a bombed out Berlin and right down to the sound of footsteps on a wood floor, this movie seems to have stepped right out of the 1940s. Technically, it's a brilliant achievement.

The plot of the movie just isn't as strong as the production values. Told in three parts through the eyes of three different protagonists, the story takes place during the peace talks in Berlin following Germany's surrender. It involves treachery, hidden scientists, an old girlfriend, political intrigue and lots of melodrama. I just never really felt drawn into the story as much as I should have, and maybe that's because the story took a back seat to the production values.

Although the movie looks old, the dialogue and some of the actions are straight out of today's Hollywood. The illusion that you are watching an old movie is dispelled a few minutes in when the scene cuts to Tobey Maguire having sex with Cate Blanchett. Maybe it's this juxtaposition that jarred me out of the story.

Along with the look and feel, the casting is well done. Cate Blanchett makes a terrific 1940s femme fatale and George Clooney has the matinee idol good looks reminiscent of the times. It's Tobey Maguire though, who deserves the most praise. He looks like the young kid from an old war movie; the innocent farm boy who usually gets shot in the last reel. But you quickly learn that he is far from innocent. He's mean, violent and looking out for number one. I only wish his part was bigger. When he's on the screen you're not sure what's going to happen next. With Clooney, the star of the movie, you always know that his straight-arrow hero is going to do the right thing.

Although The Good German isn't the best movie of the year, it's definitely one of the most interesting. It's also one that demands to be seen on the big screen. 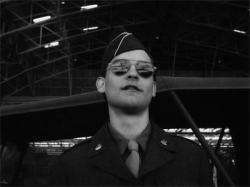 Tobey Maguire in The Good German.

So much has been written about the black and white cinematography in The Good German, but that misses the point of this film. The Good German is typical George Clooney politics. Like Syriana, it spares no expense to bash the United States.

In this film, we meet an American GI named Tully. He is a bastard on every account. Never does this movie go into how he has fought in a war, on a continent he never lived on, freeing people he has no personal connection to. It never mentions how he is living away from his family and surrounded by strangers. No, Tully is just an American bastard taking advantage of the poor Germans. Those same Germans that he was so recently fighting. Those same Germans who, like so many Muslims today, never stood up and denounced the atrocities committed by their kind. I am not defending Tully as being a good guy, but he is completely one dimensional.

Tully is not the only ugly American here. The Good German accuses the American military and it's politicians as selfish hypocrites. This movie has Americans who are willing and wanting to kill anyone who can expose the past of a scientist the American's want to take back to the States.

No doubt their were some black marketeers in post war Berlin. No doubt we looked the other way when it came to our benefit. But I would just like to know why is George Clooney so attracted to movie roles in movies where the United States comes off looking so bad? Because of our free society, Hollywood was allowed to flourish and become a billion dollar industry. Because of The United States he has made millions of dollars for really doing nothing. Come on, he is an actor. He, and so many other liberal movie stars, get paid an enormous amount of money to hit a mark and say a line. And in return he, as well as actors like Danny Glover, repay this country by making movies that criticize it? 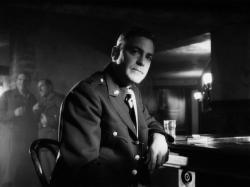 George Clooney in The Good German.

Eric, if anyone missed the point of this movie it was you. There is nothing intentionally unpatriotic about it. Once again you have let your disdain for the liberal politics of George Clooney (who didn't even direct the movie) cloud your judgment. The Good German is film noir. And like all film noir it has a cynical edge to it. The fact that the soldier played by Toby Maguire is an opportunistic asshole (who gets his comeuppance early in the film by the way) is in no way meant to reflect on the United States Military as a whole.

The Good German is historically accurate in the sense that we did have a program called Operation Overcast that was intended to bring German rocket scientists (and their families) to America. Self-preservation is the number one job of any government. Is anyone out there really naive enough to doubt that we would conveniently overlook war crimes committed by certain German scientists if it meant having access to their genius? Remember, this was in July of 1945. We were still in the midst of a desperate war with Japan.

The visual style of the movie is quite impressive. Soderbergh emulates scenes from such movies as Casablanca and The Third Man. The aspect ratio and the way he sets up shots are both very true to vintage Hollywood cinema. As is the acting by the leads, of whom Clooney is the most successful. He possesses the looks, charisma, and presence of a classic Hollywood leading man. Maguire is also quite good and makes the most of his supporting role. Blanchett looks the part of a 1940s femme fatale but she seems rather stiff, and she fails utterly when it comes to emulating the sex appeal of Marlene Dietrich or Ingrid Bergman.

Like Scott I found the sexual content and strong language jarring. The casual use of the word fuck in several scenes seems anachronistic. Why go to so much trouble to make a movie like this if you aren't going to stay true to the style in every way? Did Soderbergh think a little sex and adult language would attract a larger modern audience that might find the look of the movie off putting?

The plot is classic film noir. There is almost always a murder that sets the protagonist in motion. He crosses paths with a female (usually one he had an affair with years before) and she leads him through a labyrinth of danger and intrigue, while hiding some sort of secret about her past. The Good German got all of these details right but it fails to truly engage the audience. Too much time was spent painstakingly recreating the style but not enough thought was put into the script. The dialogue never crackles like it needed to and the other big problem is the lack of chemistry between Clooney and Blanchett. Still The Good German makes a valiant attempt at reviving a long dormant genre.