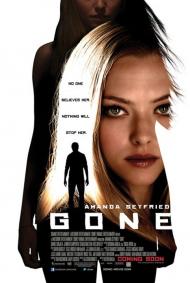 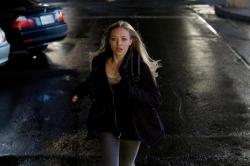 Gone is typical February fare at the movies. It's a poorly written mystery/thriller with a noticable lack of either. The acting is likewise not going to win any awards. The best thing I can say about this movie is that it moves quickly, has a mercifully short run time, and is gone before you know it.

Amanda Seyfried stars as Jill, a young woman with a tenuous grasp on reality. You see Jill's had a rough year. Her parents both died and she claims to have been abducted and held captive in a hole in the ground out in the woods in a remote park in Portland, Oregon. Apparently the police could find no physical evidence to verify her story and no perp was ever caught (none of which is ever satisfactorily explained).

Anyway, Jill spent a few months in the loonybin and when the story begins her sister has moved in to babysit her emotionally fragile sibling. When sister Molly disappears one night, Jill is certain the same man that tried to kill her is back for more. But wouldn't you know it? Those darn police just won't take the word of a mentally unstable woman with such a checkered history. What's a girl to do but load up her pistol and head out on her own, vigilante style, in search of her missing sister and her sister's kidnapper.

The plot makes a point of casting suspicion on several different characters at various stages of the game. Although when all is revealed they needn't have bothered as the climax is without intrigue. And after everything Jill goes through on her desparate journey to locate the villain, the final confrontation is over in a matter of seconds.

Amanda Seyfried deserves credit for playing it all very straight. She makes good use of her large expressive eyes. Some of the dialogue is laughably bad, like the conversation between two police officers about how one of them slept with his wife's sister before he got married.

Anyone wishing to see this movie on the big screen would be wise to get to a theater quickly. I have a sneaking suspicion it will soon be Gone. 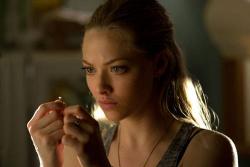 The funny thing about Gone is that while I agree with Patrick that it's not a very good movie, I didn't hate it and I was never really bored during it. Some bad movies will annoy me and some will actually make me angry that I wasted my time and my money, but this one is just bad in a harmless kind of way. The short running time that Patrick mentioned definitely helped.

Amanda Seyfried is the main reason this movie remains watchable despite its faults and plot holes. She's not only easy on the eyes, but she's also a good enough actress to sell the story. You care about the silly shenanigans because she cares about the silly shenanigans. Her investigation is filled with lucky breaks and implausible coincidences. Jill keeps moving fast, in part to save her sister's life, but more importantly to try and stop you from noticing the plot holes.

The rest of the cast features a couple of recognizable faces, but they're all just supporting the one-woman show that is Seyfried. Bentley in particular is only there to muddy the waters and keep you wondering whether or not the kidnapper is someone Jill knows.

As Patrick pointed out, the climax is a big problem. With a thriller of this sort you are waiting for the big finale where Jill will face-off with the man who kidnapped her and her sister. Will it turn out to be someone she knows? Will she have to fight him, while rescuing her sister? Will it be an edge of the seat, fingernail biting moment? A sheer terror filled thrill ride? Surely, the one thing that it won't be is completely lacking in tension and over in two minutes. There's no way they'd end it that way. Right? Right?

This is a silly and unsatisfying movie, but in an oddly inoffensive way. It's certainly not good enough to love, but it's also not bad enough to hate. 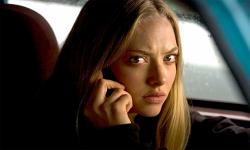 Although unplanned, I watched Les Miserables the day before Gone. Both star Amanda Seyfried but are as different as it is possible to be. Les Miserables is an epic musical where emotions are splashed about like a can of paint being thrown on a wall. Gone does not emotionally engage its audience in the least. I felt for the struggles of Fantine and Jean Valjean while I cared not what happened to Jill.

Amanda Seyfried fares much better in Les Miserables, where her innocent looking face and sweet voice suit her character. As Jill, she is horribly miscast. Jill is a girl who claims to have been abducted but there was no proof that her story was true. Had Jill been played by an actress with some edge we might have questioned whether her story might be made up. One look at the angelic face of Seyfried and there is never a question that her story is true. Had her role been played as more eccentric than it is, I would have better bought that the police would ignore her concerns.

As Patrick wrote, the plot makes a point of casting suspicion on several different characters. In fact, every time she talks to some one it seems that the director wants you to question their integrity. She asks the neighbor a question and he seems very creepy. She talks to one cop who seems a little too helpful. Her sister's boyfriend does not seem as concerned as he should. All is to no avail as none of them lead to any intriguing situations.

Scott found Gone to be bad in a harmless kind of way. That is the film's problem. it is not bad enough to really make fun of but hardly good enough to even mildly enjoy. The best word I can think of to describe Gone is bland. Think of a nice looking piece of lasagna that the cook forgot to add any spices too. It is still lasagna, but you just taste the noodles.