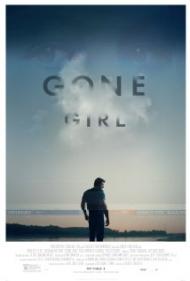 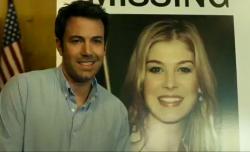 With most mysteries it would be appropriate for me to write that the less I give away about the plot the more you will enjoy the movie. At least that is what I would write if this film was actually worth watching. Gone Girl is a mystery, sort of, but it loses credibility about half way through and then drags on trying to make a valid point about the media and a ludicrous point on marriage.

On their fifth wedding anniversary, Nick Dunne comes home to find that his wife Amy is missing. Through a police investigation and flashbacks, via Amy’s diary, we see the course their marriage has taken. We witness the good times and the bad as their marriage becomes less and less ideal. It begins to look as if Nick has something to hide.

Gone Girl pulls no punches when dealing with the media. We are constantly shown a woman on some CNN type show dissecting the case of the missing wife and her suspicious husband. This film demonstrates how such shows are more about editorializing and speculation than facts. It also shows how the media can sway public opinion. It is a perfect example of the saying, “Tried in the court of public opinion.”

Gone Girl also wants to make some statements about marriage. How every couple has problems that must be overcome as a team or failure is imminent. It also makes the point that each person in the marriage has a different perspective of it. We often see what we want to see in our partner and how we sometimes put on fronts for the sake of the marriage.

The best things about Gone Girl are the performances. Since Hollywoodland (2006), Ben Affleck has proven to be quite a competent actor. Here he plays a man you will question, hate and even pity. Affleck has a balancing act to pull off. We are intended to suspect and then empathize with him. Rosamund Pike has the greatest role of her career here as Amy. She is required to play a wide range of emotions and sometimes go over the top. My single favorite scene is when she puts on a front and walks into Affleck’s arms, who then whispers into her ear, “You fucking bitch!”

With the murder mystery solved half way through, we are left with the after math and how that plays out. This part of the film loses all credibility as it makes little sense. Again, I will not give away details, leaving it for the viewer to discover, if they so choose to torture themselves by watching it. As the lights came on in the theater and my wife and I stood up to leave, a woman sitting behind us summed up Gone Girl very succinctly when she said out loud to her friend, “Well, that was dumb!” 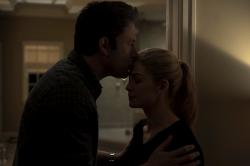 Gone Girl, while much trashier than its marketing campaign has portrayed it, is a better film than Eric would lead you to believe. Yes, it runs too long and yes, the best part is the first act before the mystery is solved, but even in the more outrageous second and third acts, it still manages to entertain.

Based on the best selling novel by Gillian Flynn and adapted for the screen by her, this movie has been generating buzz for the past year, much of it based on the fact that David Fincher (Seven, Fight Club, Zodiac, The Girl with the Dragon Tattoo) is directing. The press followed the casting and has been talking up its Oscar potential for months. With such a build up it's only natural that you'll see it with certain preconceptions. During the first act, the movie lives up to those conceptions. As Eric noted, the acting is top notch. The production is slick and well done. Everything conspires together to make the audience wonder what happened to Amy Dunne (Pike) and what, if anything did her husband Nick (Affleck) have to do with it?

Until the second act begins, the story is dark and suspenseful. Affleck's never been better as a performer and Pike hovers over the story through diary entries that tell the story of their marriage in voiceover. The tone and the story take a sharp turn when we learn the truth of Amy's fate. What was a dark mystery laced with a wicked sense of humor that satirizes our media obsessed culture starts to go over the top in a still enjoyable, but much trashier pulp fiction manner. It's still enjoyable and the moments of humor are still there, but any sense of realism or suspense goes completely out the window. And the third act, which deals with the aftermath of it all, not only feels about 20 minutes too much, but leaves plausibility deep in the rearview mirror.

As Eric wrote, the leads are terrific. Affleck as Nick will force you to empathize and sympathize with him even when you don't like him. And I agree with Eric that this is the performance of Pike's career so far and could push her onto the A-list. The supporting cast is equally good. Carrie Coon is great as Nick's sister Margo as is Kim Dickens as the detective leading the investigation.

Because of all the press attention I was expecting something more serious than the end result. The script contains a surprising amount of humor and as I said, the behavior of some of the characters goes well over the top as the story progresses. I went in expecting something akin to Hitchcock, but by the second and third acts it feels more like Paul Verhoeven/Joe Eszterhas than the master of suspense.

Instead of a prestigious Oscar quality movie, this is more of a soap opera. It's a high quality soap opera, with no expense spared, but still a soap opera. I wouldn't call it dumb, just trashy, but in an entertaining way.

Gone Girl is a mystery/thriller, not a soap opera. It's dark, slick, stylish and bloody. I'm definitely with Scott on this one. Yes it's trashy pulp but it's entertaining trashy pulp. Judging by the huge world wide box office success of Gone Girl, Eric you (and that lady in the theater with you), are definitely in the minority. It follows in the tradition of past thrillers like Fatal Attraction and Basic Instinct. Without giving too much away, all three movies have a key ingredient in common.

The central mystery really isn't all that mysterious. The obvious clues left behind are a dead giveaway. Any detective worth their salt would most likely be able to figure out that a frame-up is going on. The real shock in the story is the extreme lengths the character goes to in attempting to pull it off. Of course it goes far beyond any semblance of reality but as movie entertainment it works. Yes, it could have been trimmed by at least 20 minutes but up to the final scene I wasn't sure exactly how it was going to end. How many movies can you say that about?

Amy Dunne is one of the juiciest female roles in recent memory. Rosamund Pike commits herself to the part 110%. If Oscars were based solely on the amount of effort required for the role then she should win hands down. She plays Amazing Amy with gusto and panache, greedily chewing every bit of scenery in sight. There is no subtlety to the part but Pike plays Amy Dunne as a woman possessed.

Gillian Flynn writes great dialogue. One of my favorites is this bitter exchange between Nick and Amy. Nick tells her, “Yes, I loved you and then all we did was resent each other, try to control each other. We caused each other pain.” She flippantly replies, “That's marriage.” In another scene Flynn sums up the shallow narcissism of the Neil Patrick Harris character in three words. He and Amy are discussing a vacation getaway. “Octopus and Scrabble?” he asks.

Although the lion's share of attention has gone to Pike – and justifiably so. The entire cast is quite good. Ben Affleck (doing his first on screen full monty) is as integral to the picture's success as his leading lady. In fact he has the more difficult role. Whereas Amy is a totally balls out part that allows the actress to really go there, the role of Nick is far more nuanced. He has to alternately act guilty, act not guilty, act like he's trying not to act guilty, and then act like he's not trying to act not guilty. He pulls it off beautifully.

The rest of the cast is equally terrific. I agree with Scott that Carrie Coon and Kim Dickens are good in their roles, but so are Neil Patrick Harris and Tyler Perry. Missi Pyle steals several scenes as the television journalist clearly based on Nancy Grace.

Gone Girl is what it is. A trashy mystery/thriller with memorable characters, quotable dialogue, and a series of red herrings and assorted twists and turns. It may not be a great movie, but it sure as hell is an entertaining one.