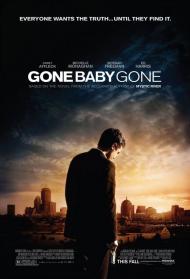 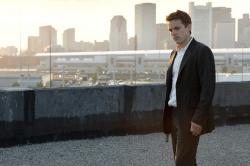 Gone Baby Gone is a very grey movie. The motives are grey, the ending is grey and my feelings toward it are grey. It asks you to decide who makes the correct decisions (if anyone does) throughout the movie. Along with that it left me feeling blah about it. I didn't hate this movie, but I certainly didn't love it. I wasn't bored while watching it, but I wasn't exactly overwhelmingly entertained. I certainly have no desire to ever watch it again.

This being Ben Affleck's directorial debut, I can say that he acquits himself fine as a director. The story is revealed in layers and in flashbacks and he handles it adroitly. It looks good, the actors give fine performances. If he wants to give up acting to work behind the camera, this movie is a good first step in that direction.

Playing the lead in the movie is Ben's lesser-known brother Casey. Best known for being a part of the Ocean's Eleven films, the younger Affleck proves he can act and carry a movie on his own here.

He plays Boston Private Investigator, Patrick Kenzie. After a young girl is kidnapped, he's hired by the family to supplement the police investigation. This mainly involves him using his seedy underworld connections to speak to people who wouldn't speak to the police. His first big discovery is that the kidnapped girl's mother (the very definition of urban white trash) was involved in a drug deal gone wrong, in which a large amount of money went missing. Only that's just the first thread in a very knotty situation. There are many more strings to be pulled before this mystery will be unraveled.

Overall the cast is good. Although it's Amy Ryan who's getting the Oscar buzz, Harris, Freeman, Monaghan and Affleck all turn in solid performances.

There are a few action scenes, but tension (what there is of it) comes from the mystery, rather than physical danger.

I think the main reason I didn't care more about what happened at the end of this movie is that I didn't particularly like any of the main characters all that much. I did want to know the solution to the mystery, but not desperately so.

So overall, a solid movie, but not one that evoked any real enthusiasm from me. 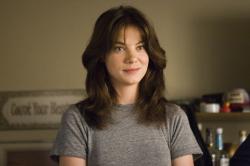 Scott, your review for Gone Baby Gone is like your politics, moderate. You didn't see it one way or the other. The point of this movie is to show both sides of a moral versus lawful decision, and kudos to Ben Affleck for not being biased one way or the other. Scott, did you agree or disagree with the final choice made by Patrick?

If you have not seen this movie then the above paragraph will mean little to you. I do not wish to give the ending away as that is the best moments of the film. You may come away from this film debating it. I think Patrick made the correct one, even though many people, including himself, are hurt by it.

Casey Affleck is the actor to watch in the next couple of years. Because he has not been in the spotlight as much as Ben we have less preconceived ideas about him and thus he can play parts that Ben could not. If Ben had played this role his fame would have distracted from the rest of the plot. Casey is just a cast member and thus the film has a consistency that Ben's presence would have thrown off.

As for Amy Ryan playing the drug addled single mother, I have to say that she does a very convincing job. I have met women that are quite similar to her. They are more common than Hollywood has ever represented in movies. The problem with her performance is that she is almost always on. She is always loud, crass and cussing at something or someone. This makes her a one note character. She needed at least one scene where we could muster some empathy for her, but she remains completely unlikable the entire film. Granted, if we did like her, the end of the film would not be so thought provoking. 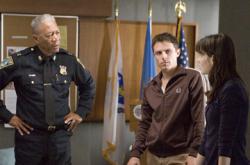 SPOILER ALERT: This movie is all about the decision Patrick makes at the end. Eric you say you agreed with it. I did not. Little Amanda McCready was much better off being raised by Jack Doyle than by her completely unfit mother. Child Protective Services should have done their job and removed her before this situation arose. Yes everyone with workable reproductive parts can become a parent but that doesn’t mean they have the right to destroy their child’s life. I found the ending to be incredibly sad and so unnecessary.

I agree that the direction is first rate. As a writer/actor/director Ben Affleck is a very talented filmmaker. As Scott wrote he slowly unravels the strings to this mystery. As we get closer and closer to the truth we begin to question just who the good guys and who the bad guys are. I agree that it is all very grey right up until the end. I fall on the side of what is best for the child and I don’t give a rat’s ass about this poor excuse of a mother getting her daughter back.

I agree that Casey Affleck gives a solid performance going toe to toe with the likes of Morgan Freeman and Ed Harris. I think Amy Ryan was perfectly cast. I don’t think they should have made her any more sympathetic though. My favorite line of hers, which really sums up her personality and lack of intelligence, occurs when she gets Amanda back and gushes to the media present, “I feel like 911 now!”  Huh!?

Gone Baby Gone is a solidly entertaining urban police drama with a thought-provoking morality-twisting ending. Scott, like Eric I want to know if you agreed or disagreed with Patrick’s choice.