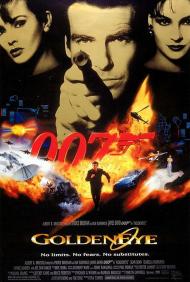 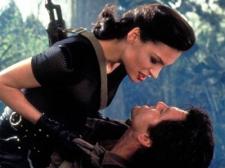 Onatopp lives up to her name.

I have had it told to me and have read many times that Goldeneye is one of the best James Bond movies. It made a ton of money when it came out and Pierce Brosnan is a great Bond. It reveals a little of James’s history as well as introduces the new M. However, the movie is full of the usual Bond cliches as well as starts a new one.

The plot involves James teaming up with a hot Russian computer programmer to stop a rogue agent, 006, from a very elaborate terrorist plot. This movie takes James from Monaco to Russia and his favorite vacation spot, the Carribean. Although this is a new Bond, it still has the same standard Bond cliches. The movie opens with James getting passed on the road by a woman in a sports car. Fast driving women always impress James. He met his wife after he ate her dust in, On Her Majesty’s Secret Service. The bad guy has an overly elaborate complex that blows up at the end. I cannot count the Bond movies that end that way. Bond says several stupid quips. The one about frequent flyer miles is the worst, or maybe it is the one about liking a good squeeze? Goldeneye also starts a new tradition of having someone close to Bond betray him. We would see that plot device again in The World is not Enough, Die Another Day and Casino Royale.

I watched this movie with my 13 year old, who is a huge Bond fan and his favorite is Pierce Brosnan. He got very bored after a half hour. His problem was that Bond has the opening action scene but then he is not featured in another one until half way through the movie, unless you count a 15 second romp with Onatopp, who has orgasms when she kills. The scene with Natalya at the dish should have been cut completely. James sees Onatopp steal the copter, then cut to him at headquarters getting a briefing from Tanner that they found it, by satellite, at a satellite dish station in Russia. Trim the scenes of the Russians yackking and for all that is holy, we should never have to listen to M for more than 10 seconds. She lays into Bond with the line, “If you think for one moment I don't have the balls to send a man out to die, your instincts are dead wrong.” But then as he leaves she turns all motherly and says, “Come back safe.” Women in Bond movies have one purpose and one purpose only!

The last half of the movie is by far the better half. It is pretty much all action. From James driving a tank through Moscow, to the fight on the huge antenna, the pace tries hard to make up for the slow first half.

The flow of the movie for me is a bit off. James goes from having sex with his driving analyst to a casino where Onatopp just happens to be. In Russia he is suddenly in a bath house. In the Carribean he gets a plane from the CIA to fly to Cuba to stop 006. All of a sudden James is sitting on a sun setting beach looking contemplative. I thought maybe he was waiting for the sun to go down before flying into Cuba. But no, he waits until after talking and having sex with Natalya, to fly over the next day. So what if the world is about to fall into financial ruin, James has a beautiful, deserted beach and a hot babe in a bikini. The world can wait. I know I can sure wait before ever watching this movie again. 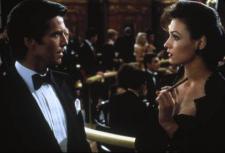 Pierce Brosnan, in his debut, turns in a great performance as 007.

Well obviously since neither Bond nor Natalya knew exactly where the satellite dish was in Cuba and, as you point out Eric, the sun was setting, they were waiting for daylight the next morning so that they would be able to see the dish that they looking for. That's why they waited until the next day.

About the only thing I agree with you on Eric is that, like almost every Bond film ever made, this one runs too long. There are some scenes that could have been trimmed, not to the extent you might want though. However, I actually like Judi Dench's M in this movie. It's only in future installments that she gets annoying to me. In this one they give her and Bond more of an antagonistic relationship. She's an accountant, a bean-counter, while Bond relies on good old fashioned instinct. It actually resembles the relationship between Bond and M in the unofficial Bond movie, Never Say Never Again. Your other complaints seem silly. How many times has an MI6 agent turned traitor? Name another time its happened in the Bond series besides here. You say that having a female villain isn't original. If it had been another male villain, would that have made it more original? And having the villain's lair blow-up is a tradition. It's supposed to blow-up at the end.

Brosnan, in his debut, turns in a great performance as 007. He manages to seem tough while still displaying wit and sophistication. Sure, some of the one-liners he's given to say aren't the best of the series, but they're hardly that bad and there have certainly been worse. He definitely looks the part.

The writers, under the influence of Producer Barbara Broccoli (daughter of the original Bond producer Cubby Broccoli), make some subtle changes to the Bond universe here. M calls Bond a misogynistic dinosaur and Moneypenny playfully reject Bond's come-ons. The books and movies that began as the ultimate male fantasy lost a little something with this movie and have yet to get it back. In the most recent Bond, Quantum of Solace, M has twice the brains of 007, who is reduced to being a blunt instrument with the least amount of dialog of any Bond.

In tone this movie reminded me of Timothy Dalton's The Living Daylights. They both contain a measure of real tension and action, while not completely eliminating the lighter moments of Bond that work. The one-liners, the over-the-top action stunts, the shaken but not stirred martinis (Do you look like the kind of person who gives a damn, Daniel Craig? You're supposed to.) and even a few (but not too many) gadgets. Far from being the dreadful movie you make this out to be Eric, this is probably Brosnan's best outing as Bond. I'm sorry if all that yakking bothered you, but some of us enjoy a little plot and dialog in our movies. 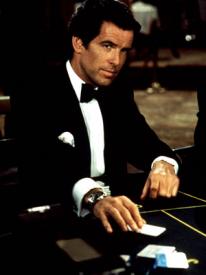 Pierce Brosnan takes over the role of the world’s most suave super spy with ease. From the standard over-the-top opening sequence, where Bond literally dives off a cliff and descends faster than a free falling plane, climbs in the open door and manages to right the aircraft before it crashes, to his ordering of his trademark beverage and classic self-introduction in a casino a few scenes later, he proves to be the best 007 since Sean Connery.

I agree that like nearly all the Bond movies this one runs a bit long. Eric complained about the first half but I was more annoyed by the ending which seems to go pointlessly on and on. We all know Bond is going to complete his mission successfully so why drag it out so much?

The familiar presence of Desmond Llewelyn as Q is comforting and helps bridge the gap between this movie and the previous Bond entry. It had been 6 years and 4 months since the last Bond mission in License to Kill, which to date is the longest Bond free span since 1962. I guess Dench’s M provides the common link in these new movies, since neither Q nor Moneypenny have appeared in the Daniel Craig movies.

Speaking of Craig, I hope his tenure as James Bond is over. Of the six actors that have played the part he is the least suited for it. This is especially glaring since he replaced Pierce Brosnan, who, as he proved in Goldeneye, was a natural for the role and is the only Bond ever to come close to Sean Connery.

At the risk of sounding like a broken record I will repeat what I have been saying for years. The producers need to find a new young actor to play 007 and set the series back during the early 1950s. Bond doesn’t belong in the 21st Century since in my mind he doesn’t surf the internet or own a cell phone and he sure as hell doesn’t have a politically correct mindset about the fairer sex. Please put him back where he belongs and let Bond be Bond.