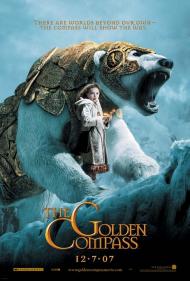 Nicole Kidman and Dakota Blue Richards in The Golden Compass.

The Golden Compass throws lots of information at the audience and jettisons some of the best characters after only a few scenes. The world it presents is both fascinating and allegorical to our own. The controversy about it slamming organized religion is only there if you want to see it. Whereas the book series, written by an admitted atheist, maybe anti-catholic, the movie is merely anti-establishment. The magistrate that represents religion in the book is merely seen in the movie as a political organization that keeps people in line.

Earth in this world is populated by people who have souls that appear as animals, called daemons, that walk beside their human counter part. The magistrate wants to separate children from their daemon. Read into that what you will.

The main character is a little orphan girl who is given a compass which has the uninspired ability to know the truth. I was hoping for some greater ability but it serves the story as this is an atheist’s concept of religion as a deceiving, manipulative body that only serves to control people. Giving a child the power to know the truth makes her powerful.

Daniel Craig is given plenty of screen time in the previews but his actual screen time is extremely minimal. Kidman is hardly the star as well. What is left is a little girl running into talking polar bears, flying witches and a series of humans that help her out. The movie never lets anyone become interesting enough to care for.

The one and only thing the story has is what the author was trying to say in the book. His hatred for religion may have been more evident in the book but here it gets murky. The movie tones it down and what is left is without real impact. We merely have a little girl trying to save her friend. The director should have had the balls to go all out and follow the book. Why have the speculation? The people who love the book will complain that he whimped out and the religious right will complain whether he toned it down or not. He might as well have gone for it and followed the author’s anti-religious theme completely. 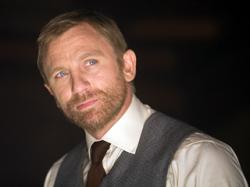 Daniel Craig in The Golden Compass.

I read the Dark Materials Trilogy on the advice of a friend and can't say I enjoyed them very much. The first book in the series, which this movie is based on, doesn't contain anything like the anti-religious statements of the final two books in the series, which at times degenerate into propaganda for the authors personal beliefs. The later books contain the death of God, a homosexual Angel couple, and the Catholic Church condoned assassination of little children. None of which are ideas approved by the church, I would imagine. By comparison, the first book is downright respectful towards religion.

There are some interesting ideas in this movie as there were in the book, they just never really come together into anything consistently entertaining. Iorek, the armored bear, was my favorite character from the book, but he is given a diminished and altered role in the movie. Serafina, the witch, is another interesting character and again her part has been reduced. Some of the concepts from the books are introduced, like Dust, but are never explained, as they aren't in the books until the final one. So like the book, this movie has a bunch of stuff happening, but never gives you a reason to become emotionally invested in any of it.

The best thing I can say about this movie is that it looks good. The effects are well done and the casting is brilliant. I pictured each of the actors as I was reading the books. If only the script was as good as the visuals and the actors.

My final complaint about the movie is that it ends abruptly and about two chapters before the book does. The book has a more dramatic ending, where you learn something about one of the characters that you think of as a good guy. Since there was some question if there would be a sequel, I guess the filmmakers thought this was a better place to stop, and maybe it was, but it certainly changes the ending.

As for the religious complaints, I can watch a movie like Passion of the Christ or a movie like this and not mind. I'm willing to hear out anyone's beliefs who wants to make a movie, but if you're going to make a movie at all, it damn well better be entertaining if you want people to hear you at all. And this one just isn't.

Dakota Blue Richards and a CGI polar bear in The Golden Compass.

I haven't read the books in the series this movie is based on. I therefore have no opinion on the author's intended religious implications. But clearly the producers were trying to capitalize on the success of The Lord of the Rings movies. They even cast Ian McKellen and Christopher Lee (although Ian provides voice work only and Lee utters just one line of dialogue).

Unfortunately The Golden Compass wasn't a big enough hit in the United States to interest New Line Cinema into making the sequels, so the story just sort of ends without a proper conclusion. (it was a much bigger hit around the globe, becoming the first movie to earn over 300 million worldwide while failing to crack 100 million here in the U.S.)

The story is overly complex with so many different characters and groups being introduced in quick succession. Many of them show up for a scene or two before disappearing altogether. Like so many modern fairy tales the story brings together an eclectic group of characters. There are witches, an aeronautical cowboy, a talking armored polar bear and shape-shifting animals, to name just a few of the inhabitants of this colorful world.

Visually The Golden Compass is mesmerizing. The shot of Lyra, in silhouette, riding in slow motion on the polar bear's back across the ice at night is stunning (even if it does look a bit like one of those Coca Cola commercials). As are many other panoramic CGI vistas on display throughout the movie. The actors definitely take a backseat to the effects in this one.

One scene that stood out for me was when Nicole Kidman smacks her monkey daemon across the face. She then picks him up to comfort him and as she turns her head we see her own hand-print on the side of her face. It is a brilliant yet simple way to show that what hurts the daemon also hurts their human.

The Golden Compass, while gorgeous to look at, crams in too much exposition at the expense of good old fashioned storytelling and it has one of the single worst endings of any movie ever.