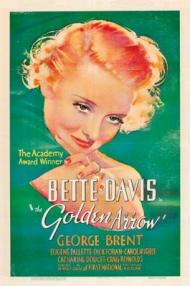 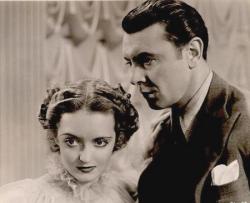 The 1930’s was the high point for the old Hollywood studio system. These dream factories were cinematic assembly lines cranking out product. The Golden Arrow is one such movie from Warner Bros. in 1936. Bette Davis, fresh off her first Oscar win for Dangerous, became so disillusioned by the quality of scripts she was being offered at this time that she jumped ship for England, breaking her contract and eventually winding up in court. She lost the case but made her point and was offered better parts upon her return to the studio.

Watching this movie it is understandable what Davis was complaining about. This is a cliché ridden screwball comedy with a hack script. Davis plays Daisy Appleby, the society darling heiress of the Appleby cosmetic fortune. She meets a newspaper reporter played by her frequent costar George Brent. A screwball comedy with an heiress and a newspaperman; how original. And what comedy from the 30’s would be complete without the ubiquitous Eugene Pallette?

The plot is convoluted to the point of being ridiculous. Daisy is tired of being chased after by titled European fops, trying to get their hands on her purported 12 million dollars. She weds Johnny (Brent) in a marriage of convenience. She gets to be left alone and he will get the chance to finish that great American novel he’s been itching to write. Of course they eventually fall in love. Along the way there is a major plot twist and the final scene is genuinely amusing.

In spite of the bad script there are several things The Golden Arrow has going for it (other than the presence of the always interesting Miss Davis that is).

One is the fabulous outfits created by Orry Kelly. In one scene, where Daisy and Johnny swim in the pool on her yacht, Davis wears a patterned bathing suit with a matching head wrap and cape. Later she wears a cunning little polka-dot number with ruffled lace trim around the neck and shoulders. Carol Hughes, as competing heiress Hortense Burk-Meyers, shows off a stunning all-white fur coat.

Another thing in the movie’s favor is the pacing. Director Alfred E. Green keeps things chugging along. The entire picture takes just over an hour to unreel. They really knew how to edit then before the days of the “artistic lingering shot”. The Golden Arrow lacks pretense and goes down easy, though it will be quickly forgotten.