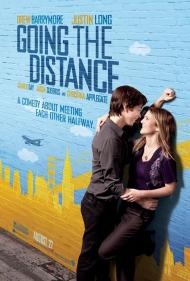 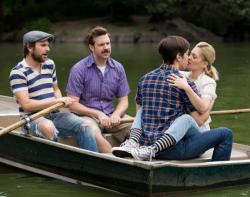 Normally the most important part of any romantic comedy is the chemistry between the two leads.  In this movie though, Long and Barrymore do share a chemistry (helped no doubt by the fact that they were in a real life relationship during filming), but they are upstaged comically by the supporting cast.  So while you still want to see them end up together, some of the funniest scenes in the movie are when they're apart.

Like most rom-coms, the plot is fairly simple.  Erin is an aspiring reporter and Garrett works in the music business.  They meet over a game of centipede in a bar in New York City and end up sleeping together that night.  They agree to keep seeing each other, but with the stipulation that it will be kept casual because Erin is moving back to San Francisco in six weeks.  Naturally they fall in love during that time and instead of just going their separate ways, they decide to try a long distance relationship.  But can they make it work?

Although this is a pretty standard formula romantic comedy, it does differentiate itself slightly by being R-rated.  There is some brief nudity (Long's not Barrymore's) and plenty of sex and adult talk.

Garrett's friends played by Jason Sudeikis (SNL, 30 Rock) and Charlie Day (who is basically playing a gentler version of his character from It's Always Sunny in Philadelphia) seem to have snuck into this movie from a Judd Apatow comedy and steal nearly every scene that they're in, particularly Charlie, who shares Garrett's paperthin walled apartment.

Equally adept as a scene stealer is Christina Applegate as Erin's sister.  Her uptight, germaphobe character is a comedy highlight.  I only wish she'd been in more scenes.

Because the supporting cast is so funny, they demonstrate the movie's biggest weakness.  For the first half of the movie while Garrett and Erin get to know each other, they hold our attention and are cute together.  During the second half though, while they try to deal with being apart, they become kind of boring.  We know how it's all going to end so there's no real need to drag it out.  It's during this half that the supporting cast really stands out.

In some ways the film feels as though it has a split-personality disorder.  It's trying to be romantic, but also funny in that The Hangover kind of a way.  I suppose that's supposed to mean that it will be romantic for the ladies, but the guys will also think it's hilarious.  Of course, what that really means is that by trying to be both, it's never quite as romantic or as funny as it could have been.

Thanks to a likable couple in the lead roles and a great supporting cast, this is an enjoyable movie, but it's good instead of great. 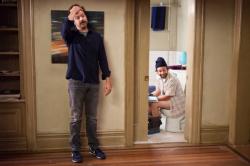 Barrymore and Long are good together but I never bought their characters.  Garrett bitches about having to look into working with a boy band, instead of a group he deems talented, yet Garrett is trying his best to look like a member of a boy band.  He clearly works out and shaves his entire body.  You can tell when he goes to the spray on tanners.  I do not care how many plaid shirts he wears, Garrett is still a metrosexual.

Erin is as comfortable hanging out with guys as she is with girls.  She has the top three scores on Centipede and is not shocked by anything, such as when Garrett's room mate listens to them have sex.  Everything one does, the other finds endearing.  That is all very sweet, but neither is ever shown having the slightest flaw.

They are cute together but frictionless.  Having Erin be embarrassed by Garrett's room mate or Garrett coming out of the boy band closet could have served the story.  It would have added something to the characters and some laughs to the script.  My favorite scene in the entire film was when Box makes fun of Garrett's innocuous texting.

As Scott wrote, the writer, Geoff LaTulippe, filled the script with adult sexual conversations and lots of swearing.  That is all fine and dandy, but curse words in and of themselves do not make clever dialogue.   In one intended funny scene Erin gets drunk in a bar and starts cursing her head off at some muscle head.  In another scene Garrett meets a male friend of Erin's, who is close to his mother and Garrett makes a comment about being grateful for his mothers vagina. Erin describes her relationship to her sister as, "We're not trying to choke each other with commitment. But now you're fucking freaking me out and I can't do anything but picture him humping some fucking bartender."  Using the word "fucking" may make the rating go up but it does not guarantee a laugh.

Drew Barrymore and Justin Long in Going the Distance.

Today’s romantic comedies have raised the bar in terms of sex/nudity and crude bathroom humor. Going the Distance and Love and Other Drugs are two examples of the brave new world of the rom/com.  A generation ago When Harry Met Sally created a stir with Meg Ryan’s public fake orgasm scene. Now we have Justin Long and Drew Barrymore having sex on a dining room table where (it turns out) her character’s brother-in-law is eating dinner. And, as Eric commented, the liberal use of the word “fuck” seems like overkill.

No offense to Justin Long but he is no leading man. Don’t get me wrong I find him funny and talented (and attractive in a quirky sort of way) when playing comedic supporting roles (he stole every scene he had in Galaxy Quest) but he’s out of his element playing the romantic lead. He does share a believable chemistry with Barrymore and many of their early scenes together feel improvised. My guess is that Erin and Garrett have similar personalities to the real life Drew and Justin.

Scott is right about what’s wrong with the movie. The central characters just aren’t funny enough and their story lacks any real tension. Any comedy where the supporting cast steals all the scenes is in trouble. The most unexpected aspect about Going the Distance is in just how rarely the unexpected occurs.

Eric, it didn’t bother me that Erin is comfortable being one of the guys. In fact I think Barrymore’s funniest scene is the one you mentioned where Garrett’s roommate deejays their hook-up from the next room. She at first pretends to be offended but then tells Garrett she really doesn’t give a shit, she just didn’t want him to think she was a slut.

Going the Distance is mildly funny and features an adorably sweet central couple. What it needed was a sharper script with a bit more bite and more tension than just the fact that they spend time living on opposite coasts…