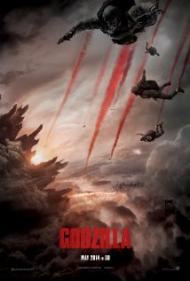 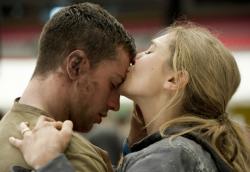 The makers of this latest Godzilla film seem so determined to take their subject seriously that they manage to suck almost all of the fun out of it. Instead of a monster movie with a bit of human drama to give it perspective, it feels more like a bad soap opera with a little bit of monster action thrown in here and there. Godzilla might be the name in the title, but he's sure not the star of this film.

The other person who's not the star, is Bryan Cranston. Hot off the success of Breaking Bad, he's been featured heavily in the trailers and when the film starts it does seem as though he will be its star. He's a nuclear scientist working in Japan whose wife is killed in a horrendous accident at a nuclear plant. Haunted by that day, he spends the next 15 years trying to prove that it was no accident and something caused the catastrophe. After this jump to the present day however, Aaron Taylor-Johnson (Kick-Ass), who plays Cranston's son Ford, takes over the lead role as a young soldier and family man. But then we also have Ken Watanabe and Sally Hawkins as a pair of scientists, Elizabeth Olsen as Ford's wife, and David Strathairn as an Admiral, all of whom get at least as much, if not more, screentime than the giant lizard, despite almost none of them having much personality or depth.

Godzilla himself doesn't get to make his entrance into the film until nearly the half-way point and even then we catch only glimpses of him. He emerges when it turns out that what destroyed that Japanese nuclear reactor was a giant insect creature that lives off of radiation. It was awoken 15 years ago when a mining company broke into its lair where it had lain dormant for millennia. Godzilla it seems, is this creature's natural enemy and is there to restore the balance by killing it and its mate who has also awoken.

There's the potential for some excitement, but the filmmakers seem determined to keep it as dull as possible. When after an hour into the movie we actually get to see the full Godzilla and he is about to engage in combat with the bug creature in Honolulu, the scene cuts away to Elizabeth Olsen's character and we only get to see a glimpse of the fight on a newscast. We are teased in this manner until the film's final 20 minutes where we finally get to see some true monster-on-monster action. For about 10 minutes or so the film lives up to its billing, especially when Godzilla makes use of his fire breath. He and the two monsters trample their way through San Francisco, causing mayhem and destruction, although it's all very bloodless and gore free. This final fight manages to produce the film's only stand up and cheer moment when Godzilla really lets loose with his power, but by then it's far too little, too late.

The hour and half that leads up to this final battle is filled with too many poorly written scenes of stiff actors spouting wooden dialogue that wouldn't make it into a daytime soap. Apart from Ford, we learn almost nothing about any of the other characters and it's therefore very difficult to feel much for them, despite the cast being filled with recognizable faces.

Visually the movie is fine rather than exceptional. The CGI is rather generic and mostly unexciting. Some purists have complained that Godzilla looks too fat, but he is suitably impressive without being truly wow-inducing. Still, we've come along way from the man in a rubber monster suit, smashing models, of the original films.

I can understand the filmmakers wanting to make a serious movie. With the idea of giant monsters behind it, it's very easy for this sort of movie to become campy. There's taking a movie seriously however and there's taking it so seriously that you suck all the fun out of it. I'm not asking for a comedy, but a little more sense of joy wouldn't have gone amiss. To go as seriously as this one does would require a far superior script than they managed here. 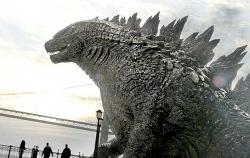 Director Gareth Edwards was reportedly inspired by Jaws, in the sense that it takes a while before the audience sees the monster. But in that movie the shark still gets more screentime than Godzilla does here. This had the potential for being a great horror movie. The look and sound of the giant lizard are done well. Visually this is by far the best of any Godzilla movie. If only they had focused more of the story on him instead of making him a guest star in his own movie.

I think the cast does fine work, I wouldn't call their acting stiff. The script is the problem. It strays too often from the carnage and mayhem, and I do agree with Scott that it contains dialogue that would sound at home on a daytime serial. People don't go to Godzilla movies for character development or dramatic emotional moments. Just bring on the king of monsters and let him battle it out to the death with the giant bugs.

Too much time is spent away from the action with characters we don't care about. The wife played by Elizabeth Olsen adds nothing to the movie. They should have jettisoned her scenes as well as the scenes with the young son. I really wanted to like this movie. Godzilla is one of the all time great movie monsters and he deserves a movie that lets him fulfill his screen potential. This isn't it.

There are a few tidbits for diehard fans. In the world in this movie the Godzilla monster was first spotted by scientists in 1954, which was of course the year the first Godzilla movie came out. And two of Godzilla's most famous opponents are hinted at. Both Mothra and Rodan make cameo appearances in a classroom scene early in the movie. The young Ford is shown in school in Japan studying the life cycle of moths. A moth that looks suspiciously similar to Mothra is shown as is a miniature version of a red pteranodon that looks like Rodan. Even though I was disappointed by this movie, I still hope they make a sequel that includes one of these classic monster villains. With a better script, faster pacing, and much more Godzilla this could still become a great movie franchise.

This is not your grandfather’s Godzilla movie. Scott complained that the film makers sucked almost all the fun out of it. Although the campy fun from some of the earlier versions is not present, we do have a decent action film. The reason Godzilla looks fat is because he is based on the original 1954 design.

Sure, Godzilla is more of a teasing presence than the star, but come on, it is a giant lizard. How much emoting can we get from him? We need real human characters to lead us through this destruction adventure. Patrick wanted more monster screen time, but two hours of CGI battling monsters would be a bore. Do we really care what happens to these monsters? Thousands of people die because of them.

Created in Japan, Godzilla was originally a metaphor for nuclear bombs. This movie follows suit as the monsters feed off radiation and eat nuclear weapons like candy bars before leveling cities. There is even a scene where the Japanese scientist shows the American Admiral a watch given to him that survived the nuclear bombing of Hiroshima in 1945. This film even references the actual nuclear weapons test in the Bikini Atoll in 1954. Only here they say it was not a test but an attempt to kill Godzilla.

This film is obviously trying hard to relate to many current people who have loved ones in military uniform. Lieutenant Ford gets home from a 14 month deployment and before he even has time to make love to his wife, he has to fly over seas to get his father out of jail. I was not bothered by the brief scenes of his wife and child worrying about his safety and he worrying about theirs. We need to care about someone in this film or all we have left are these monsters destroying buildings and killing thousands of unknown people.

My biggest complaint has nothing to do with the lack of Godzilla’s screen time. I laughed every time soldiers were shown “sneaking” up on one of the monsters carrying their rifles, whose bullets have no effect whatsoever on the monsters. These men sneaking up on Godzilla is like an ant sneaking up on a human. They could walk right up to them, yelling and waving flags, without ever being noticed.

As an allegory, Godzilla is portrayed as a deterrent. Like one country having nuclear weapons to keep another country from using theirs, so goes Godzilla. His presence is all that stands between the destruction of mankind and the other monsters. Yet, like an atom bomb, people will die whether it is used in the name of evil or self-defense. Godzilla destroys as much and kills as many people as the other monsters. Humans may be scared by Godzilla, and nuclear power, but at least we know there is something out there that may stop the monsters of the world.