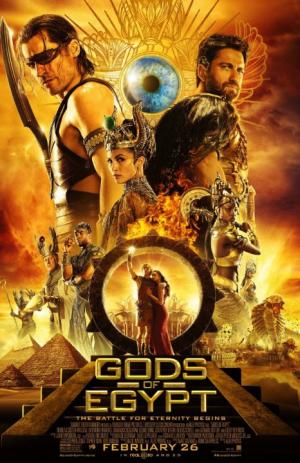 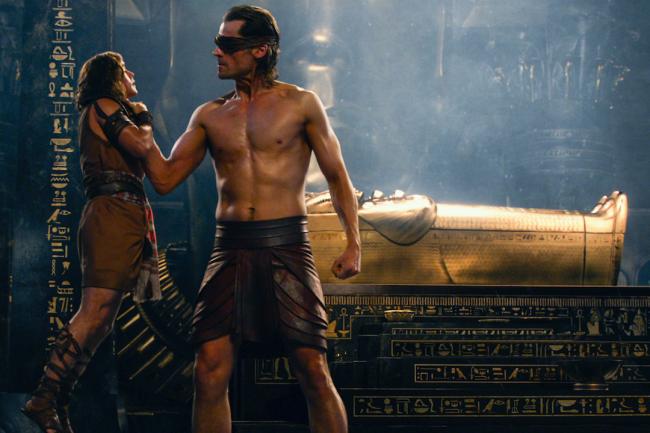 Brenton Thwaites and Nikolaj Coster-Waldau in The Gods of Egypt

Ever since I was a child and saw The Ten Commandments (1956) on television, I have been fascinated by ancient Egypt, not that Cecil B. DeMille made a historically accurate film mind you. Then I played and enjoyed Dungeons and Dragons for years, where mythological Gods could be characters within the game. In other words, Gods of Egypt was an easy sell on me.

At the coronation of Horus, the winged God of the air, by his father Osiris, Set, the god of darkness and Horus's uncle, shows up, kills Osiris before the crown can be properly passed and pulls out Horus's eyeballs. Set takes over all of Egypt, kills other Gods and enslaves the mortal citizens. Meanwhile, a young love-struck thief, Bek (Brenton Thwaites), who acts like Douglas Fairbanks in The Thief of Bagdad (1924) or for a more recent reference, Aladdin, will do anything to impress his lady love, Zaya.

This includes sneaking into Set's treasury to retrieve and give back to Horace one of his eyes. As Zaya says to Bek, "Set has taken over Egypt, and has enslaved its people. Only one god can save us, but not without his eyes." Bek responds flirtatiously, "Steal from a god? Only a madman would try such a thing." Zaya smiles back at him knowingly, "Where do you think we could find someone so mad?" They make a cute young couple.

The rest of the film involves Horus and Bek teaming up to find his other eye and defeat Set. Bek knows how to get into Set's pyramid and will do so if Horus will save Zaya, who has gone where no one ever returns. This takes the God and the mortal all over Egypt and even into the stars where they meet Ra and witness him defeat a giant snake that attacks the Earth on a daily basis.

The entire film is a CGI extravaganza. The Gods are all taller than the mortals, like the humans and the Hobbits in The Lord of the Rings trilogy. All scenes were filmed in Australia, with the desert outback standing in for Egypt. Also in the cast are actors from all over the world, except of course Egypt. Gerard Butler doesn't even bother to try and hide his Scottish accent. The movie setting depicted is a science fiction version of ancient Egypt, where the Gods ruled and the ancient architecture is exaggerated to fantasy levels.

There is plenty of superhero type action and computer generated animation on screen to keep your eyes busy. Your mind however, may get bored as this is pretty predictable stuff. If you can leave your mind at the door and let your imagination run loose, you may find yourself enjoying this film. If you're expecting something at all deep you will be sorely disappointed. 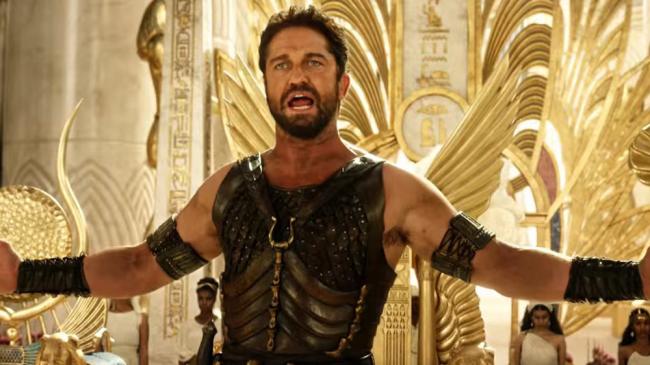 Gerard Butler as Set in The Gods of Egypt.

Although I've never been as fascinated by ancient Egypt as Eric, that hardly matters with this movie since apart from the names of the gods and some familiar imagery, such as the pyramids and the sphinx, this movie doesn't really have much to do with Egypt. It wasn't even filmed there. Instead it was shot in Australia, but honestly, with all of the CGI and green screen work, they could have shot it in the Arctic and it wouldn't have made much difference.

Given the poor critical and box office reception, the best I was hoping for was some campy fun, but this movie is cheesy rather than campy and not much fun. Director Alex Proyas, who directed the cult classic Dark City, directs this one like an epic, treating the preposterous situations with complete seriousness. However, when the movie is basically about superhero gods living in a very Hollywoodized version of ancient Egypt, it's difficult to take it with the intended seriousness.

The only thing about this movie that generated press was the apology the filmmakers made months before it was even released, for not casting Egyptians in a film about Egyptians. Personally, it didn't bother me so much that the gods weren't Egyptian, since whose to say what nationality the gods would be. And there are actors of different nationalities playing the gods, although of course Hollywood casts the ruling family as being all white (but with surprisingly different accents). More noticeable is the casting of the mortals, especially English Rufus Sewell and blonde haired Australian Brenton Thwaites. In the end though, the miscasting is the least of this movie's problems.

Eric called the film a "CGI extravaganza", and in fact, at times so much of what is on the screen is so clearly computer generated that it borders on being a cartoon. Once the gods transform into their flying, metal, shapes and start fighting in a storm filled sky, over a computer generated landscape, it's difficult to see anything real on the screen at all.

Sometimes, as Eric also noted, the film is enjoyable, but only if you don't expect too much. The cast is game and likable, despite the miscasting, and the action, although repetitive, can be entertaining, at least for a little while. I was, however, ready for the film to be over, long before the credits rolled.

An overly optimistic Proyas spoke of wanting to direct sequels in interviews while promoting the film. That's a prospect that seems, thankfully, highly unlikely.