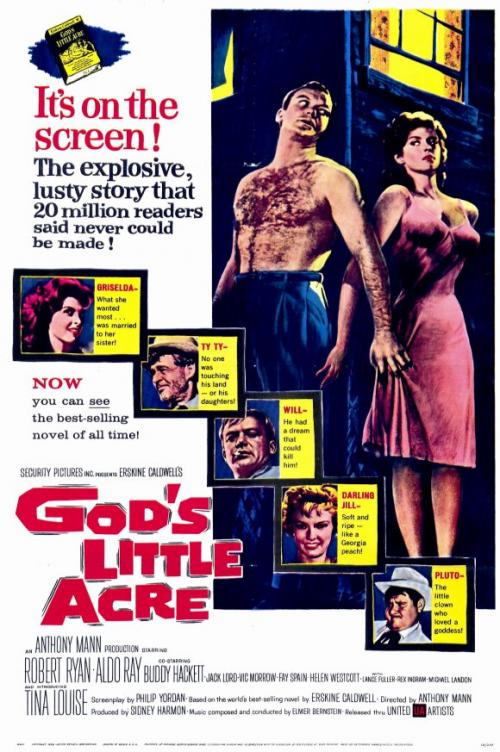 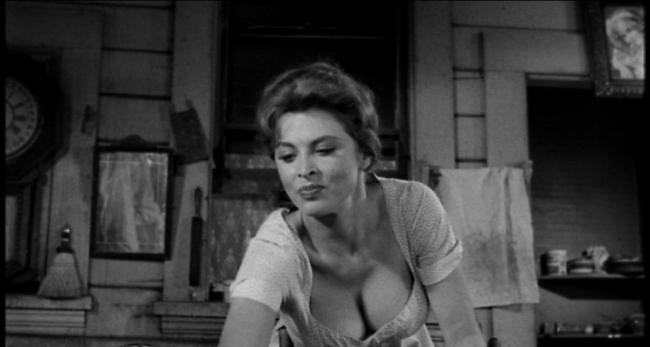 "God's Little Acre," by Erskine Caldwell, was first published in 1933 and stirred controversy for its sexual themes. It was banned in some places and the author even found himself in court defending his work. The movie toned down and eliminated some of the sex but it was still met with some objections to the implications of sex.

The novel of "God's Little Acre" takes place in the great depression while the film never specifies an exact time. Robert Ryan plays Ty Ty Walden, a rural Georgia father of three grown sons and two grown daughters. As the movie begins, Walden and two of his sons are digging a large hole that all three can fit in. He has not grown crops on his farm in years as he has instead been digging holes all over it looking for a buried treasure he believes was put there by his grandfather. He avoids digging in one acre of his property with a cross on it, saying it is preserved as God’s little acre.

Sex quickly appears in the form of Walden’s hot daughter-in-law, played by Tina Louise in her film debut. She walks up to the hole the men are digging in with a pitcher of water. She is wearing a low cut dress and a skirt you can see through. She has a habit of bending over so all the men, and the director’s camera, can look down her shirt. Her husband, played by Jack Lord, is angry with her thinking she is still in love with her old boyfriend who is currently married to his sister. They argue continuously.

Then we meet Walden’s daughter Darlin’ Jill, played by Fay Spain. We first see her naked in an outdoor bath tub teasing Buddy Hackett. She directs him to close his eyes and walk up to her. She then tells him to pump the water into the tub. Of course he peeks. He is in love with her while later she tells him, with all honesty, that he is not attractive to her except for the fact that he may become the sheriff.

Walden gets the idea to abduct an albino, played by Michael Landon, as he has been told that an albino can use a divining rod to find the gold. He takes one hostage and forces him to use a rod. It ends up pointing to a place on God’s little acre. Walden decides to designate another acre for God and dig where the albino pointed to. While Walden and his sons begin to dig, the flirtatious Darlin’ Jill and the albino run off for some hanky panky.

The story has some humorous moments, such as the assumption that an albino somehow has the innate ability to find the buried gold. There is a political subplot about a closed mill. There is also the symbolism of man changing his religious commitment to suit his own needs. However, all of those themes take a backseat to the sexual goings on. Even though this was made in 1958, you know that when Aldo Ray tells Fay Spain that she is a fat peach ready to be plucked, he means something else entirely.