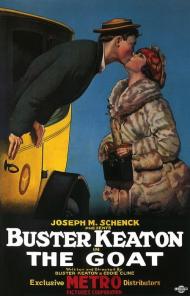 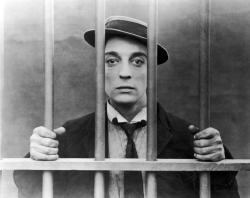 Buster Keaton in The Goat

It seems that one of the oldest silent film gags is to be chased by the police.  In The Goat, Buster Keaton spends most of it's, just under a half hour, running time, evading the law.  It is not much of a plot, but it is fun watching Keaton burn up the energy.

After missing out on some bread in the bread line, Keaton walks by the window of a jail where a criminal named Dead Shot Dan is about to get his mug shot taken.  Keaton looks into the window, through the bars to see what is going on and ends up getting his picture taken as if he were in jail.

The picture goes into the papers and everyone thinks he is Dead Shot Dan escaped from prison.  Wanted posters go up and even after he travels to a different town, folks still think he is an outlaw.  Keaton meets and falls for  Virginia.  They go  to her home, but it turns out that her father is the police chief.

This is the quintessential silent film short comedy.  It is fast paced and involves lots of running about.  Keaton cast his real life family members in small roles, while Virginia Fox and Joe Roberts were likewise regulars in his films.  Keaton had a thing for trains.  This short features a scene where he rides on the front of a train while it gets closer to the camera.  He must have had the time of his life making The Goat. 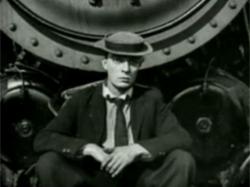 Buster Keaton rides the front of a locomotive in The Goat.

This is classic Keaton at his most unlucky and forlorn. The sight gags come fast and furious and his physical comedy is nothing short of astounding. I laughed when he was waiting in the line behind two mannequins thinking they were real men. His eluding of the police at the beginning is quite creative.

His best bit of slapstick comes when he realizes that the girl’s father is the police chief. They are faced off across a table from each other. Suddenly Keaton springs onto the table, steps on Joe Roberts' shoulders and dives through the small window over the door. It is a breathtaking stunt that he makes look effortless.

As with all silent movies the clothing styles, automobiles and storefronts offer fascinating glimpses through a magic window into the past. It has been nearly a century since this movie was made and the world has changed immensely.

The camera work is very nicely done. The shot Eric mentioned is especially good. From a distance we see an approaching train. It is heading straight towards the camera. As it gets closer we see that Keaton is riding on the front of it. It is a very cool shot.

It’s a toss up over who did the greater chase scenes between Buster Keaton and Harold Lloyd. Chaplin did them too but not as elaborately as Keaton and Lloyd. I wish that Buster and Harold had made a movie together. Wouldn’t that have been amazing? 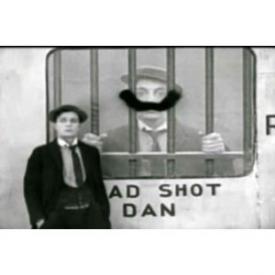 Buster Keaton in The Goat.

I was less impressed than either of you with this short. To me it felt as though Keaton was off his game with this one. As you said Eric, it's really just an extended chase scene. It has its moments, as all Keaton shorts do, but there's nothing spectacular about this one.

The joke you mention Patrick, with the two mannequins, made me laugh, but then he milks it for too long. I do agree that the bit where he leaps over the police chief and out the little window above the door is classic Keaton. The real beauty of his stunts is that he makes it all look so effortless, from the tiniest move to the toughest stunt. Even just looking over the fence, as he does here, takes on an athletic twist. He just glides from one move to the next, but he must have been bruised and battered by the time he was finished filming one of these things.

Also like you Patrick, I found the glimpses into the time period to be as fascinating as always. Almost the entire film is shot on location, with just a couple of indoor scenes and it provides an unparalleled look into the time. It makes you wish someone would retrace his steps in the film to show how much the area has changed.

I also agree that the shot of Keaton on the front of the train is iconic and I recognized it so I must have seen it used somewhere before. While that shot is memorable, I didn't think the rest of this short really was.