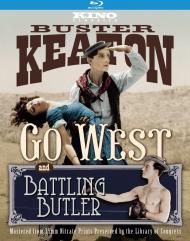 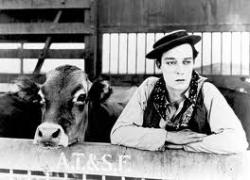 Go West is a unique Keaton film, even if it is not his most enjoyable.  He plays a friendless young man who decides to get out of his small hometown.  He brings his entire belongings to a pawn shop where he sells it all for $1.65.  He makes a brief trip to New York, but is overwhelmed by the crowds, so he decides to jump a train and go west.  After hiding in a barrel, he rolls off the train, ending up near a ranch.

He gets a job as a cowboy.   He soon learns his way around the ranch, even though he does not make friends with any of the other cowboys.  In one notable scene, he plays poker with two other ranch hands and Friendless accuses one of them of cheating.  The guy pulls a gun and tells the great stone face to, "Smile when you say that!"  The camera then turns to Keaton where you wait to see if it will actually happen.

His only friend is a cow named Brown Eyes.  He saves her from being branded, and tries to guard her from coyotes.  She saves him from a charging bull.  It is definitely an original relationship, providing the film's best punch line at the end of the movie.

The main body of Go West is just Keaton clowning around the ranch.  The film hits its stride when the ranch owner sends 1,000 head of cattle on a train to the slaughterhouses in Los Angeles.  His neighbor hires some guns to attack the train.  During the shootout, Friendless is in a cattle car with Brown Eyes and ends up being the only person on the entire moving train.  The film climaxes with Keaton and the cows roaming the streets of Los Angeles.

Go West is not Keaton's funniest film.  It does not contain any outrageous stunts.  It is notable for the cast.  Keaton often used his father in small roles and does so here.  More interesting is Fatty Arbuckle in a small role in drag.   The once leading comedian could not find work after being accused of rape 4 years earlier, and was not given credit for his cameo.

As Eric suggests, Go West is really the story of a boy and his cow.  Friendless and Brown Eyes share adventures and save each others' lives. The cow they chose had quite large expressive eyes and for a cow is actually rather cute. Also as Eric said, the final joke involves this bovine animal. Keaton has better chemistry with her than with his human costar Kathleen Myers who comes across as rather dull.

The scene where Keaton plays poker and is commanded to smile is quite funny. He mimics Lillian Gish in Broken Blossoms by using his fingers to manually force a smile onto his famous stone face (see photo). Audiences of the day would certainly have gotten the reference even if many modern viewers do not.

It was kind of Buster to give his old pal a job. Roscoe Arbuckle was still so notorious in Hollywood that his image was only used for the long shots in the department store. The close-ups were actually actress Babe London (also uncredited). At least he got a day's pay or so. What a difference a few years made. In 1917 Arbuckle was the star and Keaton the unknown comic looking for his big break.

As my brother said, the climax is an elaborate sequence with cattle running through the streets of Los Angeles. When they first get off at the train station in Pasadena you can tell they are actually on the public streets. As the gag extends though it is clear that much of it was filmed on MGM's backlot. Half a century later this idea would be copied in the Barbra Streisand comedy For Pete's Sake, only that time it was the streets of Brooklyn through which a herd of cattle roam with Babs in tow.

One thing I have always found amusing about silent movies set out west is the anachronistic mix of time periods. The scenes at the ranch seem to be set in the 1880s while the scenes in New York and Los Angeles are clearly from the 1920s. Oh and this is yet another Buster Keaton picture that features trains in several scenes.

I agree with Eric. This isn't Buster Keaton's funniest movie but like virtually all his silent comedies it is entertaining and has moments of pure brilliance. 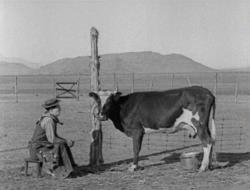 Go West doesn't contain any of Keaton's trademark outrageous stunts, but that doesn't mean it's without jokes or charm. As always with a Keaton film, there is plenty to make you laugh and put a smile on your face.

Although Keaton is known for his great stone face, he was still able to create sympathetic characters. This depth of character that allows audiences to empathize with him is what really sets Keaton's solo work apart from the films he made with Arbuckle. Those early shorts are played strictly for laughs and very often Arbuckle played the character who started on top and finished the film on top, while Keaton knew it was better to play the underdog. And of all the characters I've seen him play, this one, named as Friendless in the credits, might be the most sympathetic. He's an underdog on level with Chaplin's Tramp, only without the maudlin sentimentality.

Keaton very rarely changed his facial expression, but you always know what he's feeling at any given moment. It just goes to show the importance of body language. When Keaton is down, you know it. When a rare something good happens to him, you know it. And when he gets a brainstorm to try something (which will almost inevitably fail), you know he has an idea. He wasn't just an acrobat. He was an actor who worked with his whole body.

The real secret to Keaton's charm is that his character never gives up no matter what goes wrong. Here Keaton is broke and a drifter, but he perseveres. He gets a job on the ranch despite knowing nothing about animals or ranching. Every time something goes wrong, he just keeps going and tries again. When Brown Eyes the cow is being taken to the slaughterhouse, he's willing to try anything and everything to save her life.

Despite the absence of a death defying stunt, there are still several very funny sight gags. Keaton sitting on the stool, waiting for the cow to start giving milk is one of the film's most indelible images. As is the sight of Keaton in a devil's costume running down the street being chased by a herd of cows.

The filming itself was not without its problems. Keaton insisted on shooting on location about 60 miles outside of Kingman Arizona. During production the temperatures approached 120 degrees and the cameras had to be kept packed in ice. Further complicating matters was the fact that Keaton's cow co-star went into heat and production was delayed by two weeks. Unfortunately, the location shooting and the delay increased the cost of the film to such a degree that despite being a box office hit, profits were much reduced.

Keaton himself didn't rate the finished product very highly, saying about the film in retrospect, "Some parts I liked, but as a picture, in general, I didn't care for it." He, like Eric, was being too harsh. It's not his greatest film, but it is enjoyable and funny, nonetheless.