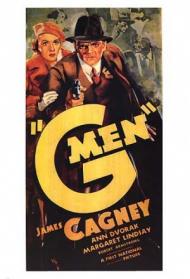 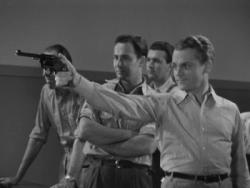 Cagney finally got to be on the side of the law in this movie. It was his first serious gangster picture since Public Enemy. There's plenty of action of the car-chase, machine-gun blasting variety; the only difference is that the story is told from the side of the law. Brick Davis is an honest lawyer from the streets of New York. He was sent to law school by a big-shot racketeer, but joins the FBI to avenge the murder of his best friend. He winds up battling the former henchman of his benefactor. Along the way there's a dame or two. The climax at the hunting lodge is intense.

Although it's more of an ensemble than most of Cagney's movies it still has him playing his stock-in-trade, cock of the walk. True to form he manages to punch a guy's lights out within the first 5 minutes. And he gets to utter snappy wisecracks like when his boss points at a circle on a map and says the gangsters are somewhere within it, Cagney retorts with, "Only 6 states, we've got them cornered." When Brick first enters the academy for training, the agent assigned to teach him assumes that since he was a lawyer he must also be some kind of cowardly bookworm. Brick then proceeds to impress him with his left hook, demonstrates his incredible marksmanship and helps to identify the fingerprints of a gangster. Like I said typical Cagney.

Ann Dvorak and Margaret Lindsay do the best they can in this man's movie. It's interesting to note that they were both household names in the 1930's and 40's, but not many people know them today. They were attractive women and they could both act. What they didn't possess was true star quality. It makes you wonder which famous actors of today will be remembered 50 or 100 years from now and which ones will be known only to movie historians.

This movie is about the early days of the FBI, back when agents didn't have jurisdiction to cross state lines and weren't even allowed to carry guns. It was reissued in 1949, with an added introduction, to mark the 25th anniversary of the agency, which by then had become world famous. In 1935, just 6 years after the FBI was created, this movie played a pivotal role in making federal agents both famous and cool. James Cagney was one of the original movie MIBs. 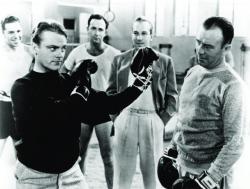 After the Hayes Code went into effect, it became harder for Hollywood to make movies from the gangster's point of view. The code demanded that any lawbreaker get his comeuppance by the film's end and limited the sex, violence and even the type of weapon criminals could use. Although Cagney would later return to playing gangsters in films such as Angels with Dirty Faces and White Heat, Warner Bros. worked around the Code with this film, by casting Cagney against type, as one of the good guys. He's still playing his normal charismatic, strutting rooster, tough guy, but this time when he fires his gun, he's doing it in the name of law and order. Warner Bros. promoted the film with the tagline, "Hollywood's Most Famous Bad Man Joins the G-Men and Halts the March of Crime!"

In truth, this switch from one side of the law to the other does little to diminish Cagney's charm As Patrick wrote, this is still typical Cagney. He still throws right hooks and wisecracks as well as he ever did. And he still retains that cocky Cagney charisma that more than made up for the fact that he lacked typical leading man good looks. There is a bit of an ensemble feel to the film, but there's never any question as to who is the star. Cagney dominates the film as he so often did. By the film's end he is every guy's best friend, the best agent the FBI has, and has made two different women fall in love with him. He doesn't just beat the gangsters literally, he also makes them look dull by comparison.

There are several gunfights throughout the film and two of them are based on real events. The scene in which the gangsters rescue one of their own and kill several policemen in the process, is based upon the "Kansas City Massacre" when Frank "Jelly" Nash was being transported by police and the FBI. It was this event that caused the government to reassess the FBI and granted them broader powers. The other gunfight based on an actual event is the scene at the hunting lodge, which was based on a gun battle between the FBI and a group of mobsters that included John Dillinger and Baby Face Nelson. The intensity of these scenes was aided by the fact that live ammo was used in the guns! Cagney reportedly went along with it, but it scared him enough that he swore it would be the last time he ever allowed himself to be filmed with real bullets flying past him.

As Patrick wrote, neither of the two female leads are particularly well known today. I wouldn't have been able to name them before watching this movie. They both do fine work, but despite the fact that one is supposedly playing the "good girl" and the other the "bad girl", it's almost impossible to see a difference between them. The Hayes Code was harder on women than it was on men and so "bad girls" were no longer allowed to be too bad. Anne Dvorak, the gangster's moll here, plays a dancer in a club who actually marries one of the gangsters before doing the noble thing, where only a few years before she surely would have been simply a loose woman or prostitute who shacked up with, but never married, one of the gangsters. Dvorak is much more of a lady than someone like Jean Harlow would have played it prior to the code.

Although the action scenes are intense and well filmed, they are overshadowed by the star power of Cagney. He's the real reason to watch this movie. It didn't matter whether he was fighting against the law or for it so long as he was still playing the same swaggering tough guy. It was true in 1935, where this became one of the biggest hits of the year, and it's still just as true to audiences of today. 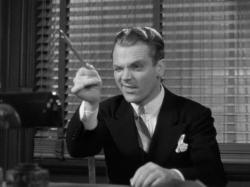 The great James Cagney in G-Men

James Cagney had a unique star quality. He was on the short side and did not exactly have matinee idol good looks but he made up for what genetics did not give him with mannerisms that drew you to him. All 5’ 6” of him was attitude and energy. He was a natural fit in gangster pictures, and as my brothers noted, his charm translated on either side of the law. Note how he is filmed when in scenes with other men. Often he is in the background or the camera is from below, looking up. Both have the effect of lessoning his lack of height compared to the other actors.

My brothers mentioned the action and there is plenty. The shootout in the country home is particularly good but the lack of blood is noticeable. Hundreds of bullets get shot into that home occupied by at least a dozen people but the casualties seem very minimal. The only time someone seems to die is when they run for it and stop to turn and shoot at the G-Men.

Another aspect of the film that stood out for me was the music. There are several musical performances at a night club. Harry Warren wrote most of the songs, including one that I recognized, "Lullabye of Broadway". Warren was quite a prolific songwriter and wrote many songs for Warner Bros. including the classics, "You're Getting to be a Habit with Me", "I Only Have Eyes for You", "Forty Second Street", "The More I See You” and the song Glenn Miller became associated with, "Chattanooga Choo-Choo".

This movie has plenty going for it. It is historical and entertaining. Most of all though, it has James Cagney, who inch for inch had more star quality packed into his diminutive stature than most taller stars. G-Men is a fun watch from start to finish, punctuated by Cagney’s kinetic performance.