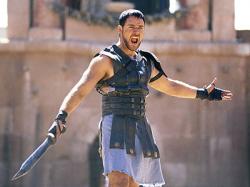 Russell Crowe as Maximus in Gladiator.

Amazing sets, incredible special effects, big names even in the small parts, and beautifully choreographed, over the top fight scenes. What else could it be but the start of the Summer Movie Season! And this is definitely a Summer Movie.

Gladiator is a movie that while watching, you can enjoy; for a while. The action moves fast enough, the visuals are amazing, and Russell Crowe, as the brooding General, does command your attention. As an action movie, it succeeds, sort of.

The problem with this movie though, is that for all of its grandeur, that is all that is; an action movie, and not a very good one. Between the fight scenes it attempts to have a plot, but it's pretty standard -- and considering the subject matter -- very tame stuff.

The plot, what there is of one, merely consists of Russell Crowe seeking revenge for the death of his wife and son. Wow, that's never been done before. The person who he is seeking revenge against is (shock, gasp!) the Emperor of Rome.

Now as a gladiator, imprisoned in chains, you wouldn't think he would have much chance of ever getting his revenge, but wait this is Hollywood. The Emperor, with all of the power of Rome behind him, will enter the Gladiator Ring and face his mortal enemy in combat. An Emperor whose bravest act up until this point in the film is to smother his aged, diseased father.

Of course he does try to rig the fight in his favor, but why get in the ring in the first place? Does he somehow fail to realize that Russell Crowe's only goal is to see him dead? Wasn't he watching the movie? 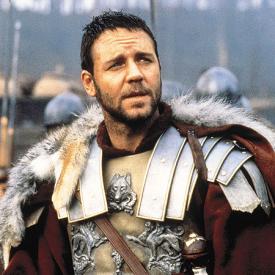 Gladiator is a spectacularly visual film. The majestic sets are stunning, and the opening battle scene is utterly amazing. The action and the atmosphere work so well.

From the moment early in the movie where the Roman messenger arrives back at camp sans head, you know this is a movie that takes its action seriously. The battle that follows is awesome. The fiery arrows and the burning catapult projectiles look as threatening as any modern day weapon. The many arena fights to the death are extremely brutal, even though the outcome is always foreseeable.

This movie will be forever remembered as the one that made Russell Crowe a star. Personally I felt he was better in LA Confidential, but that was more of an ensemble piece and here he is the star. He continuous his brooding that he did so well in LA Confidential. Granted, he has good reason, considering his wife and son are murdered. What I found interesting is that he plays an action character, but he really is not in that great of shape. However, his lack of a gym enhanced body just adds a more realistic appearance to this movie.

The problem this movie has is predictability. You know when he will win. You know when revenge will happen. You can see where the plot is going long before any of it happens. Another plot point that didn't help was all of the political intrigue. It took the plot away from the gladiator fights, and lets be honest, the fighting is the only reason for watching this movie. 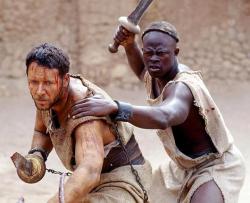 Scott has pretty much summed up my opinion of this movie. The stunning visuals Eric refers to are good, at least for a computer generated background. I for one, however, miss the old days when they either really went to a place or at the very least rebuilt it.