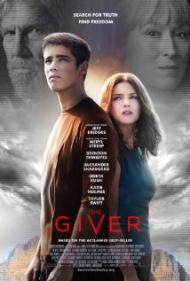 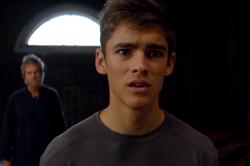 Jeff Bridges and Brenton Thwaites in The Giver.

Turning a beloved book into a movie is a tricky business. When it works, it really works. But when it fails, boy does it fail. The movie has to please diehard fans of the novel while at the same time appealing to those viewers (like yours truly) who haven't read it. Things that work on the written page don't always translate to the screen. Perhaps the single biggest factor is an intangible and somewhat arbitrary one. The world in the movie has to look and feel like the reader imagined it. It's the cinematic equivalent of a smell test. Well even without having read the book, I know that The Giver stinks. There's no way a novel as bad as this movie is would ever win a Newbery Medal and sell more than ten-million copies.

The Giver is a science fiction fable set in a not too distant, post-apocalyptic future. A new society has emerged where simple human emotions have been eradicated in the name of security and tranquility. The people live together as “The Community” under a system known as “Sameness”. Sex and love are antiquated notions the citizens have no memory of. Their lives are under constant surveillance and they all cheerfully abide by a very strict set of rules governing every aspect of their lives, including injecting themselves every day with an emotion blocking drug, that also eliminates the ability to see color. Using color to symbolize human feelings is a very simple yet effective metaphor. But it's been done before and put to better use elsewhere.

Jonas is chosen for The Community's most important job. The keeper of human memory. He or she is the only person with memories from before the war. According to the story this person contains the collective-consciousness of human history in their mind, although just how this was/is possible is not delved into. The current memory holder is called The Giver (hence the title) and the new memory holder is The Receiver. Although this doesn't appear to be the case in the movie, apparently in the book once the memory is passed on The Giver no longer has it. Jeff Bridges, who also produced this movie, plays The Giver.

One problem with the script is that it goes too far in order to lull the audience into buying this as a happy utopian society when we know from the outset that it's not. Anyone with half a brain understands what is meant the first time the movie mentions releasing the elderly citizens to “Elsewhere”. A big deal is made about the rules but then several characters break them multiple times with no negative consequences. I suppose this was intended to make the scene where Jonas is given the memory of what his father's occupation truly entails, more shocking, but it just seems like inconsistent writing to me.

One thing that doesn't translate to the visual medium of film is the idea that these people have no human emotion. You can imagine it as a concept while reading a book, but how does an actor remove all human emotion from a performance without sounding robotic? It's nearly impossible to do and the script certainly doesn't help. There are displays of emotion going on all over the place throughout the movie.

The memories themselves play out like flashes of celluloid greeting cards into which Jonas has been immersed. At first they are all pleasant memories. Jonas, on a sailboat, sees his first Technicolor sunset, Jonas slides down a snowy hill on a sled (a scene that brings to mind Rosebud from Citizen Kane), he attends an outdoor wedding that recalls The Godfather. Gradually the memories become darker and more violent. Jonas sees an elephant being shot and killed, then he sees war first hand. But these are just movie cliches posing as actual human experiences.

I will compliment the cast. Bridges and Streep are two of our greatest living screen actors and they bring considerable gravitas to their roles here. He's gentle and wise, she's ruthless and patronizing as the Chief Elder. Katie Holmes is perfectly cast as Jonas's mother, constantly chiding her children to watch their "precision of language". She alone manages to act without any trace of human emotion but then she had years of pratice being married to Tom Cruise. Brenton Thwaites continues his rise in the ranks of new male stars. Already this year he has appeared in two popular movies, the horror hit Oculus, and he was Prince Philip in Maleficent. He has the looks and charisma to go far. His acting talents may be limited but he manages to make Jonas memorable with a winning combination of sensitivity and courageousness. Taylor Lautner should be worried.

In short, the idea behind The Giver is intriguing, the way this film conveys that idea is not. Learn from my mistake. Skip the movie and read the book instead. 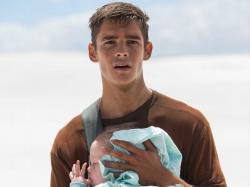 Brenton Thwaites in The Giver

I found the idea behind The Giver to be very intriguing, but as Patrick wrote, it is flawed. The most notable error is the way the film states emotions are being blocked by the daily injections yet everyone still acts on emotions. In the very first scenes we are told that Jonas and his friends are excited and nervous about graduation. Even the cold as ice Katie Holmes shows concern for her son’s actions.

As portrayed here, the injections merely numb emotions. Love and death are treated as mechanical events. Love is described by enjoying someone else’s company and death is a celebration of “release” from this world. It is implied that children come from surrogate births, although details are vague. Sex is never even brought up, other than one announcement stating physical touching is only allowed in ones dwelling. As Patrick noted, it is inconsistent writing.

Witnessing Jonas wake from his emotionally dulled life is beautifully symbolized by the use of color. The breath taking sunset Jonas sees is truly a gift from God. His sensitivity to un-sanitized death is a rude clarification to the sins of mankind not experienced since Adam and Eve ate from the apple. The Giver has blatant religious over tones. Several times in the film, the Giver mentions that people need hope and faith.

I was reminded of two things when Jonas takes baby Gabriel on the journey to freedom, safety and understanding. The first was Joseph taking Mary to a safe place to give birth. The second was the old John Wayne allegorical movie 3 Godfathers (1948), in which three men take an infant across a rugged landscape to the town of Jerusalem.

Clearly The Giver is working on similar ideas. John 3:16, “For God loved the world in this way: so much that he would give up his Son, The Only One, so that everyone who trusts in him shall not be lost, but he shall have eternal life.” Jonas crossing the boundary is so that the people of his community will no longer be lost but enlightened. His arrival at the Christmas decorated home with the baby, while “Sleep in heavenly peace…” is being played inside is too obvious to ignore.

I was emotionally affected by this tale. It was not due to the religious angle of the plot but of the awakening to the truth about the beauty of the human condition. Sure we want to protect ourselves and our loved ones but life is about the pain as well as the pleasure. Jonas learns that humans are meant to experience all that life has to offer, the tragedies and the triumphs.

I return to Patrick’s last paragraph. I did not find it a mistake to watch this movie but I wish the world in which this film is set was better explained. Sex and reproduction is skimmed over and the rules of the emotion blocking injection make no sense. I am glad I did not skip the movie and I may in fact, read the book.

Brenton Thwaites and Odeya Rush in The Giver.

The issue with the emotions is explained briefly in the movie. As Eric wrote, emotions are numbed, but the population still has feelings. The script isn't saying that these characters are robotic in their behavior, simply that they lack deep passions. However, it, like most of the details of this society, is glossed over and never fully explained.

With any of these dystopian stories with a set of strict rules, it's important that you buy into them, and frankly I was never able to accept them here. At least not as a living, breathing world. If viewed strictly as a parable for not conforming to society then it becomes easier to accept, but as a logical narrative it utterly fails. As an example, Jonas is sent to learn the entire history of mankind, the how of which is never disclosed, and yet everyone acts surprised that this changes him. What did they expect? Surely if they simply wanted a record of humanity's past as a source of reference then some sort of computer would make more logical sense as a storage device. And who exactly constructed the barrier and why would walking through it have the effect it does? There are just too many unanswered questions for it to make any kind of logical sense.

Like Patrick, I thought the cast did its best with what it was given. Jeff Bridges plays the wise old mentor well. He brings the right amount of gravitas and eccentricity to the part. Streep is fine, but clearly she's working for the paycheck this time around. Brenton Thwaites brings a likability to Jonas that keeps you rooting for him even during the plot's less plausible moments. His character has been aged from the book where the ceremony that determines he is to become the next Receiver takes place when he turns 12 and not 18 as depicted here. And I too wondered if Katie Holmes didn't see echoes of Scientology indoctrination in the society portrayed in the story.

The message behind the movie, as Eric described, is a fine one, but without enough logic to explain it or enough action to distract from the illogic of it, it's not strong enough on its own to make a good movie. It's also not delivered very subtly. With its teen targeted audience and moral message, it reminded me of a big budget, glossy after school special.