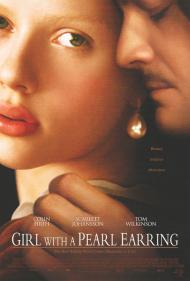 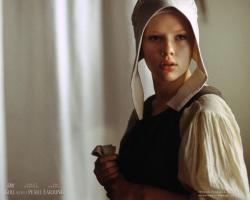 Girl with a Pearl Ear Ring has a great deal in common with the painting of the same name that inspired this film. It's beautiful to look at, interesting to ponder, but staring at it for 90 minutes isn't the most entertaining experience in the world. Not that there's anything wrong with this movie. I believe it accomplishes everything that it set out to do, which was namely, to create a back story to the Vermeer painting, and to explore that story in a visually artistic manner. It does both of these things, and to Art students/historians, I'm sure it will be a treat to watch, but myself, I was less than engaged by it.

Scarlett Johansson, who recently made a name for herself in Lost in Translation, stars as Griet, the girl who ends up in the painting wearing the titular earring. At the beginning of the film, she is forced by poverty into the position of maid for the Vermeer family. Once situated, she quickly finds herself at the center of three different men's obsession; the artist Vermeer himself (Colin Firth), Vermeer's lecherous patron (Tom Wilkinson), and a butcher (Cillian Murphy). Eventually, Vermeer's patron demands a painting of Griet, and Vermeer, in desperate need of money and continued patronage, accepts the commission, much to Vermeer's wife's dismay, who senses the attraction Vermeer has for their new maid. As far as plot goes, that's pretty much the whole story.

The film has a beautiful visual style and the director, Peter Webber, knows how to set up a shot. Great attention is spent on detailing the period, and it seems to pay off, at least to someone like myself, who isn't an expert on the period. Even while the plot is minimal, there is always something upon which your eyes can rest.

All of the emotions and most of the acting are underplayed and beneath the surface, with the exception of Tom Wilkinson, who gets to be a little more overt as the wealthy patron. Colin Firth plays repressed as well as anyone working today, and Scarlett Johansson does most of her acting with her eyes.

Again, while this is a beautiful movie to watch, unless you are vastly interested in the period or its subject matter, or you are entranced by its beautiful imagery, than this movie probably isn't for you, as it wasn't for me. 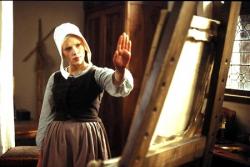 I don't have a whole lot to add. Scott and I had basically the same reaction to this movie. It is beautiful to look at and seems historically accurate (although everyone seems a bit too clean) but ultimately it failed to engage me. It does add a new layer to the definition of a moving picture since it comes as close as any movie I have ever seen to bringing a painting to life.

Scarlett Johansson looks amazing. She is pale as a ghost and has these incredibly over ripe lips. She has relatively little dialogue but makes the most of every line. Many of her scenes play like a silent movie; it's all about her eyes. Norma Desmond would approve.

This movie is definitely worth checking out. It is carefully crafted and acted. It just needs a bit more plot. 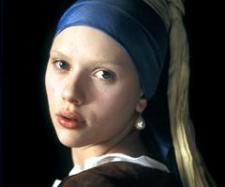 Yes, that is just like looking at a painting, but this is a motion picture. It has movement, and dialogue, and as such should never be treated as if it is a still life portrait. This movie has many subtle scenes. The one where Vermeer sees her hair is like him walking in on her completely naked. The scene of him piercing her ear is as if he is taking her virginity.