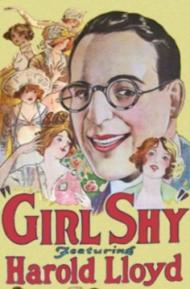 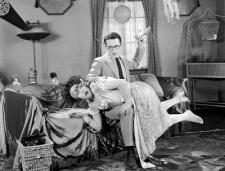 Harold acts like a caveman and spanks a flapper.

By the pristine look of 1924’s Girl Shy it is clear that Harold Lloyd took great care in preserving his movies. Very few silent movies have retained the clean crispness of this movie. This is Lloyd’s best romantic comedy. It is really a silent screwball comedy with witty dialogue in the form of subtitles. Of course there is the obligatory chase scene at the climax. And this is one of his very best. I had seen the final two reels before as a child. Harold racing to the church to save the girl he loves from marrying the villain.

He steals several cars, rides on horseback, jumps on the back of a speeding fire engine and grabs the fire hose as it unravels. This is just for starters. He also steals a trolley car and winds up on the roof as it speeds through the streets of Los Angeles. After hanging off the pole on top of the trolley car he lands in a passing car where he puts his foot on the gas pedal and makes the driver speed through the city. When they are pulled over by a motorcycle cop Harold, of course, steals the motorcycle. He then winds up in a horse drawn wagon. When one of the wheels comes off, he unhooks the wagon and leaps to the back of one of the horses where he rides it across the lawn of a sprawling Beverly Hills estate, where the wedding is taking place. Whew!

Lloyd plays his trademark horn rimmed everyman; although this Harold is so incredibly afraid of girls that he stutters terribly in their presence. Secretly though he has written a book called “The Secret of Making Love”. In the book he describes his many (imaginary) affairs, with advice such as treat a vamp with indifference and a flapper like a caveman. These are shown in brief fantasy sequences.

On his way to the city to get his book published Harold meets a pretty young girl as they are both boarding the train. She is, naturally, a wealthy heiress. Harold saves her dog and for the first time in his life converses with a girl without stuttering. Once in the city they part, but not before she gives him a quick, spontaneous kiss. They meet again in the country in a sweetly romantic scene that includes several of Lloyd’s trademark sight gags.

One of the funniest scenes takes place at the book publishers. All of the women in the office read Harold’s book and find it hilarious. Eventually the publisher decides to print it as a joke book called “The Boob’s Diary”. When Harold walks in while the girls are reading it they begin making fun of him. One very large woman tells him, “I just love a caveman.” Another asks, “Will you autograph my book, so I’ll have something valuable to hand down to my grandchildren?”

Speedy, The Freshman and Safety Last may be more celebrated than Girl Shy but this might just be his best movie. 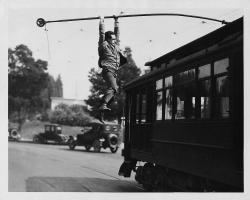 I don't know that this is Harold Lloyd's best film, but it is a very good one. It certainly contains one of the greatest endings of any of his movies, or of any silent film comedy. Patrick described the final chase scene in some detail, but mere words cannot do justice to Lloyd's frantic, frenetic race to the altar to prevent his love from marrying a bigamist. Every time you think he can't top himself or find a new way to change vehicles, he does just that. It's comic gold as only Harold could do it and is the highlight of an already funny film. Patrick mentioned watching it as a two-reeler on its own and it's easy to see how it could be lifted from the rest of the movie and watched by itself.

That final chase scene is, perhaps, the most famous sequence from this movie (Mike Nichols has admitted being influenced by it when shooting a similar scene in The Graduate), but what comes before it is also quite good. As Patrick wrote, this is a romantic comedy and one of Lloyd's best. He and the girl meet quite cutely on the train as he gallantly hides her dog for her and must keep it hidden from the conductor. Later they share another cute scene where Harold is fantasizing about her and thinks he imagines her reflection in the water without realizing that it's really her standing on a bridge above him.

His shy young man isn't a stretch from his stock character, but Lloyd plays it so well that it hardly matters. It is his stutter that is his only mark of distinction. Playing a stutter for laughs in a silent movie, is a tricky prospect, but Lloyd manages it so well that by the time the film ends you don't even need the title cards to tell you when he's doing it to get the joke.

Jobyna Ralston, Lloyd's frequent female co-star after he married his previous one, Mildred Davis, shares a nice chemistry with him. She's also quite attractive, which isn't necessarily something that can be said of other female actresses of the day whose looks haven't translated that well to modern viewers. Unfortunately for her, leading ladies in any of the three kings of silent comedy films were given the rather thankless job of supporting the lead by being objects of attraction, and this role is no exception. Although it must be said that she does the most she can with the limited role that she's given.

I think I would still list The Freshman as my favorite of all Lloyd's films. It just feels like more of a cohesive film. The final race to the church action sequence in Girl Shy is absolutely brilliant, but it stands out so much that it almost feels like a movie of its own and as has been said, could stand on its own. The Freshman ended with the football sequence, but that felt more like an organic part of the story rather than this amazing race. To pick between them though, is merely quibbling. They're both brilliant examples of silent film comedy at their best. 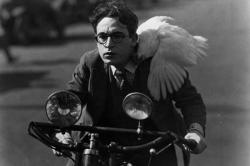 Harold will stop at nothing to get the woman he loves.

Like Patrick, I too recall having seen some of this film before. The most iconic moment being when Harold is on the back of the fire truck frantically pulling on the unraveling hose to stay on. I agree with Patrick that this is Harold's best film.

Both of my brothers rightfully praised the fast paced conclusion, but Girl Shy is brilliant throughout. The opening scene quickly and seamlessly establishes Harold's girl shy character. He begins to stutter whenever an attractive woman talks to him at the clothing store where he works as a tailor. His boss has to blow a whistle to get him to stop stuttering. One girl introduces her "vamp" looking cousin to Harold by bragging that she was the first person in her home town to correctly pronounce, "Mah-jong." A note of interest is that the two boys featured in this scene are two of the original members of the Our Gang comedy shorts, Joe Cobb and Jackie Condon.

Often on this site we have each written how silent films are amazing glimpses into history. Of all the silent films I have seen, I would recommend this one as a window into the 1920s. Not only are the fashion, cars and telephones on display but so are some dated cliches. In the fantasy sequence that Patrick mentioned, we see a look at two female stereotypes from that generation, the vamp and the flapper. Each term was a simple way of describing a certain type of woman. The vamp being a moody seductress and a flapper being a lively party girl. At one point, one of the secretaries sarcastically calls Harold a "Sheik." This is an obvious reference to Rudolph Valentino's character from the film of the same name, who was noted for taking and seducing women. Another term that needs clarifying, is "making love". Today it is used to describe romantic sex, whereas it was originally just a term for romancing someone.

So often in film, today as well as in silent movies, two people meet and fall in love for no apparent reason what-so-ever. The scene with Harold and the girl meeting and interacting on the train is one of the best ways of showing two people falling for each other. He helps to hide her dog and causes a ruckus, that completely distracts himself from stuttering. She in turn is grateful for his effort and becomes fascinated with him and his prospects of getting his book published.

Girl Shy is one of my favorite silent films. It begins with a man too shy to even talk to a pretty girl and ends with him so much in love with one that he breaks a plethora of laws in order to stop her from marrying someone else and profess his love to her. I liked this movie so much that I watched it twice before I wrote this review.