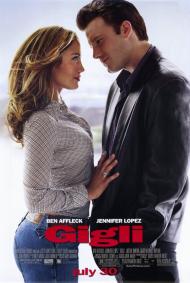 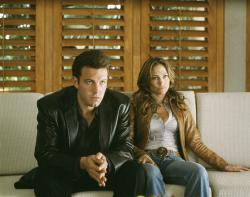 Most of the industry gossip surrounding Gigli has focused on the real life relationship between Ben Affleck and Jennifer Lopez. Not being a regular gossip column reader or 'Access Hollywood' watcher I cannot claim to be an expert on their relationship. So in watching this movie I was able to look beyond the actors and see the movie itself. This was not, it turned out, a good thing. Apart from the notoriety of their relationship, there isn't much else going for this movie.

Ben plays Gigli (rhymes with really), an underworld enforcer so soft hearted you have to wonder just how in the hell he got in the business in the first place. He also possesses the standard mobster accent more often associated with Brooklyn, New York than sunny L.A., which is where this movie takes place and where, it is revealed, Gigli was born and raised.

Louis, Gigli's mobster boss, gives Gigli the assignment of kidnapping a federal prosecutor's younger and mentally challenged brother in the hopes that this will force the prosecutor to drop the charges against Louis' boss. Louis doesn't trust Gigli to do the job, but for reasons never explained gives it to him anyway.

To keep an eye on Gigli during the job, Louis sends Ricki (Jennifer Lopez) to keep an eye him. Ricki is another softhearted enforcer, exactly the opposite sort you'd expect for threatening and deadly Louis to hire, but the only kind he ever does. Along with Ricki comes Ricki's ass. You might think it's a bit of a cheap shot to mention J-Lo's posterior, but since this movie constantly puts it quite literally in your face, it seems worth mentioning. Not since Streisand's stretches in The Main Event has an ass been featured so prominently in a major motion picture.

You'd expect of course, for Gigli and Ricki to fall in love, but there's a twist in that Ricki is a lesbian. But don't worry; she's just a Hollywood lesbian, which means that she's only gay until the right man comes along. It doesn't take long for the two 'killers' to fall in love.

While they're busy making goo goo eyes at each other, they're also developing a soft spot for their mentally challenged prisoner who, unsurprisingly, turns out to be sweet, lovable and fun to be around.

The movie meanders along with nothing really happening in the way of plot. In place of a story we are given a series of scenes, some of which work, and of some of which don't.

Two of the best moments in the movie are courtesy of two of the supporting actors; Christopher Walken and Al Pacino in what are really just glorified cameo appearances. Christopher Walken packs a lot of fun in his all too short scene as the police officer searching for the kidnapped brother. I kept waiting for his character to return, but sadly he never does. Pacino plays, in another unsurprising move, a mobster who shows up near the end of the movie in one scene to rant, rave, and just generally chew up the scenery.

In the end all this movie has to offer is weak characters, an even weaker plot, and an ending more obvious and Hollywoody than any I've seen in quite some time. But don't Ben and Jen look cute together? 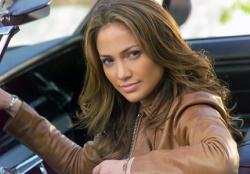 Did anyone actually write or direct this movie? It looks to me like someone just said, "Talk amongst yourselves, Ben and Jen, and we will film it. Make sure to give us a couple of shots of your rear Jen. Ben how about if you make some stupid expressions in the mirror. It will be a hoot."

Much like Scott, I kept waiting for something to happen. Ben and Jen play hit men who never hit anyone. Ben's big tough scene involves threatening someone with a clothes dryer. Jen scares a group of guys by explaining how you gouge someone's eye out, but never actually does it.

Someone wake me when it's over.