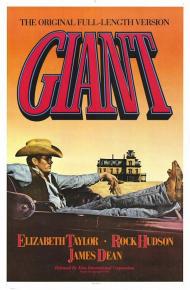 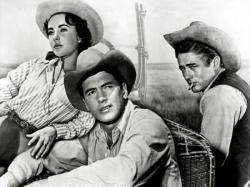 Sprawling. No review for George Stevens' epic production of Edna Ferber's novel would be complete without that word. It is almost as if they set out to prove the old saying that everything is big in Texas. From the larger-than-life charisma of the three main stars to the nearly 600,000 acres of Bick Benedict's ranch to the more than three-hour running time of the movie, everything about Giant is super-sized.

The movie tells the story of one Texas family over the course of twenty-five years, from the twenties to the years immediately following the second world war. Rock Hudson is Jordan 'Bick' Benedict, owner of one of Texas' biggest cattle ranches. He marries the beautiful and strong-willed Leslie Lynnton (Elizabeth Taylor). She's from back-east and the differences in their personalities and upbringings provides the gist for much riveting drama. The cog in their passionate marriage as they start out on their life together comes in the form of the white-trash Jett Rink (magnificently portrayed by James Dean in what is technically his finest acting role). When Bick's overbearing sister dies she leaves Jett some land. He refuses to sell out to the Benedict's and eventually strikes oil on the formerly worthless property.

The second half of the movie deals with the three children of the Benedict's. The main drama during this section of the movie is provided by Jordan Benedict III (Dennis Hopper). He wants to become a doctor rather than take his father's place as a rancher. He then proceeds to challenge his father's old-fashioned views even more by falling in love and marrying a Mexican woman. Meanwhile, youngest daughter Luz (Carroll Baker) complicates things even more when she starts to fall for her father's old nemesis, the now incredibly wealthy and powerful Jett.

Yes it is all pure soap opera but is nonetheless compelling cinema. It has three of the most important ingredients in making a great movie: quotable dialogue, memorable characters and iconic images. Like Gone With the Wind before it and The Godfather after it, Giant stands as one of the most entertaining and lavishly produced American motion pictures. 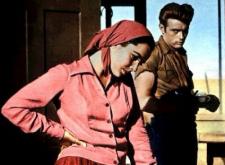 Giant, by no means, belongs in the same sentence as Gone With the Wind and The Godfather if you are discussing quality. The only similarity Giant has to The Godfather is that it shows the passing of one generation to the next. The only thing that reminded me of Gone With the Wind, is that both homes are pivotal sets and both are fake. The front was merely a facade built for the film. One scene later on, shows them playing tennis, supposedly next to the house. It is obviously a painted background, much like was used for the ceilings in Gone With the Wind.

Giant is long and flat out boring. But like Patrick, who agrees that this is a soap opera, you may occasionally be distracted by the cast. The early part of the movie is easily the better half. Leslie comes to Texas and must adjust to the heat and Bick’s sister. The best scene is when Leslie visits Jett. She finds newspaper clippings of herself, from the society pages, in his home. Obviously Jett has a thing for her. The scene has some underlying heat but it goes nowhere.

Like Taylor’s career, the longer this movie got the less attractive it became. Once the children grew up, the movie lost my interest. Dennis Hopper and Carol Baker could not hold my attention the way Taylor and Dean could.

James Dean died after initial photography ended, but the dubbing was not entirely completed. The scene at the end, when Jett gets his award is not Deans voice. He mumbled too much during filming, but did not live long enough to re-record the dialogue. The film was released more than a year after his death. One can just imagine what a career he may have had. His next film was to be Somebody Up There Likes Me. After his death the role went to a television actor, six years older than Dean, Paul Newman. One can only imagine.