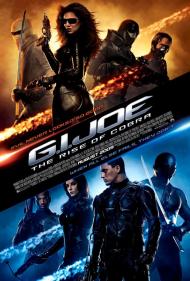 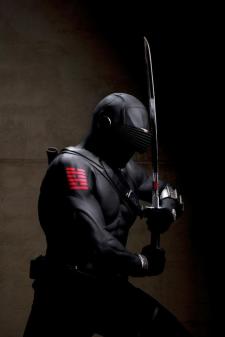 The Joes are back, including my favorite, Snake Eyes, played by Ray Park.

G.I. Joe: The Rise of Cobra has been generating bad buzz for a while now and currently it stands at 38% Fresh on RottenTomatoes.com. Based on that I went into it with fairly low expectations and was actually surprised to find myself entertained. Granted, it's nothing more than mindless Summer fun and the action, the dialogue and some of the acting is over-the-top, but that's exactly what I was expecting and that's exactly all it's trying to be. If it was trying to be a realistic and gritty war drama, then yeah, obviously it would have failed, but like director Stephen Sommers earlier Mummy films, it's not trying to be anything other than a big-budget, munch-your-popcorn, B-movie.

I was just a little too old to watch the cartoon or own the toys that inspired this movie, but a friend of mine's little brothers were big fans and I often saw bits of the episodes while at his house and saw all the action figures. I also remember playing a G.I. Joe computer game on an Apple IIe back in the day. So I was familiar with the various Joe and Cobra characters, but not enough to tell you what they changed about the story.

The plot is fairly simple. Former Doctor Who portrayer, Christopher Eccleston plays an arms dealer from a family with a history of arms dealing and grandiose plans. He plans to take over the world by launching missiles filled with nanobyte technology that will literally eat everything they come in contact with. Arrayed against him are the Joes; a multi-national military force whose control and financing is never really explained, although it seems vaguely American.

There are several action set pieces throughout the movie, especially a long, protracted chase scene in Paris. They are well done in a cartoonish sort of way. Much of the action is CGI and completely implausible, but if you think of it as just a live-action cartoon, it certainly helps. You shouldn't stop think too much or ask things like why the villains are driving through Paris instead of just flying over it.

Many of the characters from the old cartoon make an appearance here. Duke, The Baroness, Scarlett, Destro and Snake Eyes, among others, are all here. Although the script tries to give them a back-story, the melo-drama generated by the characterization is the most over-the-top portion of the movie; especially the Baroness's history with her brother and her relationship with Duke. You just kind of have to go with it and not take it too seriously. Yeah, some of the revelations will make you laugh, but like I said, this is a B-movie.

My favorite character in the film is Snake Eyes, played by Ray Park (Darth Maul in The Phantom Menace and Toad in X-men). Perhaps it helps that he has no lines in the entire movie thus saving him from the movie's greatest weakness; its script. He's the G.I. Joe equivalent of the X-men's Wolverine with his mysterious martial arts background.

If this movie came out 30 years or more ago it almost certainly would have been released in drive-in theaters. It's a B-movie with a capital B, but I was entertained by it. Isn't that what a movie is supposed to do? 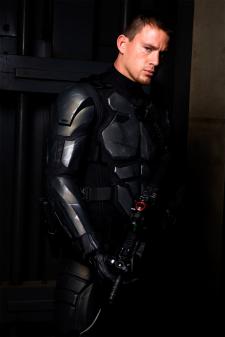 The only G.I. Joe toy I ever knew, or owned, was one that was big enough to date Barbie when he was on leave. In my day, G.I. Joe was an actual United States military serviceman. He was dressed in standard military issued uniforms and equipment, with weapons from every branch of the service. G.I. is a military abreviation for Government Issued. It was first used during World War II by American servicemen, in reference to the fact that everything they had was given to them by the United States government.

G.I. Joe: The Rise of Cobra only resembles the toy I knew in a few brief scenes where U.S. soldiers are shown shooting at an unnamed enemy. Most of the film plays like a science fiction film. As Scott wrote, this follows the cartoon and thus it succeeds if that is what you prefer.

Not only does this movie forget its origin, but it skews the cartoon to fit the New World Order. Even though the cartoon turned Joe into more of a superhero than a soldier, he was still called an "American hero." In G.I. Joe: The Rise of Cobra, the Joes are made up of people of different nationalities from around the world. G.I. Joe refers to Amercian Soldiers, not soldiers of other countries. If that is what you want, then you may as well call them NATO Joes.

The movie only has three good characters; Snake Eyes, Duke and The Baroness. Snake Eyes is awesome as the silent-but-deadly killing machine, leaving Duke and Ana to generate some emotional spark. Unfortunately, their relationship is skipped over very quickly. When all is said and done, we really do not care about their feelings for each other. The movie should have cut all of the scenes of Ripcord flirting with Scarlett. This would have allowed more time for Duke's and Ana's relationship without adding anymore love scenes. It also would have helped to minimize Marlon Wayans lousy acting.

This movie plays like a James Bond film. Duke is James, who runs into a hot, bad girl he once loved. Her feelings for him eventually outweigh her evil ways. He has to fight an over-the-top enemy who lives in an impossibly huge complex, that you just know will end up destroyed. Taken for what it is, G.I. Joe: The Rise of Cobra is not a lousy action movie, but it is not a great one either. 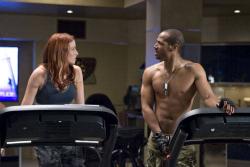 Rachel Nichols and Marlon Wayans in G.I. Joe: The Rise of Cobra.

I really hated this year's sequel so I had very low expectations when I sat down to watch G.I. Joe: The Rise of Cobra. I'd like to say it exceeded my expectations but that wouldn't be true. It was pretty much exactly what I expected it to be. A loud, mindless action flick with cartoon violence, ridiculous plot twists and bad acting. Yes this movie has all three but I still enjoyed it slightly more than I did Retaliation. Although I must admit this movie sets up the whole Zartan-disguised-as-the-President idea that I found so ludicrous in the second movie. Seeing this movie first helps with the chronology of the storyline, if nothing else.

The cast is also slightly better here. Dennis Quaid is good as General Hawk, a man he described as, “A mixture between Chuck Yeager, Sgt. Rock and a naïve Hugh Hefner.” Joseph-Gordon Levitt makes a memorable villain and Brendan Fraser shows up in a cameo as Sgt. Stone. Sienna Miller makes an even more memorable villain, spouting catty one-liners as she wreaks havoc, and Rachel Nichols is likewise a hot action babe in relentless pursuit of her, causing the Baroness to complain at one point, “That redhead is really starting to piss me off!”

Eric, you disliked Marlon Wayans' acting but I think he and Channing Tatum share a much more believable camaraderie here than Tatum and the Rock have in the sequel. Not that either movie will ever win any acting accolades. This movie did break one record though. 112 cars were crashed during production which surpassed the previous world record of 104 held by the 1998 movie Blues Brothers 2000. And that total doesn't include cars that were blown up, only the ones that were crashed.

I'd like to say this movie was far superior to the sequel but in all honesty they are both pretty awful. 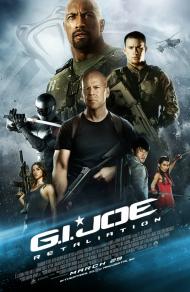