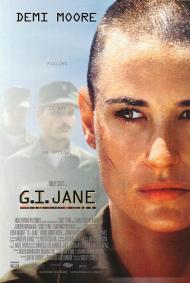 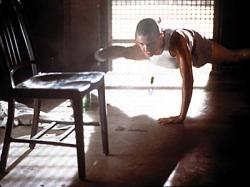 GI Jane is politically vague. A woman entering an all male arena could be good drama if only the plot could explain why.

Moore stars as Lt. O'Neil who joins the navy Seals training program. Actually, a feminist politician, making a point, gets her in, while the good old boys of Washington root for her to fail. Why O'Neil is so determined to make it herself is never made clear.

O'Neil is subject to all the degradation and most of the same physical training of the male trainees. At first she is allowed to let her hair stay long and live in her very own barracks. After feeling a bit of resentment from the men, she shaves her hair, moves into the all male barracks and demands to be treated equally. This is supposed to be that inspiring scene where the audience yells, "you go girl!" However, Scott handles it wrong by showing men as idiots. One male soldier (James Caviezel) wakes up to find O'Neil sleeping in a bunk next to him, and for some reason, throws a fit over her feminine hygiene products?

Later in the movie, the Seals are having serious war games. O'Neil literally gets beat bloody when she gets captured, along with some other soldiers. The Master Chief (Viggo Mortenson) who does it proves a point. All of the male prisoners react to her beating differently than if she were a man. O'Neil is determined and this just makes her tougher.

Early in the film you see O'Neil made up and beautiful. Then during her training we have montages of her, with shaved head, exercising alone. These scenes are supposed to show her determination and show off her toned physique. The only thing I got out of it was that she must have had implants, because women who work out that much usually go pretty flat chested. Moore maintains her large boobs the whole movie. The military is about team work. What is she doing spending so much time alone?

The weakest point, yet most critical to the plot, is that it never really explains why she is willing to put up with all this training. She claims early on, to her boyfriend, that she is doing it for her career. Later, a female nurse asks her why she is doing it. O'Neil goes on the defense and asks the nurse if she asks the men the same question. The nurse says yes and that most of the men say it is so they can blow shit up. To which O'Neil answers; "Well there you go."

Men have a sense of fraternity in an all male organization. They are brothers on an equal playing field. Add a woman to the mix and things change. The balance is broken. I know this makes me seem sexist, but there is a level of truth here. The mere presence of a woman in an all male military organization can be disruptive. It is not her or the men's fault. It is human nature.

In one scene, the Master Chief points out to O'Neil that she is not strong enough to carry a 200-pound man to safety. So in the barracks the men may flirt with her, but in the field they may argue over who gets stuck going on patrol with her. None of this is cohesive to a band of brothers.

Ridley Scott tries very hard to show both sides of the argument, but his feminist statement fails by never really giving O'Neil a discernible motive. It never answers some important questions. Is she trying to make a political or social statement? Does she truly like being a Navy Seal? Do her breast implants help keep her afloat?