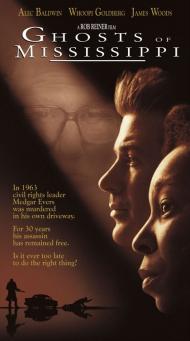 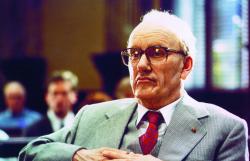 James Woods in Ghosts of Mississippi.

Ghosts of Mississippi tells the true story of how justice was finally served in the murder of Civil Rights leader Medger Evers. When the Jackson, Mississippi DA's office decided to reopen the case against self-proclaimed white supremacist Byron De La Beckwith in the early 90s, it made national news. Evers had been shot in the back while getting out of his car in his driveway just after midnight on June 12, 1963. De La Beckwith was tried twice in the 60s but both cases ended in hung juries. Finally, more than 30 years after his heinous act of cowardice and hate, during which he had repeatedly boasted about the murder, he was found guilty of committing one of the most infamous crimes of the 20th Century. Ghosts of Mississippi shows how Bobby Delaughter led the prosecution to a successful conviction.

Delaughter was married to the daughter of one of Mississippi's staunchest pro-segregationist judges. In a strange twist of fate, that no one would believe if it weren't true, the rifle used to murder Evers was found by Delaughter among his father-in-law's possessions. Baldwin does a passable Southern accent as the central figure trying to assemble the missing pieces of a 30 year old case. This is a man that saw the break-up of his first marriage, and endured numerous death threats and even a false-alarm bomb scare, to see that justice was eventually served.

Whoopi Goldberg is also quite effective as the extremely dignified widow Myrlie Evers, a woman that never gave up in her struggle to see the man that killed her husband held accountable for his crime. She is at first understandably doubtful of Delaughter's motives, but eventually learns to trust him. When asked how it is possible that she doesn't hate the reprehensible man that shot her husband, she quotes Medger saying, “When you hate, the only one that suffers is you because most of the people you hate don't know it and the rest don't care.”

James Woods plays to the back row as Byron De La Beckwith. I remember seeing this pathetic old man on the news and in the papers at the time. He was like an historical figure from the distant past brought to the present in the flesh. He was a cartoon racist spouting hate-filled dogma and making an embarrassing spectacle of himself. In that sense Woods didn't exaggerate at all and earned his Oscar nomination.

The title of the movie refers to some not very subtle symbolism. One of Delaughter's daughters repeatedly sees a ghost in her bedroom and Delaughter comforts her by singing to the ghost in order to get it to leave. At the beginning of the movie he sings “Dixie” to the ghost but later decides that isn't an appropriate song. The “ghost” is clearly a metaphor for not only Medger but for all those innocent victims murdered in the South where the accused was allowed to go free.

Director Rob Reiner also did a bit of symbolic casting. Brock Peters, the man that played Tom Robinson in the classic Southern courtroom drama To Kill a Mockingbird, has one scene. His presence provides an emotional link between the 1960s and 90s. His advanced age serves as a reminder of just how much water had passed under the bridge during the intervening years.

Ghosts of Mississippi is exactly what you expect it to be. An emotionally charged rendering of a piece of American history. It tells a story with a foregone conclusion that Reiner underscored with swelling music intended to induce both cheers and tears. The cast is good, the script decent and the story uplifting. It proves that societies can change and evolve for the better, even if the price is often paid in human blood.