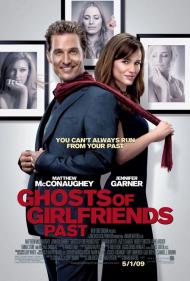 This is a romantic comedy that is barely funny and not very romantic.

Matthew McConaughey and Jennifer Garner star in this Dicken's Christmas Carol rip-off. Instead of a miser learning the benefits of generosity though, it features a man who sleeps around who learns the benefits of monogamy. If that sounds funny or intriguing in anyway, then I'm sorry to have mislead you. This is a romantic comedy that is barely funny and not very romantic.

McConaughey plays Connor Mead, a rich photographer/playboy who sleeps around with a lot of women with callous disregard for their feelings. In fact, he's famous for it. You'd think that this might yield a clue to future women about what they should expect from a relationship with him, but no, apparently every woman who dates him thinks that he won't dump them, despite having dumped literally hundreds of women before them. When the movie opens he even dumps three women at the same time via a conference call, while in the middle of seducing a fourth woman.

While in real life, a man such as Connor might just sleep with a bunch of women because he enjoys it, here in this female fantasy, he's just nursing a broken-heart and using his philandering to protect himself from ever getting hurt again, because when he was a boy his heart was broken by Jenny (Garner) when she danced with and kissed another boy. After that event he was taken under the wing of his old-school playboy uncle played with lecherous relish by Michael Douglas.

While preparing for his brother's wedding, Connor is re-visited by the ghost of his uncle who does his best Jacob Marley impression by telling Connor that he will be visited by 3 ghosts who will show him his past, present and future. Through these visitations Connor learns that he's been a jackass all his life and the only way for him to be happy isn't to have endless and consequence-free (for him) sex with hundreds of beautiful women, but to settle down and marry Jennifer Garner instead. Wait, is this a comedy or a tragedy?

Ironically, while this movie plays out like a female fantasy; the bad boy is only bad because he was hurt in love and settles down when he finds the right woman; it's really encouraging women to keep dating those bad boys, despite the fact that the real reason most guys like Connor sleep around with all those women is simply because they can and they enjoy it and they're not going to change no matter how magical the girl thinks she is. Call me a sexist pig, but maybe the women Connor dated in this movie should have realized what kind of guy he was when they started dating him. It's not as if he kept it a secret what kind of guy he was.

I've never been a big fan of either McConaughey or Garner and this movie didn't change my opinion. They're just a couple of mannequins, nice to look at, but not much charm. Whatever charm Garner might have certainly isn't used here as her part is small, generic and pretty dull. I guess if you like McConaughey's good-old-boy act you might find him charming here, but just where he got that southern accent is a bit of a mystery since in the flashbacks as a boy he clearly doesn't have it.

Douglas is good, but also underused. We get to hear about a few of his shenanigans (how Dean Martin once passed out at one of his parties) but see only a couple. Lacey Chabert as Connor's brother's bride-to-be also provides a few nice moments as the tense bride, but is also vastly under-used, which is a pity because she has more spark in her few scenes than Garner does in the entire movie.

One other thing this movie has going for it is its relatively short running time. At just an hour and a half at least you don't have to spend too much time with it. In fact, considering how little time you might want to spend with Connor Mead, maybe he was doing all those girls a favor by breaking up with them so quickly. 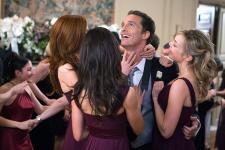 Lots and lots of sex does not guarantee happiness?

According to the sexual psychology of Ghosts of Girlfriends Past, and many other movies for that matter, men become misogynists after they get dumped. See When Harry Met Sally or Casino Royale for other examples. Women become sluts because their Daddy neglected them. Early in the movie Connor points out the Daddy issue to a girl he is about to sleep with, but she responds that it is not true because she never even knew her father. According to this movie, only damaged people sleep around.

Garner is adorable, and McConaughey plays a perfect playboy. It is about the only role he can really pull off. However, their relationship never rang true. He gets scarred just seeing her dance and kiss another boy at twelve years old, because he was too scared to ask her first. Years later he sneaks off after having sex with her for the first time. He is a coward when it comes to Jenny because he loves her, but he has no problem hurting hundreds of girls, because he only really uses them to inflate his wounded ego.

I do not know how much of this film's psychology is true or not, but I never cared about anyone’s sexual motivation. I was taken more in by Connor's relationship with his brother. When Connor visits his future, all of the people he hurt are nowhere to be seen. His brother is the only person to still love him, even though he caused his engagement to break up.

The moral of the movie is that lovers come and go, while family is with you forever. I have known plenty of man whores like Connor, and all have ended up married. I doubt it was because they suddenly resolved some middleschool ralationship issue. I think they just got to an age where they decided to settle down. It is either that or their hair was starting to thin. 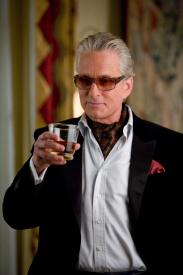 Wow you both took the psycho-sexuality of this movie way too seriously. It shows a specific situation and is not intended to make a statement about all men and women. Connor’s behavior rang true for me but his motivations would not fit every man that sleeps around.

Connor’s age also has something to do with it. Having a plethora of sexual conquests is healthier and more fulfilling when you are young. There is nothing more pathetic than that one old guy at the bar trying desperately to maintain his youth. And as we age it gets more and more lonely waking up alone. In short, sex is fleeting while true love can last forever.

Anyway this is just a silly little romantic comedy fantasy that offers a few tepid laughs and very little romance. I did enjoy McConaughey. He has a certain relaxed charm that works for me. I totally agree about Garner’s lack of screen presence though. Watching her act is as much fun as watching paint dry. Michael Douglas steals the few scenes he is in as the ghost of the ascot-wearing, lecherous Uncle Wayne.

It does contain heart in the relationship between Connor and his kid brother Paul. The only time I was moved was in the conflict and resolution between them. The scene where Scrooge – I mean Connor – wakes up a changed man is all about him realizing how he ruined his brothers’ wedding. It is the emotional peak of the movie and the subsequent denouement between Connor and Jenny is anticlimactic.

At the beginning of the movie Connor declares, “Love is magic comfort food for the weak and uneducated!” By the end he has come around to thinking, “Someone once told me that the power in all relationships lies with whoever cares less, and he was right. But power isn't happiness, and I think that maybe happiness comes from caring more about people rather than less...”