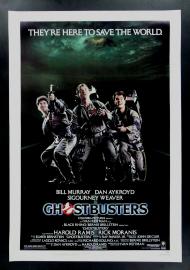 Ghostbusters is one of the all time biggest comedy hits ever to come out of Hollywood. It was the top grossing comedy of the 1980s and until Home Alone surpassed it in the early 90s it was the top grossing comedy ever. It spawned a massive hit theme song by Ray Parker Jr. “Who you gonna call?”, a sequel in 1989, and two animated television series. A third movie has long been rumored.

It was the brainchild of Dan Aykroyd and Harold Ramis. They first began writing the script during the summer of 1982 with Aykroyd and John Belushi envisioned as the stars. Belushi died of a drug overdose before production began and so fellow SNL alumni Bill Murray got the part of Peter Venkman. The rest is history.

The story begins with three parapsychologists (Murray, Aykroyd, and Ramis) getting fired from Columbia University after an encounter with a ghost that goes bad. They set up shop as paranormal exterminators (calling themselves Ghostbusters) in an old firehouse and make a commercial to get their name out there. They eventually get hired to investigate a haunted hotel. This leads to a breakout of paranormal activity around New York City.

After hiring a fourth ghostbuster (Ernie Hudson in a role turned down by Eddie Murphy) they get hired by a woman named Dana (Sigourney Weaver) whose refrigerator seemingly contains an other-dimensional demon calling himself Zuul. Eventually Zuul possesses Dana. Zuul, it turns out, is merely a servant to an even more powerful demon, a shape-shifting Sumerian God of destruction called Gozer the Gozerian. Meanwhile Dana's nerdy neighbor (Rick Moranis) has been possessed by another demon called Vinz Clortho. Zuul calls himself “The Gatekeeper” while Vinz Clortho is “The Keymaster”. They must join together to open the portal from which Gozer will emerge.

Some of the special effects now seem quite dated but in 1984 they were state of the art. Ghostbusters is a rare example of a big budget summer blockbuster that is also a critics' darling. It has been named to many all time best movie comedy lists over the years and has many quotable lines of dialogue. Perhaps the most famous being Murray's paraphrasing of Julius Caesar, “We came. We saw. We kicked its ass.”

Ghostbusters is quite simply one of the all-time great escapist movie entertainments. 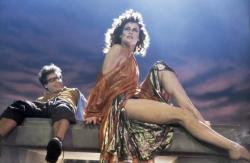 Rick Moranis and a hot Sigourney Weaver in Ghostbusters

Not only are the special effects quite dated but the entire film screams 1984. Patrick also mentioned the perennial Halloween theme song, while the rest of the soundtrack is also very 1980s. The clothes, such as Rick Moranis’s track suit and Sigourney Weaver’s entire wardrobe are all obviously of the Reagan decade. Even the look of Gozer, as played by Yugoslavia born Slavitza Jovan, was clearly inspired by then popular singer Sheena Easton.

Like all great films though, Ghostbusters transcends time. Patrick mentioned its legacy and it has continued to collect fans as the years go by. My youngest son watched and enjoyed it with me. It, for the most part, makes for a great family friendly Halloween watch.

Patrick mentioned the dialogue and I agree, Aykroyd and Ramis came up with some great lines. Bill Murray gets many of the best ones.  When I first saw this film so many years ago I thought, “Yes it’s true. This man has no dick.” was the funniest. This time around I really appreciated Murray’s sarcasm. After Weaver tells him that eggs suddenly started to fry themselves on her kitchen counter, he visits her apartment, finds some fried eggs on her counter and asks with all seriousness, “Are these the eggs?”

In fact, the entire cast gets a moment to shine. I always crack up when a perturbed Annie Potts answers the phone and say, “Ghostbusters, what do you want?” Ramis and Aykroyd created plenty of pseudo spirit references such as when Aykroyd explains, “Sir, what you have there is what we refer to as a focused, non-terminal, repeating phantasm, or a Class Five full roaming vapor. Real nasty one, too!”

At one point, Ramis tells a clueless Moranis, “We'd like to get a sample of your brain tissue.” Moranis simply responds, “Okay.”  Moranis also contributed to the script. I am not sure what lines he wrote but I like his efforts at flirting with Weaver, “I was just exercising. I taped a 20-minute workout and played it back at high speed on my machine so it only took ten minutes. I got a great workout.”

Ghostbusters is an incredible comedy, becoming a classic and for many, a Halloween tradition. 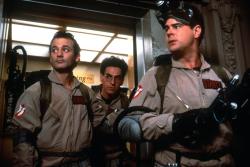 This movie is dated as my brothers said and perhaps nothing dates it more than the fact that three of the Ghostbusters smoke cigarettes throughout much of it. You'd never see this in a movie made today. The other thing that struck me watching it now for the first time in years is how, although it's a family film, and still finds new generations of fans, there are a few lines and scenes that seem out of place, like the "Dickless" line that Eric mentioned, but also the scene that heavily implies Aykroyd is getting a blowjob from a ghost. The tone of the film seems to be somewhere between a film for the whole family and one that was aiming for a more mature audience.

It had been many years since I last watched this film and one thing that struck me was that in my memory Murray dominated the film, it's actually much more of an ensemble piece as Eric mentioned. Moranis provides some of the biggest laughs in his relatively small part as the sad sack accountant. And I agree with Eric that Annie Potts is also quite funny as the overworked secretary. Eric also mentioned one of my favorite lines of Aykroyd's paranormal technobabble, which he rattles off so rapidfire and effortlessly. And of course, Murray is still Murray, dishing out his lines and insults with his usual flare.

One other thing that dates this movie is the unattractiveness of its leads. None of these guys are partiularly good looking although they have charisma to spare, particularly Murray. I don't see this as a weakness, but simply to note its abnormality in today's world where surely the studio would have insisted upon including at least one rugged, good looking Ghostbuster. Even Sigourney Weaver, while in good shape, isn't really a traditional beauty.

If I have a complaint about this movie at all, it's that some of the humor is so childish that it seems to be aimed at children. The ghost Slimer is a prime example of this type of humor. Although this is precisely why the movie still appeals because children of each generation find it accessible and silly, it is these jokes that I enjoyed the least this time around.

Any complaints though are easily dismissed because the movie is so damn enjoyable. It's almost impossible not to smile while watching it. Personally, I think that the long gestating third film should be abandoned. That it will improve on the first film's legacy seems highly doubtful and besides, who needs it? If you want to watch a Ghostbusters movie, just bust out the original. 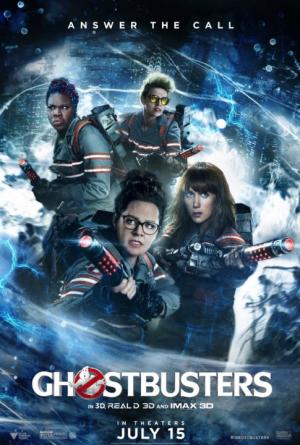