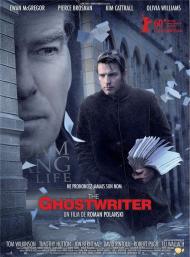 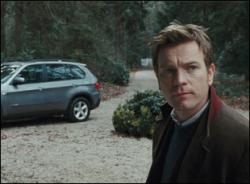 Ewan McGregor in The Ghost Writer.

The Ghost Writer is a political thriller whose release was overshadowed by the arrest of its director Roman Polanski. It's also a thinly disguised condemnation of British Prime Minister Tony Blair and his inner circle and their actions during the Iraq war.  Mostly though, it's a tense and fairly gripping story held together by Ewan McGregor and a well known supporting cast.

McGregor plays an unnamed Ghost Writer (he's simply credited as The Ghost) hired to finish off former Prime Minister Adam Lang's autobiography.  Lang is holed up on Martha's Vineyard and the Ghost flies there to replace Lang's previous Ghost Writer, who had apparently committed suicide.  Around this same time Lang is being accused of war crimes by ex-foreign minister Rycart for authorizing the illegal seizure of suspected terrorists and handing them over for torture by the CIA.  This causes a media furor that distracts Lang from finishing the book.  During the downtime, the Ghost discovers evidence that perhaps there was more to his predecessor's demise than a simple suicide and perhaps there's something in Lang's past that isn't all that it seems.

One of the best things about this movie is the way that despite a lack of action, it maintains a sense of tension and suspense throughout.  The tension comes from the direction and the dialogue.  It takes place in winter and the sky and the weather are grey and ominous.  The Ghost is shown several times going through security checkpoints.  His vehicle is checked for bombs.  He's followed (or is he?) several times.

Another big plus for this movie is that while it's condemning Blair and throws in a snide remark or two about Bush, it's not preachy or in your face.  It could be viewed in 100 years without any knowledge of the politics behind it and still be enjoyed.  You don't have to know that it's really about Blair and in fact, most of it is fictional.  Other message movies should take note, the way to get a political point (or any point) across in a movie is to wrap it in entertainment.  Don't lecture or get heavy-handed, slip your point in under the wire.

Brosnan does a good job as Lang, but is only really in a few scenes.  He gets a few nice moments with the Ghost, but you never really get to know him.  It's a deliberate strategy I suppose so that the "twist" ending (which really isn't all that twisty) can seem more effective, but it's hardly a fair look at Lang (or Blair).  He remains rather two-dimensional.

Olivia Williams, Kim Cattrell and Tom Wilkinson all play key supporting parts, but this is McGregor's movie and he's in every scene as the movie is told exclusively from his point of view.  He carries it well and remains likable and relatable to throughout, but again you don't really learn that much about him either.

I suspect that with its cast and British political backstory that this movie was better received in Europe than here. Even if you don't recognize all the faces or even know who Tony Blair is, there's plenty to enjoy here.

Ewan McGregor as the ghost writer.

Although Scott wrote it is not preachy, The Ghost Writer is a "political" thriller.  The main point being that Lang (Blair) allowed England to be treated as if it were The United States's bitch.  This same sentiment is in Love Actually.  Is this how many Brits feel?

Robert Harris and Roman Polanski take the audience to a bleak setting of mystery and corruption.  Everything is grey and foreboding.  It rains constantly.  Even the depressing characters seem to drip with dismay.

Although Brosnan is second billed he does not have much screen time.  The real relationship in the film is between the Ghost and Ruth Lang.  "Did you ever want to be a proper politician in your own right?"  He asks the former first lady, who snaps back, "Of course, didn't you want to be a proper writer?"

The big reveal at the end was supposed to be shocking, but was not.  We live in a world where an inexperienced senator with questionable citizenship became the President of the United States, gained control of 800 billion dollars, is dragging out a war he promised to end, prostrates himself in front of dictators and is forcing "free" citizens to pay for health care.  The secret in this film is hardly surprising.