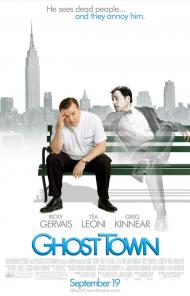 With Gervais talent, this movie should have been more than it is.

The biggest difference between British and American comedies is that American comedies tend to be populated by heartwarming characters who learn life lessons along the way, while British comedies are oftentimes populated by mean-spirited characters who care little for anyone but themselves and end up exactly as they started. Inevitably though, when a British comedian becomes too successful in Britain, he ends up trying to make it in America also, only because of this fundamental difference in humor, the same level of success is rarely reached. That's why you'll very often see British actors in American dramas, but so rarely see British comedians in a American comedies.

Take Ricky Gervais in The Office. His David Brent is awkward, unlikable, excruciatingly embarrassing and completely realistically human. And by the end of that series he hadn't learned a damn thing about how to be a better human being. Bertram Pincus, the character played by Gervais in Ghost Town, begins somewhat similar to Brent. He's unlikable, self-obsessed and annoying to others, but all in a very funny way. However, since this is an American film, a motivation has to be given for why he is this way. And by the end of the film you can be assured that he will have learned his lesson and changed his ways. Does this make it a bad film? Not really, but it doesn't make it a better film and it probably makes it a less funny one than it could have been.

Pincus is a dentist who, following a medical procedure wherein he "died" for 7 minutes, can now see dead people. The dead people are all the ghosts of people with unfinished business here on Earth, who can't move on until this business is finished. Once they discover that Pincus can see and hear them, they all start following him around hoping to get him to help them. For Pincus, who just wants to be left alone, this is his worst nightmare. He therefore leaps a the offer by one of the ghosts, Frank (Kinnear), who makes him a deal that if Pincus helps him, he'll get the other ghosts to stop bugging him. What Frank wants is for Pincus to breakup the impending marriage between Frank's widow and a human rights lawyer. Gwen (Leoni), Frank's widow, is an Egyptologist and Pincus' neighbor. As soon as Pincus sees her he decides that the best way for him to break up the marriage is if he gets Gwen to fall in love with him instead.

The funniest parts of this movie are the moments when Pincus is being rude and as the movie goes along he becomes less rude and more heartwarming. The romance between Gwen and Pincus isn't one for the ages. He makes her laugh, but that's about it. Gervais is a great comedian, but not so much a leading romantic man. At least the comedy succeeds. Along with Gervais, Kristen Wiig of SNL has a couple of funny moments. She has the potential to be the next breakout SNL star.

Undoubtedly Ricky Gervais is a comedy genius. Anyone who has seen his version of The Office and Extras has to agree with that. Unfortunately, this movie only scrapes the top of his talent without digging deeply into it. It is a lightheartedly enjoyable little comedy, but with Gervais' talent, it could have been more. 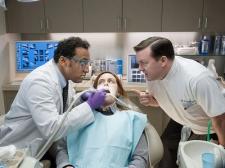 There are moments of hilarity, but not enough to sustain a movie.

Having never seen The Office I was not familiar with Gervais’ talent. As it turns out Scott is right about him being very funny. He is a modern British W.C. Fields. He has great timing and wonderfully comic facial expressions, whether appearing bored, exasperated or just not giving a shit.

The scenes where he is rude are absolutely the best parts of the movie. And he is not afraid to offend. The scene where he asks the Indian dentist how to interrogate someone is priceless. He begins the conversation by saying, “You’re from one of those scary countries right?”

Unfortunately, as Scott mentioned, Bertram Pincus undergoes an Ebenezer Scrooge like transformation that is not only not funny but is actually downright vomit inducing. I mean c’mon, when he helps the little boy find his stuffed animal you may as well be mainlining saccharine. There is a point when Ghost Town almost veers away from a totally predictable ending. But no, it turns out exactly as one would expect.

And I must second the opinion that Gervais has no business playing leading man in a romantic comedy. There isn’t the tiniest spark of chemistry between him and Leoni. In fact, given the setup, I can’t fathom them even becoming friends. There are moments of hilarity. Gervais fighting back his gag response being one. But overall Ghost Town disappointments. 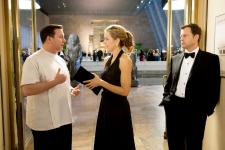 Gervais and Leoni generate the same chemistry as Charlie Brown and Lucy Van Pelt. As long as one is pissing off the other it is mildly entertaining. As soon as they get along they lose all of their spark. If the producers wanted a British/American romance they should have cast Hugh Grant. He would make a much more believable suitor for Leoni than the short, stocky Gervais.

Although Ghost Town only provided a few laughs, it does indeed demonstrate Garvais's charm as a comedian. His best moments are when he is simply making snide comments to others. My favorite scene is when he is sneezing as he passes through the spirits in the lobby, and the doorman keeps saying "Bless you." A flustered Garvais stops next to him and says, "Stop it! If I... if I sneeze again, I'll just assume... it's not you, it's... you can't... it's a little bit you, but it's mostly..."

The rest of the cast is merely there to act as straight men to Garvais's one liners. When he is released from the hospital, a nurse says to him, "Come back soon." To which Gervais responds, "What a terrible thing to say in a hospital." The only one to steal a scene from him is Wiig as the vain surgeon. As he is being rolled into surgery, she is busy talking over him about how she needs to go with a darker shade of spray on tan. You know, it will make her eyes pop.

A good romantic comedy has to be both funny and romantic. Ghost Town has a few funny moments, but only a few. The biggest romantic moment comes at the end, but that is between Leoni and Kinnear. I agree with my brothers. Although Gervais may have mean-spirited charm, he is by no means a leading man.