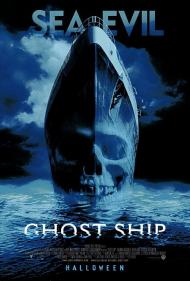 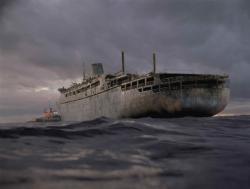 A horror movie has to have one quality to be a good movie. It has to scare the audience. Ghost Ship has a great set up and a great locale, but the fear factor barely registers. To make up for the lack of scary scenes the movie has some over-the-top gore. The opening scene is so over done that it was almost laughable. I don't want to describe it other than there is a lot of blood and body parts.

A salvage crew gets approached in a bar by a pilot who photographed a ship adrift at sea. The crew decides to go after it. Soon they locate the ship and discover it is an Italian ocean liner that disappeared in 1962. They board her and begin poking around.

The crew soon learns three things. One: The boat has a hole and will sink soon. Two: There is a hell of a lot of gold aboard. And three: If you go anywhere by yourself you die.

The best thing about this horror story is that everything gets explained. The writer at least thought it all out. In The Exorcist it never says why the devil chose a little girl to possess. By the end of this movie you at least know why everything happened.

An old scary ship is a perfect location for a horror story. The characters are all separated from civilization. The ship is decaying and very creepy. The sets are great, but the director never filmed the scenes to fully take advantage of the atmosphere. In The Shining the big hotel takes on an ominous personality. In Ghost Ship the ship never gets that eerie presence so valued in horror movies.

A quick paced story that could use a little slowing down. Sometimes in a horror movie just turning the corner in a dark location can be frightening. The director really blew many chances to make this adequate movie into something better and far more jump out of your seat scary.