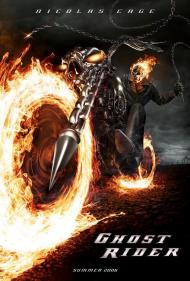 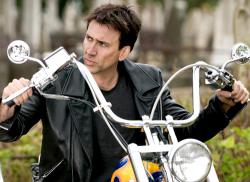 I have never read even one Ghost Rider comic. I do not have a clue if this film is loyal or not to the original comic book character. What I do know, is that Johnny Blaze, as portrayed by Nicholas Cage, is one boring, yet slightly weird, dude. He drinks jellybeans out of a glass and listens to The Carpenters. The funniest line in the movie is when he is intently listening to a Carpenter's song before a jump and gets interrupted by Mack. "Your stepping on Karen," Johnny tells him.

When the movie starts, Johnny is a teenager working the circus circuit with his dad as a motorcycle jumping team. He is also in love with a beautiful girl. One day he discovers that his dad has cancer. Enter the Devil, whom Johnny agrees to sell his soul to if his dad's cancer is cured. His dad wakes the next day cancer free, but then dies in a motorcycle accident a few hours later. Distraught, but still obligated to Satan, Johnny breakups with his girlfriend and goes on to be a huge success as a daredevil motorcycle stuntman.

The Devil's son, Blackheart, decides to make some problems that could usurp Daddy's power. So the Devil calls on the Ghost Rider to stop him and his elemental companions; earth, wind and water. You get the idea right away. He will have to fight, in turn, each of Blackheart's lackeys and then the movie will climax when he battles Blackheart himself.

The special effects of Johnny Blaze as the Ghost Rider are exciting as well as the best moments in the movie. The problem with these scenes are that they are very brief. His battle with each of the elementals are all extremely short. My first thought after every fight was, "Is that it?"

My biggest reservation about the movie, though, is Cage. Johnny and Roxanne are supposedly the same age yet Cage is 10 years older than Mendes. Long, although younger than Mendes, is closer to her age. The movie should have just kept him in the role. Cage's dark toupee is far too fake. He does a, "see my six pack abs," shirtless scene. But so what? Cage is in his 40's and no matter how youthful they try to make him, he still looks beyond middle age. At most, he should have played the Caretaker role.

The image of the Ghost Rider is one of Marvel Comics most iconic. With his skull ablaze as well as his chopper wheels, the Ghost Rider tearing down a lonesome highway makes a great poster, but the image alone does not translate perfectly to the screen, at least not in this film version. 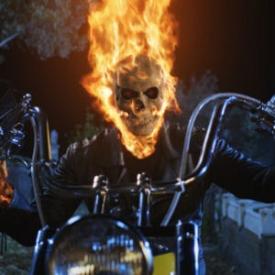 You nailed this one perfectly Eric. You pretty much summed up my feelings about this movie as well. Cage is too old for this part, and I for one am not even totally convinced that the shirtless scene Cage does is really all him. It's so brief and could so easily have been doctored. I'll admit I could be wrong, but even if it's really him, as you said, he's too old.

Like you I kept waiting for the big battles with the elemental demons. When it got to the water demon whom they save for last, I thought, this should be good. You know, water against fire? But their fight is the shortest of the bunch. And speaking of anti-climatic moments, how about the caretaker riding 500 miles with the Ghost Rider on his fiery horse, only to turn around and say, this is as far as I can go. Well what the fuck was the point of riding all that way then? I mean, apart from the cool image of the two of them riding side-by-side. And that's pretty much all this movie has going for it, some cool imagery.

It had the potential to be pretty dark. You've got a hero who works for the devil, who can see into men's souls and weigh their sins against them. This should have been an R-rated movie with a real edge, but instead it's just light-weight and a little quirky.

Like you Eric, I can't remember ever reading a Ghost Rider comic book, and I can't say this movie inspired me to go out and do so. 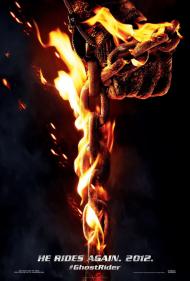