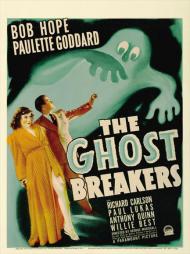 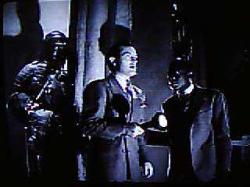 Before Ghost Hunters and Ghost Busters, there was The Ghost Breakers.   Originally a play and then two different silent films.  One scene has Hope reading from a brochure and remarks, "It sounds like a CeCille B. DeMille script."  It is in reference to that fact that DeMille directed one of the silent film versions.  It was later a radio show with Hope reading the lead as well as remade as Scared Stiff, (1953) starring Dean martin and Jerry Lewis.

Hope stars as a radio star, Larry, who gets mixed up with some gangsters.  He hides in a woman's trunk that is bound for Cuba.  She, Mary, has inherited a haunted castle and they, along with Larry's man servant Alex, head to the Caribbean to investigate the goings on at the castle.  For some reason they do it at night and the three have to deal with ghosts, zombies and killers.

In 1940 it was rare for a black man to have a large role in a mainstream film.  Other than Hope and Goddard, Willie Best has the most screen time.  Many jokes are made of his skin color.   The movie opens with the entire city out of power.  Larry cannot find Alex in his apartment, and says one of the most racist lines I have ever heard, "Oh, you look like a black out in a blackout. This keeps up, I'm gonna have to paint you white."

Later in the castle,  Larry says to Alex, "Something smells around here."  Alex responds, "It ain't fried chicken."   At another point, Larry finds Alex hiding and scared, "Your Bleached!"  He says to Alex who explains, "No I ain't boss.  When I get scared my albeano  blood shows through."   Amazing is that seventy years later this movie is more offensive today.  Tropic Thunder (2008) got into trouble with the thought police when they used the word "retard."  In The Ghost Breakers Hope says, "I'm mentally retarded. I'm still 11 years old when it comes to the 4th of July, circuses and haunted castles."

My favorite line though, is when someone is trying to warn Larry and Mary about going to the castle, because their are zombies there, "It's worse than horrible because a zombie has no will of his own. You see them sometimes walking around blindly with dead eyes, following orders, not knowing what they do, not caring."  Hope asks, "You mean like Democrats?"

I laughed several times during this film and enjoyed all of the political incorrectness.   Hope was such a likable guy that you never dislike him for his racial attitude.  I never realized how attractive Goddard was.  The director must have agreed as he finds many excuses to have her wear as little clothes as the Hays code allowed.  She is in a short nighty in one scene, and a bathing suit in another.  If that is not enough, her skirt gets ripped at one point, exposing one of her legs.

I had never heard of The Ghost Breakers before finding it on a rental shelf.  Perhaps people offended by the jokes have kept it from getting too much attention, but I find that to be a shame as this is a good film.  It is quick paced and set entirely in the dark.  It is a perfectly enjoyable Halloween watch for black and white film buffs. 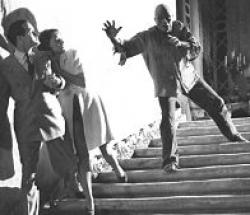 Bob Hope and Paulette Goddard run from Noble Johnson as The Zombie in The Ghost Breakers.

The Ghost Breakers re-teamed Bob Hope with Paulette Goddard in another comic version of a silent horror movie originally based on a play, like the previous year’s The Cat and the Canary. This movie does an excellent job of mixing humor with suspense and it drips with classic “dark and stormy night” atmosphere.

Bob Hope proves once again that when it came to tossing out one-liners he was unequaled (with the possible exception of Groucho Marx, naturally). At the beginning of the movie when the lights go out followed by a flash of lightening and a crack of thunder he quips, “Basil Rathbone must be having a party.” Later he makes this boast about his skills with the ladies, “The girls call me Pilgrim, because every time I dance with one I make a little progress.”

Eric, I’m surprised that you had never heard of this movie. Despite the insensitive racial jokes you mention this is actually one of Hope’s most famous and revered movies. I think the success of Gone with the Wind helped open the door for black actors having larger roles in mainstream movies. Like Mammy in that epic saga, Alex is a servant but with a much more important role than you would normally see a black person playing at the time. When criticized for portraying what others saw as demeaning roles Hattie McDaniel succinctly silenced them by stating, “I’d rather play a maid than be one.”

At any rate Willie Best is hilarious as the cowardly Hope’s equally cowardly butler. It’s unfortunate that racist societal views of the time kept him from becoming the star he might have been, Hope called him one of the finest talents he had ever worked with. My favorite exchange between them happens when they are at the haunted castle.

Alex: “Hey, boss, you ain't goin' upstairs, are ya? Where those ghosts is?”
Larry Lawrence: “Listen, you stay there, and if a couple a fellas come runnin' down the stairs in a few minutes, let the first one go. That'll be me.”
Alex: “If somebody passes you, that'll be me.”

You’re right Eric, The Ghost Breakers is silly and scary and therefore perfect for a Halloween watch. 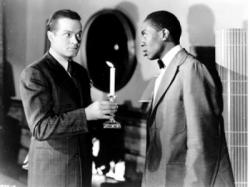 Bob Hope was funny, there's no question about that, but I don't always enjoy his movies. Sometimes he's a little too self aware in them, winking knowingly at the camera. Like Patrick said, he was the master of the one liner, but it often came at the expense of plot and any sense of tension. He never exactly buried himself in the part. You always knew it was Bob Hope. In this movie though, still somewhat early in his career, he manages to remain in character the whole time and without sacrificing the comedy. It might just be my favorite film of his.

Perhaps less surprising in my case, but I too hadn't heard of Ghost Breakers before we reviewed it. It's certainly not anywhere near as famous as the Road to... movies. The politically incorrect humor is strong enough that I can see television stations not wanting to show it. The line you mentioned Eric, about painting Alex white literally made me gasp, but then also laugh, although partly in shock.

Although Willie Best is playing a stereotype and some of the jokes are racist, he was a black man in 1940, co-starring in a movie with Bob Hope. And he manages to hold his own with one of the greatest comics of all time. Forget that Crosby guy, they could have made a series of movies with Hope and Best.

Hope is the focal point and everyone else revolves around him, but both Paulette Goddard and Willie Best definitely add to the fun. Hope shares a great, individual chemistry with both of them. There are echoes of Shaggy and Scooby Doo in Larry and Alex's relationship. It's a tough call as to which of them is the bigger coward, but both of them are always there for the other. Goddard, who is as attractive as Eric says, is also quite a match for Hope and they make a believable couple.

Along with reminding me of Shaggy and Scooby, the plot is rather similar to a Scooby cartoon, with the ghosts and zombies. While I wouldn't call any of it actually scary, there are some moments of tension. Hope even shows some backbone, most often against his will, but he handles a gun and tries to protect Goddard when she's threatened.

This would make good Halloween viewing, but it doesn't have to be watched exclusively at that time of year. It's funny enough to watch anytime.