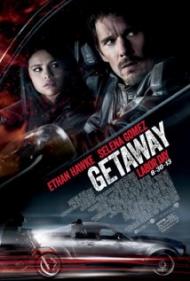 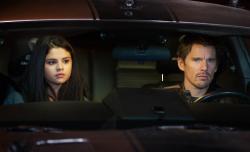 Getaway isn't just the title of this movie, it's also an instruction, as in, "Get away from this movie." The only plus to this silly plotted, completely implausible film is that it runs less than 90 minutes. Perhaps I can help set your expectations accordingly when I tell you that it's directed by Courtney Solomon, the director of 2000's Dungeons & Dragons.

Ethan Hawke stars as Brent Magra, an ex-racecar driver, because I can only imagine Nicholas Cage was unavailable. It's the kind of pulpy, b-movie actioneer that Cage usually can't stay away from. Instead we have Ethan Hawke at his least charismatic. His character is something of an enigma anyway, but Hawke's flat, uninteresting, and seemingly uninterested portrayal does nothing to add any spark. If he looked any more bored in the part, he'd be comatose. Clearly, this is a part he only took for the money. Actually, I really hope that's true. If he took it for any other reason, his career's in worse shape than I thought.

The plot is simple and stupid, but it doesn't waste time getting to the action. As the film opens, Magra's wife has been kidnapped and a mysterious voice on the telephone instructs him to steal a specific car and then wreak havoc all over town with it. If he fails to complete any of these tasks then his wife will be killed. Along the way, he is joined by a young woman played by Selena Gomez. Together, the two of them try to piece together the identity of the man pulling their strings and his possible motivation. All of it leads up to an unspectacular ending that leaves open the possibility of a sequel that will hopefully never come to pass.

One of the biggest problems with the plot is how outlandish it is. The voice wants Magra to disrupt the city by causing accidents at varying places. I'll leave the why a mystery just in case you get tricked into seeing this movie, but my point is that the reason he wants this is very weak. It also leaves far too much to chance. Magra could get caught or killed at anytime and it's only through sheer luck and happenstance that he isn't.

While Hawke looks bored, Gomez just looks over her head. Her character is supposed to be a whiz at computers and mechanics, but the technobabble she spouts is not only nonsensical, but completely unconvincing. Granted, she's not helped by the script at all. Most of her lines are simply her screaming in fright as the car careens around the streets of Bulgaria.

You can definitely tell that we've reached that fallow period at the movies, in between the summer blockbusters and the autumn prestige pictures. Getaway is exactly the kind of movie to be dumped at this time. Sadly, even knowing that going in won't help your enjoyment. This movie's not even bad enough to be enjoyable. It's just plain bad. 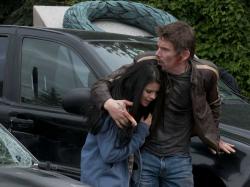 Not only is this story implausible but the setup of having a mysterious bad guy abduct someone to force someone else who cares about them to drive around a city, doing their bidding was already done better in 12 Rounds (2009), starring WWE star John Cena. Even the direct to DVD sequel, 12 Rounds 2: Reloaded (2013) starring fellow WWE star Randy Orton, was better made.

The direction here is uninspired and there are far too many edits trying to make up for it. Often a shot lasts all of a second. The real problem is in the writing. The bad guy can see and talk to them in the car with hidden cameras and microphones/speakers. Gomez creates a loop on the camera in the car so the baddy only sees that. What about the microphones? He could still hear everything they are saying.

Scott calling this outlandish is spot on. At one point Hawke and Gomez get trapped on a street surrounded by cops and cop cars. Hawke puts a gun to Gomez’s head and threatens to kill her, so of course the cops just let them drive away without any attempt at negotiating. As they drive away, Hawke says to no one in particular, what the audience is thinking, “I can’t believe that worked.”

The dialogue is pretty amateur. Some lines seem straight out of a Scooby Doo episode. At one point, Gomez says, “I just wish I knew what he was after.” To which Hawke adds, “Yeah, you and me both.”

The best lines are the ones that act as a narrative on how bad this film is. Hawke says of his wife, “I know what it’s like to disappoint everyone but I never thought that I’d let her down.” Yeah, with this film he has pretty much disappointed every fan he may actually have.

When Hawke finally gets his wife back he abandons her almost immediately. The bad guys grab Gomez and drive away. Hawke lets go of his wife and says, “They got the kid. I gotta go after her.” This woman, who was abducted, beaten and had her life threatened, simply responds with all casualness, “Okay.” Typical male, abandoning the middle aged woman to chase after the hot young girl.

The movie ends with the line, “It has been most entertaining.” I am glad they included that line because without it, there is no other evidence to show otherwise.