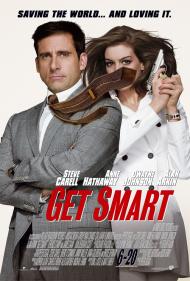 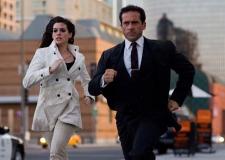 An easily accessible film with comedy, action and a little romance.

Having never seen an episode of the television show, Get Smart, I had very little knowledge of the characters. It mattered not, my son and I enjoyed this movie very much. It is an easily accessible film with comedy, action and a little romance.

Maxwell Smart is an analyst for a government secret agency called CONTROL. He wants to become a field agent but is considered too “valuable” at his current job to get promoted. After CONTROL gets compromised and all of the field agent’s identities become known to the bad guys, KAOS, Max finally gets his chance. He is teamed with agent 99, an attractive girl who recently had major plastic surgery. Together they venture to Russia in search of the head of KAOS, Siegfried. They have to deal with plenty of gun toting criminals, amorous over weight Russian women and a seven foot KAOS henchman. My WWE wrestling son was delighted to see that the henchman was played by Smackdown’s The Great Kahli.

Max and 99 also develop feelings for each other, which is made all the more complicated when Max is thought to be the agent that betrayed CONTROL. The movie ends with Max, 99 and the actual double agent battling over a nuclear suitcase in a burning car, that is on rails heading towards an oncoming train. KAOS wants to kill the President of The United States in a real showy way and the movie makers obviously wanted a real showy action sequence.

Whereas, this movie is all about the sight gag and the slapstick, it does have a great joke that takes almost the entire movie to get to the punch line. Early on Max gives a report to CONTROL that contains this line about terrorists, “It’s what they do. It’s not who they are.” To anyone who agrees with that hippy Hollywood logic, let me ask this, If our actions and behavior do not define us, what does? At the end of the movie, with a nuke placed in Los Angeles, Siegfried’s henchman asks about all of the movie stars that will be killed. Siegfried responds sarcastically, “What would we do without their razor sharp political advice?”

Get Smart is the most fun I have had watching a movie this year, that does not contain a superhero. It leaves open plenty of room for a follow up film. Save me a place in line. I'll buy the popcorn.

Carell and Hathaway have comic chemistry.

As soon as I heard that line about Hollywood's "razor-sharp political advice", I thought of you Eric. I knew you'd love that line.

I've never been a big fan of the spy-spoof genre, probably because I've always been such a fan of the serious spy genre. Austin Powers is the only one I've really enjoyed, and that because it goes so far in the extreme that you're not supposed to take any of it seriously. Having said that, I did enjoy Get Smart some what. It's not a classic, but the cast is all likable and the pace is swift. Most importantly though, it's not directly spoofing spy movies, but simply adding comic moments to what with very little rewriting could have been a serious movie, albeit a cliched one.

One thing that this movie does well is mix comedy and action. It actually contains some well done action scenes, which is something you don't usually see in comedies. I mean you never believe Austin Powers is in danger, but the final battle in Get Smart on the SUV on the railroad tracks is both funny and tense.

The success of the movie though is almost entirely due to the likability of Steve Carell. He bumbles along and demonstrates some good chemistry with Hathaway. Anne is determined it seems to prove herself as a serious actress, but I hope she doesn't abandon comedies because she has good comic skills.

Hardly a classic, but a movie that I enjoyed, almost in spite of myself. 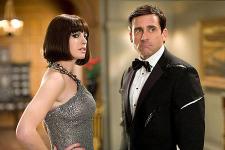 Hathaway and Carell make it work.

Although evolved from the old television series this is a very different animal. It has plenty of humor but the action is much more prevalent. Even Max’s most famous lines are used sparingly, “Would you believe…?” and “Missed it by that much.” What makes this version work is the casting of Carell and Hathaway. They play off each other well. My favorite scene was where they try to outdo each other dancing.

The supporting cast features such bold faced names as Alan Arkin, Dwayne Johnson, James Caan, Bill Murray, Terence Stamp and even Masi Oka from the television show Heroes. Arkin, whose career has recently been revitalized, gets the juiciest of the supporting roles as The Chief. He even gets to play hero at the climax.

Get Smart is a pleasant bit of lightweight entertainment. No more no less.