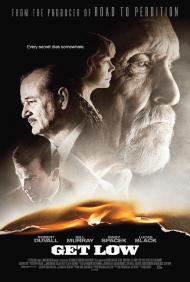 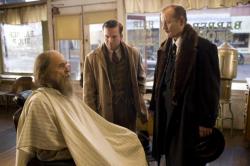 Robert Duvall, Lucas Black and Bill Murray in Get Low.

Get Low is a low key, slow paced, mildly entertaining movie that feels like a short story stretched into a movie.  Robert Duvall gives a heart felt performance in the lead role of the type that is likely to get an old actor such as himself an almost guarenteed Oscar nomination.

Duvall plays Felix Bush, an old hermit living in the woods in 1930s Tennessee.  There are lots of stories floating around about him in the small nearby town.  Some say that he killed a man, but no one seems to know the real story as he's lived alone with minimal contact for over 40 years.  When he receives word that an old friend has died, Felix shows up in town one day to prepare his own funeral, only he wants his funeral to take place before he dies so that he can attend and he wants anyone who knows a story about him to attend the funeral and tell the story so he can hear it.  He also wants to tell his own story so that everyone will know the truth about his solitude.

Felix finds an eager helper to his scheme in the form of local undertaker, Frank (Murray), who sees this as his chance to make some money off the old crazy guy.  Murray gives a nice, subdued performance, while still managing to provide what comic relief there is.  Assisting Frank is Buddy (Black), an earnest young man who wants to seriously help Felix and keep him from harm, both from others and himself.

Rounding out the main cast is Sissy Spacek as Mattie, a woman Felix once had a relationship with and the only person in town who really seems to know anything about him.

The movie runs 100 minutes and keeps your interest for most of it, despite being very slow paced.  It all builds up to the discovery of what Felix did that made him a hermit.  Although there are some entertaining moments along the way, as a whole the ending doesn't really seem worth the wait.  It's a very simple story with no great life lessons learned along the way.  As a short story it has its interesting moments, but the 100 minutes does stretch the story pretty thin.  It's definitely not the kind of movie that is going to make you want to watch it again.

Duvall does do a good job as the crusty old man.  He performs several dramatic scenes, some humorous ones and a couple of poignant ones and keeps all of them fairly subtle and believable.  This isn't an over-the-top movie in anyway and his acting suits the mood.  As I said, because this is Robert Duvall, he's quite likely to receive an Oscar nomination.  Not that another actor couldn't have done as good of a job, but if not for him, a movie this small would probably be overlooked.

Robert Duvall and Sissy Spacek in Get Low.

Even with Robert Duvall it was overlooked. He did receive a Screen Actors Guild nomination but Get Low was completely snubbed by both the Oscars and the Golden Globes, which is a shame since this is a heartfelt, extremely well-acted, little movie about the power of forgiveness. The back story of what drove Felix to become a recluse was fabricated for this screenplay but its basic premise really happened. It was loosely based on an old hermit in Tennessee named Felix Bushaloo who, in 1938, threw his own funeral party - while he was still alive.

The movie begins with a house in the woods completely consumed by fire. A man on fire staggers from a second story window, jumps to the ground and runs away. Felix Bush's secret that he kept to himself for 40 years is the truth about what exactly occurred in that house before the fire started. Felix built his own prison and served time alone for four decades. It is only when he knows the end of his life is near that he ventures forth to confess his sin and finally seek redemption. As he puts it to Buddy, “There's alive and there's dead. And there's a worse place in between them, that I hope you never know nothing about.”

Duvall's performance is quietly brilliant. Felix Bush is a man who cannot forgive himself. He's carried his burden of guilt around for so long that it has become a part of him - like a scar on his soul. It is also his identity to the outside world. Rumors about him have been told for years, passed along by each new generation of school children, even though no one knows the exact details of what he did. Well almost no one. There is one man -a preacher played by Bill Cobbs- that Felix confessed to long ago but when he was told to turn himself in and beg the Lord for forgiveness, Felix refused. As he later explains it, “I didn't want forgiveness. No. I needed to hold on to what I did, to be sick from it every day of my life.”

Bill Murray provides solid support, and as Scott wrote, he also provides a bit of levity during the solemn proceedings. He delivers lines like, “I sold 26 of the ugliest cars in the middle of December with the wind blowing so far up my ass I was farting snowflakes into July.” as only Bill Murray could. Sissy Spacek has less to do but she plays off of Duvall well and they share several emotionally powerful moments together. Lucas Black, as the young husband and father who is determined to help Felix, is also quite good, as is the always reliable Cobbs.

Sure the story isn't told in a rush but I was drawn into this world, and became emotionally invested enough in Felix, that I didn't mind the slow pace. Felix Bush was a sad, sad man who fell in love and lost, and paid a very stiff price for it. But in the end he manages to come forth, put aside his pride, and finally seek forgiveness before he – as he puts it. “Gets Low.” 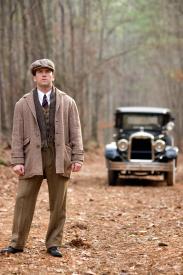 Lucas Black in Get Low

I am with Patrick on the issue of the film’s pacing. It moved along as it needed to. I was also drawn in and became emotionally invested, not only in Felix and his secret but in Buddy as well. I was not as taken with Bill Murray as my brothers. Sure he provides some smiles but in another time and place his role would have been played by Phil Silvers. Not only does he go on and on about making money but note his reaction when he hears that Felix is going to raffle off his very lucrative property.

I liked Buddy’s story. He wants to earn Felix’s money to benefit his family but he feels a bit guilty about taking it. Buddy is Frank’s Bob Cratchit. When they first go to visit the shotgun wielding Felix, Frank makes a scared Buddy go up to his house alone, “I'd rather you go too.” He says to Frank, who responds, “No doubt. But if you don't do this by yourself, you'll never know if you're any good. And you'll never be good if you don't know that you are.”

Felix hires Frank and Buddy to arrange his funeral party but he only trusts Buddy. When the radio announcer tells Felix he will buy a raffle ticket to win his property, Buddy finds it offensive and states, “You’re betting on a dead man.” When Felix must make a financial decision, he turns away from Frank and asks Buddy, “What do you think, boy?”

Felix and Buddy become genuine friends. Black has a great line when talking to Duvall in one scene, “I also think that people are so scared about what they don't know that they make things up to feel better about it.” At another point Felix says to Buddy, “For every one like me, there's one like you, son. I about forgot that.” As a young, honorable married father, you cannot help but like Buddy. It is his story that kept me watching. In fact, after watching Get Low for the first time, I started it over as I wrote this review.

Buddy is who Felix wished he had been more like. After all, the more honorable your life, the less forgiveness you need ask for.