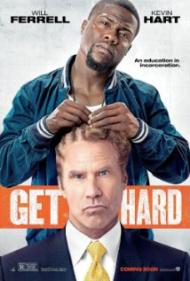 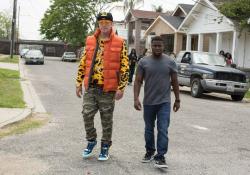 Will Ferrell and Kevin Hart in Get Hard

Get Hard is one of the most racist films I have seen in a long time. It begins with clips of random wealthy white people living pampered lives and black people living in poverty. All of the house and yard workers are unhappy people of Latin descent. It then goes even further to show that the rich whites are only rich because they either inherited it or married into it. Will Ferrell’s extraordinarily wealthy potential father-in-law tells him that he started his company all by himself with just a single computer … and an 8 million dollar loan from his father.

Will Ferrell plays James King, a rich money investor who apparently makes his company more money than some countries entire gross domestic product. In one day he made them 28 million dollars. However, this college graduate financial genius is too stupid to see that his wife is a selfish bitch and his boss is a criminal. Please! If you cannot see that then you have no business watching movies.

He gets framed for fraud and sentenced to San Quentin. He is given 30 days to get his affairs in order. He decides to hire his car washer, Darnell Lewis (Kevin Hart) to prepare him for prison. His logic being that by virtue of Darnell being African American, he must have spent time behind bars. "Given your low economic status, your perceived lack of college education... statistically, you definitely went to prison!" Darnell is actually a very hard working family man struggling to buy a new house in a better neighborhood so as to get his daughter into a better school. Get it? White people do not deserve what they have but hard working minorities do.

Okay, we also have the stereotypical black gang bangers that Darnell introduces James to, so as to provide James with protection when he is in prison. The black folks in the hood are every stereotype you can imagine. From drug dealers who hangout on their porch to twerking ho's, nothing is missed. My favorite moment in the entire film is when James relates better to them than Darnell. You know, because Wall Street types are just like street gangs only with better clothes.

We also have the white supremacy group who seems around only to balance things out as their presence does not provide any real laughs. When trying to drive away from them, one topless girl, for some unexplained reason, jumps onto their vehicle wind shield. It provides Kevin Hart with the chance to yell, “Nazi tits!”

When the film is not burdened with race clichés and social envy we have endless amounts of dick jokes including a scene where James tries to gives a man a blow job in a restaurant bathroom so as to practice his prison survival skills. Darnell suggests, “When life throws you Dick you make Dick-ade!” while James ponders, “Dick-ade doesn't sound like a significant improvement over dick.”

It is not until the final fourth of the film, when it centers more on James and Darnell becoming legitimate friends who join forces to prove James’ innocence, that I truly found myself caring at all where the film was heading. Ferrell and Hart make a good comedy team. Their height difference alone is worth a chuckle. Hart is playing a rounded enough character while Ferrell is playing just another variation on his many idiot personas.

If you enjoy low rent penis and race jokes, Get Hard may be for you but I would not brag about that. 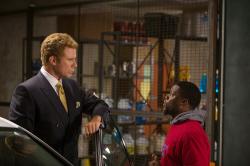 Will Ferrell and Kevin Hart in Get Hard.

Yes, this movie is filled with stereotypes, but instead of perpetuating them, it's satirizing them. It exaggerates Will Ferrell's character and especially his wife and father in-law to make them the ultimate villain in an Occupy Wall Streeter's fantasy. But as Eric pointed out, the stereotypes are evenly spread amongst the rich, the poor, blacks, whites and homosexuals. Eric, are your political beliefs getting so sensitive that they're interfering with your sense of humor? Besides, if this movie has a political point to make, it quickly gets lost amongst the prison rape jokes.

As Eric wrote, Ferrell and Hart make a great team. They're like a modern version of Gene Wilder and Richard Pryor. The difference between them is the one Eric pointed out. While Kevin Hart is playing a real person, in an admittedly surrealized world, Ferrell is still playing a sketch character. He never feels real. It's hard to believe that someone as naive and dimwitted as he is would ever be as successful as he is somehow able to be. Eric gave away that it is his boss who is the film's real criminal, but that's not a spoiler as the film intentionally telegraphs that information ahead of time and makes a big joke about how easy it is to see that it's him near the film's climax.

I agree the jokes are very low rent. They are also racist and homophobic, with gay men coming across as perhaps the most stereotypical in a movie filled with stereotypes. However, despite the silliness of it all, I did laugh out loud at several scenes. The scene with gang bangers discussing the difference between a standard IRA and a Roth IRA is worth a chuckle, but I laughed hardest at the prison riot scene and the subsequent one with the shiv sticking out of Ferrell's forehead.

If Ferrell and Hart ever want to rival Wilder and Pryor as a comedy team, they need to pick their next project with a little more circumspection. A smarter script that kept their characters—especially Ferrell's—grounded somewhat in reality, and with a little more heart would go a long way to improving their prospects. 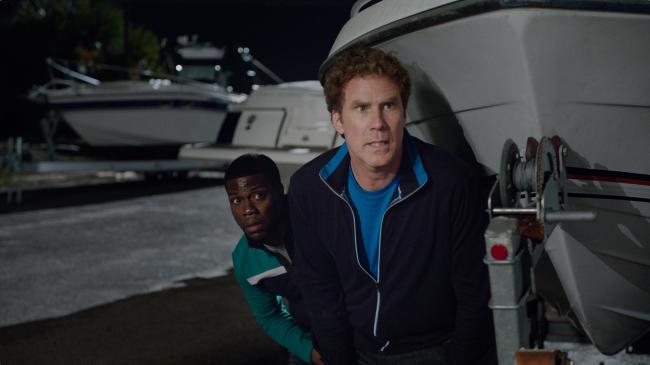 Kevin Hart and Will Ferrell in Get Hard.

The team-up of Will Ferrell and Kevin Hart has potential but their talents are wasted on this incredibly lazy and unfunny script. The only good thing I can say about it is that in terms of stereotypes it's an equal opportunity offender. It's equally offensive to blacks, whites and gays.

I've never really understood why many straight men seem to find the idea of sex -in general- to be funny – and the thought of sex between two men to be even funnier. As a gay man I don't find the idea of dick sucking to be inherently hilarious so right there at least 60% of the movie's jokes failed for me.

There is a smidgen of heart in the friendship that ultimately blossoms between James and Darnell but it's hardly enough to make up for all the infantile and unfunny humor that precedes it. Will Ferrell is getting too old for this character. I wonder if he'll ever try his hand at acting by playing an actual human being and not a one-dimensional idiot. He lacks the charm and likability of Steve Martin or Jim Carrey, both of whom played more lovable idiots than Ferrell seems capable of doing.

Kevin Hart does what he can. As my brothers noted he alone is playing a -sort of- real person. But even he can only do so much with this steaming pile of crap. It's a shame too because the central premise is ripe for satirizing and maybe with a better script Hart and Ferrell could have done something comparable to the best work of Gene Wilder and Richard Pryor. One thing's for sure, Get Hard ain't it.