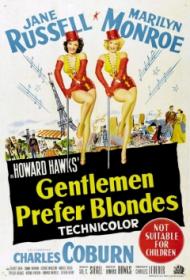 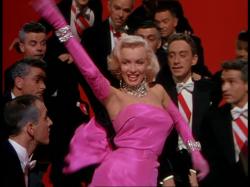 Gentlemen Prefer Blondes is a showcase of movie star charm. It is a simple story with some okay songs. However, Jane Russell and particularly Marilyn Monroe, raise this movie to classic status with their mere presence.

Monroe and Russell play women on the prowl. Monroe's Lorelei is a gold digger, teasing her wealthy boyfriend till he pops the question. Russell plays a woman who just loves men. Together, they go to Paris while Lorelei's boyfriend makes up his mind.

The movie is suggestive for the 1950's. After the sexy opening musical number, Monroe tells Russell that she thinks her boyfriend is going to propose because she could see that 'he has a bulge in his pocket.' She is talking about an engagement ring in his pocket of course. On board the ship to France Russell sings 'Ain't There Anyone Here For Love' while surrounded by a bunch of Olympic athletes wearing bathing suits.

Although a musical, this movie really shines in the comedy area. Monroe's insistent flirting and scheming comes to a hilarious head when she gets her ass caught in a portal. The funniest moment in the movie though belongs to Russell. She imitates Monroe in a hilarious court room scene. She uses a blonde wig and the breathy voice.

Although this movie is extremely lightweight, it does make for an enjoyable viewing. This is the movie that made Monroe a star. It contains her most famous musical number 'Diamonds Are A Girls Best Friend'. It also set up her stereotype as the 'dumb blonde'. At the end of the movie, Lorelei is confronted by her fiancee's father who says 'You just want to marry my son for his money'. 'No', she responds. 'I want to marry him for your money'. I guess dumb is relative. 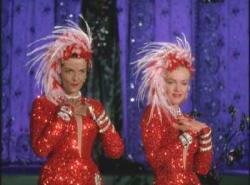 If I had to pick a single movie that best captures the charm of Marilyn Monroe, it would have to be this one. She's positively radiant and even though it was a stereotype she fought against for most of her career, she plays the slightly air headed blonde to perfection. Some like it Hot is better, but that's Jack Lemmon's movie. Gentlemen Prefer Blondes is all about Monroe.

I disagree strongly with Eric that Russell gets the funniest scene in the movie. It is Monroe who gets the best lines and the most laughs. "I just love finding new places to wear diamonds," she says after being shown a tiara for the first time. When told that she needs to come up with $15,000, she knows to the exact minute how long it will take her to get the money out of her fiancée. "I'll need an hour and forty-five minutes." And when he presents her with an engagement ring, asking if it's the right size for her finger, she replies, "Well it can never be too big, silly." It's not that Russell is bad or not funny in the movie, she just has the misfortune of going up against one of the greatest stars of all time in the prime of her career.

As Eric intimated, while Monroe's Lorelei appears quite dumb at first, one can't help but suspect that there's more than peroxide in her head. Her discussion with the headwaiter on board the ship about who will sit at her table shows that she's not nearly as dim as most people take her to be.

I do agree with Eric's opinion of the songs. Apart from "Diamonds are a Girl's Best Friend", they're mostly enjoyably forgettable. Of course, that one number alone is enough to make this movie immortal. In fact, the song is so famous that while most people would instantly recognize it, much less of them would be able to tell you the name of the movie it came from. 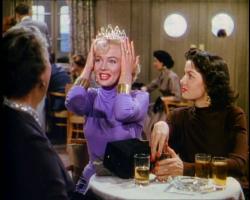 Gentlemen Prefer Blondes (based on the stage hit by Joseph Fields and Anita Loos) is 87 minutes of pure musical comedy heaven. Of course “Diamonds are a Girl’s Best Friend” is the most famous song, as well as being Monroe’s most iconic musical number, but the rest of the score is quite memorable. Both my brothers sell the other songs short.

The opening number “A Little Girl from Little Rock” sets the pace and brilliantly introduces Lorelei and Dorothy. “Anyone Here for Love” is Russell’s big number as she cavorts around a gym with the nearly nude Olympic athletes (none of whom seem the least bit interested in her female charms). “When Love Goes Wrong” is set at an outdoor café on the nighttime streets of Paris. It has a whimsical melody and nice lyrics. “Bye Bye Baby” is also catchy. Eric, don’t you remember listening to the soundtrack as kids? I could sing along to every single one of these sparkling musical gems.

Howard Hawks has to be one of the most versatile directors in Hollywood history. He helmed classic movies in many different genres. The gangster picture (Scarface), war movies (Sergeant York), comedies (Bringing Up Baby), film noir (To Have and Have Not) and Westerns (Red River) just to name one of each. With this movie he added musicals to this most impressive list.

Both Monroe and Russell are very funny in this female buddy comedy. They make like Hope and Crosby in a Road Picture, sharing adventures, their own short-hand language and getting each other out of scrapes (although Dorothy seems to rescue Lorelei more than the other way around).

I agree that Marilyn steals the movie. This is her best dumb blonde performance and her best musical performance. I like the drink she fixes to knock out the detective so she and Dorothy can search his pockets for incriminating photos of Lorelei. When he asks what is in it she innocently responds, “Just equal parts of scotch, vodka, brandy, and gin.”

I hadn’t seen this movie in many years and it didn’t just live up to my memories it exceeded them. 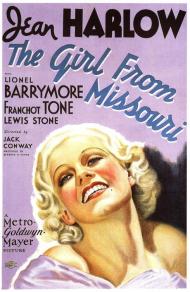