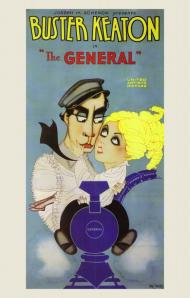 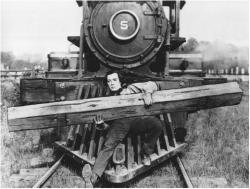 Very few movies come as close to perfection as Buster Keaton's The General. This is not only an incredibly inventive and fast-paced silent comedy; it is also an authentic American Civil War recreation, as well as being a rousing adventure story with a central romance. And all this in just seventy-five minutes!

The General tells the story of a boy and his train (oh yeah, and his girl too). When Johnnie Gray is turned down for enlistment in the Confederate army because he is too valuable as an engineer, his girl mistakenly accuses him of cowardice. Soon he has plenty of opportunity to prove her wrong when Union spies steal his beloved train, with his girl a captive on board. He follows them north behind enemy lines, rescues the girl and flees back south with the Yankees in pursuit.

This leads up to one of the most impressive shots in all of silent film. The Union train crossing the burning Rock River Bridge and then plummeting into the water below. This trick took incredibly precise timing. The bridge had to be burned far enough to collapse at the right moment but still be able to support the initial weight of the train. It is a truly breathtaking scene.

This moment is followed by a large-scale battle as the Union troops ford the river under cannon and rifle fire. These scenes have been compared in composition to authentic Mathew Brady Civil War photographs, yet they maintain Keaton's trademark visual style as well.

In my opinion The General ranks as not only a brilliant movie but as one of the premiere art works of the Twentieth Century. 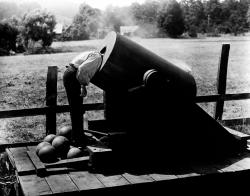 Buster Keaton was the greatest slapstick silent film comedian. Sure, Charlie Chaplin is given that credit, but I feel it is only due to his easily recognizable character, The Tramp.

Keaton rarely ever showed expression. His nickname was The Great Stone Face. Chaplin did all kinds of slapstick, from roller skating to making his shoes dance on the table as he is about to eat them. His charm was his sad expressions at being down and out and then his smile at the end of the movie where he gets the girl. Keaton did physical comedy where the joke was the action. Often putting himself in dangerous positions just for the sake of the scene. He never used a stunt man.

As Patrick wrote, The General is visually wonderful. I was completely impressed with the train crash from the bridge. Did they actually destroy a real train to make this scene? It looks that good.

Keaton's whole genius was in his planning and timing. In one scene he is standing on the front of a moving train that has a train track laid across the track in front of his oncoming train. If the train hits this rail the engine could potentially leave the track. Keaton takes another board and, just feet from the rail, throws the board and flips the rail out of the way. A simple scene to watch, but consider that there was no trick photography used and it was shot with a single camera and it becomes an interesting stunt.

Keaton was a genius and a perfectionist at setting up these scenes and stunts. I watch this movie in awe that he was able to do these things. Yet, I cannot give this movie 4 stars. I loved this film, but more so out of curiosity and history than for pure entertainment. It is a comedy, yet I did not laugh that much. I would still recommend anyone interested in silent films to definitely watch it. 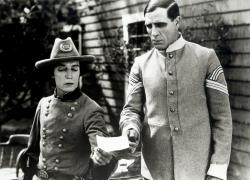 As Eric puts it so succinctly, it is easy to recommend this movie to someone interested in silent movies. However, to anyone not interested, such as myself, this movie is only so-so entertainment. I have a hard time taking any silent movie seriously as a movie. At best they're a curiosity. The only silent movie that I can think of off hand where I really cared for the characters and 'got into the story' was Clara Bow's It. All the rest are interesting at times, but in the same way that I find early computers interesting. While they provide lessons in how we got to the modern marvels we all work on today, I wouldn't want to actually use one.

That said, there are some things to enjoy about The General. Buster Keaton's physical antics can be funny at times, but really I see him more as a stuntman/acrobat, than an actor. Some of the stunts are truly impressive and quite funny. The best moments in the movie, and in fact most of the scenes in the movie, take place with Keaton chasing his stolen train. Since then, there have been many car chases in movies, but this has to be one of the only train chases. With both trains on the same track, you'd think it would be pretty boring, but Keaton's inventiveness keeps it entertaining.

While chasing the train there are many silly moments. As Eric mentioned, pushing the boards off the track as the train keeps moving, is both impressive and funny, but I also liked the moment when Keaton tries to fire the cannon from the moving train.

One thing that can be said about Silent movies is that with the absence of dialogue, film makers had to rely much more on visual imagery, which Keaton seems to be a master. The one image that sticks with me most of all is the famous shot of Keaton sitting on the drive-rod of his train, which begins to move while he remains sitting on it.