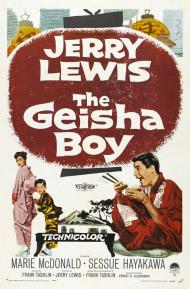 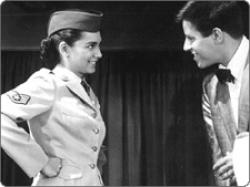 Suzanne Pleshette and Jerry Lewis in The Geisha Boy.

As children my brothers and I would stop whatever we were doing and sit mesmerized in front of the television set whenever a Jerry Lewis movie came on. His movies are great for kids. The humor is very physical and juvenile. Unfortunately as an adult I am no longer able to enjoy them like I once did. The one movie of his that still holds up for me is The Geisha Boy.

This movie is more poignant than most of his work and Jerry's character seems more like a believable person and not just the mugging, knock-kneed lunatic he usually played. He plays fifth rate magician Gilbert Wooley who joins a USO tour of the Orient because he can't get a gig Stateside. On the plane he meets Sgt. Pearson, a WAC played by Suzanne Pleshette in her movie debut, and also starlet Lola Livingstone who he proceeds to make the flight a living hell for. The antics on the plane always remind me a bit of the train scene in Some Like It Hot.

One of the oldest rules in Show Biz is that you never work with animals or children. Lewis works with both and to great effect. Wooley has a white rabbit named Harry. Harry is an amazing animal and gets some of the best laughs in the movie. Once Wooley arrives in Tokyo, he meets a beautiful interpreter with a young nephew. The boy hasn't laughed since his parents died. Wooley brings him out of his shell and they immediately bond.

Their relationship is the heart of the story and it gives Lewis one of his best dramatic screen moments. When Wooley leaves Japan to return to the States, the young boy follows him to the airport. In order to discourage him from following, Wooley yells at him and tells him he doesn't love him anymore. It is quite touching, especially for a Jerry Lewis comedy.

There are plenty of laughs also. When Wooley and the young boy attend a baseball game between a Japanese team and the Los Angeles Dodgers (this was just 2 years after they left Brooklyn) Wooley is the only one rooting for the Americans. He does a really funny heckling of the huge Japanese pitcher who also happens to be the boy's aunt's jealous boyfriend. There is also a funny spoof of The Bridge on the River Kwai

An underrated movie that is one of Jerry Lewis' best. Nearly 50 years before Bill Murray, Jerry Lewis was Lost In Translation. 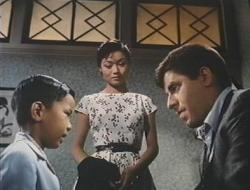 I recall loving The Geisha Boy as a kid.  I laughed at all of Jerry Lewis's funny expressions, his childlike voice and his awkward way of running.  I loved him heckling at the baseball game.   I thought Harry was the best pet ever.  Watching it now, I still enjoyed Lewis's antics but was also astounded by how touching the story is.

Lewis, as Gilbert Wooley, meets two different women who each present a possible love interest.  As Patrick wrote though, it is Gilbert's relationship to the young boy, Mitsuo, that is the heart of the story.  Other than calling Gilbert, "Mr. Wooley"  many times over, Mitsuo never speaks in English, yet they form a bond.  It is explained early on that Mitsuo laughing at Gilbert as he knocks a vain actress down some stairs is the first time he has laughed since his parents died.  Behold the power of laughter.

Their relationship is reminiscent of that between Charlie Chaplin and Jackie Coogan in The Kid.  In both films a down on his luck adult male, is loved by an orphaned boy.  The rest of the world sees these men as losers.  Chaplin was a tramp while Lewis played a hack magician.  The children in their care however, see them as a hero.  It is always clear what an adult provides for a child but these two films show what the love of a child can provide an adult.

I still loved the heckling scene and I still think Harry is a cool pet rabbit, but now The Geisha Boy has a little more meaning to me.  I also have a greater appreciation for Jerry Lewis.  Sure his comic voice is ridiculous and his man/child act occasionally slips, but I laughed throughout most of this film only to have it break my heart at the airport.  What more can you ask of a movie? 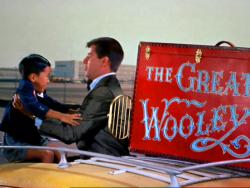 Robert Hirano and Jerry Lewis in The Geisha Boy.

Like my brothers I have a lot of fond childhood memories regarding this movie. I was actually worried about watching it now for fear that seeing it as an adult would spoil those memories.

For the first ten minutes or so, my fears seemed to be realized as Lewis's man-child shtick is almost embarrassing. His voice is kind of grating and you'd be forgiven for thinking he was mentally handicapped. I remember loving the first act on the plane as a child and like you Patrick, it reminded me a bit of the train scene in Some Like it Hot, but now while containing some funny bits with Harry, it had me worried about the rest of the movie.

As the story gets going in Japan and the young boy is introduced, the movie begins to find its rhythm. Where I enjoyed the comedy more as a child, now, like you Eric, I appreciated how touching the story really is. Mitsuo, much more than the two women, helps to ground the story. In fact, being an adult now and remembering how much I loved Jerry Lewis as a child helps to add poignancy to their relationship.

The one area of humor that did completely live up to my memory is in the character of Harry. His antics made me laugh as much today as they did all those years ago. He is deservedly listed in the credits as "Introducing Harry Hare". From his Bugs Bunny lean to getting sun burnt floating on the raft, he is a total scene stealer.

It is the relationship between Mr. Wooly and Mitsuo that makes this movie work. It seems to be leaning toward him getting together with Kimmy, but I actually thought he showed greater chemistry with Suzanne Pleshette's Sgt. Pearson. Which of the women isn't as important though as his relationship with the young boy. It's only through the love of a child that he's able to become a man himself.

So maybe it didn't live up to my memory of it, but rather than destroying a childhood memory, it simply gave me another perspective on it.